The developed world is aging rapidly and being joined by developing nations such as China, which has a huge cohort of elderly people. There are nearly one billion people over 60 worldwide and most live in higher-income countries, where life expectancies are highest. Yet retail landlords, with a few exceptions, are not providing space designed to attract the older shopper.

CBRE research compared the shopping mall experiences of European 16-24 year-olds and 55-64 year-olds and found their desires to be broadly similar, with the main differences being that the older demographic is more concerned about accessibility and much less interested in food and beverage, especially fast food. Older shoppers are also more concerned with the overall look and feel of the center.

There is also an argument that older consumers who are fit and active do not behave differently to younger shoppers. Chris Chong, deputy managing director, CapitaLand Retail Singapore, says the group’s shopping centers do not distinguish between age groups, although it does make them accessible. “We find that our older shoppers have a very young outlook; they might not be millennials but they are ‘millennial-minded’. If you look at how people in their 60s dress, it is the same as people in their 40s and they have similar shopping habits.”

Speaking at the Urban Land Institute Asia Pacific Summit in Hong Kong in June, George Hongchoy, chief executive of Link Asset Management, said: “If you look at advertisements for products aimed at people in their 70s and then go back to look at adverts from 20 years ago for people in their 50s, those photos look the same.”

However, in Japan, the country with the oldest and most rapidly aging population (25 million people are aged 70 or over), retailers and retail landlords are doing more to appeal to the older consumer.

Aeon Retail, which operates supermarkets and shopping centers across Japan, has renovated a number of malls to cater to seniors, offering earlier opening hours and social activities to encourage older shoppers. It has a target of adapting 100 sites by 2025. Changes include stocking smaller portions in the supermarket, offering health check-ups and exercise facilities, as well as more stores selling items aimed at older people.

The demographic drivers are clear. For example, an Aeon mall in the Kasai district of Tokyo, has 80,000 people in its catchment area and 44 percent are aged between 60 and 74.

The numbers in China are even more dramatic. The country’s population of over 60s is expected to exceed 255 million by 2020, up from 230 million in 2016 and equivalent to 16.7 percent of the nation’s overall population, according to the National Health and Family Planning Commission. After 2021, all new Chinese retirees will have benefited from reforms and the introduction of a more market-driven economy for the whole of their working lives, making them considerably more prosperous than previous generations.

This has pushed online retailer Alibaba to adopt a number of initiatives to attract the older demographic. One of the reasons for its $10 billion push into bricks-and-mortar retailing is the preference of older shoppers for physical stores. It has launched a special mobile app for older shoppers, which is simpler and with fewer features.

Looking to the future, the example of Japan indicates that shopping centers will need to adapt to the needs of an aging population once the number of over 70s in a market hits Japanese levels. Until then, as far as mall owners are concerned, 60 is the new 40. 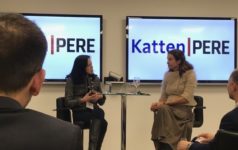