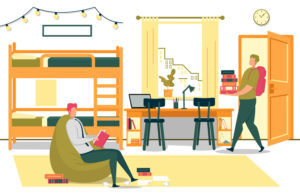 Covid-19 did not stop Global Student Accommodation Group from making its debut acquisition in US student housing, despite all the challenges triggered by the pandemic.

The London-based firm acquired 27 properties – comprising 8,000 beds across 19 US cities – from UCAL, a joint venture with University Communities and the US public pension fund California State Teachers’ Retirement System, in a deal announced last month. In addition, GSA also took over the property management company in charge of the portfolio. The purchase price for the transaction was understood to be in excess of $700 million, according to a source familiar with the transaction.

The US student housing sector was thrust into uncertainty last March when universities across the country were forced to shutter campuses and switch to virtual learning. Concerns surrounding rent collections, occupancy levels and pre-leasing for the upcoming academic year raised questions about the investment outlook for the sector. Indeed, as Jaclyn Fitts, executive vice president who co-leads CBRE’s national student housing team, told PERE, the investment community effectively went on hold during the pandemic until August and September when the academic year started. She agreed that institutional investors and international capital were especially wary because they wanted to better understand how rent collections and occupancy would shake out.

The pandemic made it difficult for groups to close transactions that were in the works before the covid-19 outbreak hit the country. Discussions for the GSA deal, for example, had started in January 2020 but the closing only happened in December.

“For covid reasons, the deal took longer than anybody could have possibly expected,” agreed Will Rowson, the firm’s chief executive. “There were challenges around seeing and [doing] due-diligence on the real estate. There was the question of the amount of equity we needed – did we have that raised? Then the debt and the way banks were looking at the sector also had an effect.”

However, the sector has managed a turnaround in terms of investing momentum. Total volume of student housing investments in the US was just shy of $4.5 billion in 2020, compared to $5.8 billion in 2019, with two sizeable transactions towards the end of the year driving up the aggregate volume, according to CBRE. A few months before the GSA transaction, TPG Real Estate Partners reportedly acquired an eight-property student housing portfolio for $478 million.

Overseas investors like GSA have become more active in US student housing during the pandemic. According to data shared by Fitts, international capital accounted for over 45 percent of transaction volume in the sector in 2020, compared with 38 percent in 2019.

“We saw more international investor interest towards the end of last year, as the fundamentals were reported, and it came to pass that the industry had performed well. The collections were better than those in multifamily,” says Fitts. “People started to realize that even though universities might be closed and only doing virtual classes, students still had a desire to be on campus learning with their friends.”

Indeed, cap rates for the sector are understood to have averaged 5.7 percent in the first half of 2020, in line with the “historical lows” in 2019, according to Newmark Knight Frank. The property services firm also noted in its mid-year market review report how the sector remained attractive with “cap rates trading approximately 40 basis points wider than its conventional multifamily counterpart.”

“Overall, the sector has benefited from substantial, and diverse, capital sources pursuing both core and value-add purpose-built assets that are within walking distance of Tier I institutions throughout the country,” highlighted the report.

Rowson believes the sector’s performance was also driven by the domestic nature of the US student housing market. Of the roughly 20 million students in the US, for instance, around 95 percent are domestic students.

“One of the surprises of last year was the yields on student housing did not move out at all. They remained completely static,” he said. “We have seen that across our global portfolio, even in parts of the world where we had lower occupancy than we saw in the US.”

Rowson told PERE the average occupancy of the portfolio has also hovered around 96 percent for a number of years, and that barely changed in 2020. Across the country, too, average occupancy rates for the sector are understood to have reduced only marginally by around 3 percent compared with the previous academic year, according to a CBRE investor survey conducted in late October.

GSA invested the equity for the transaction through an undisclosed discretionary fund that sources equity from private wealth platforms around the world. PERE understands the fund has a gross asset value of more than $1.5 billion. Meanwhile, Blackstone Real Estate Debt Strategies led the whole loan origination for the deal and Wells Fargo Bank took on the senior loan.

“The sector has proved to be resilient,” said Rowson. “Both the equity and debt worlds are seeing beyond the immediate issues for the sector.”