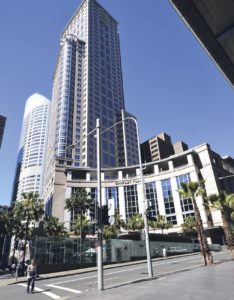 If Chifley Tower’s walls could talk, they might say it had started over with a new name, preferring to leave behind a past associated with anti-war protests and fraud charges.

These dark chapters will be far from the minds at Singapore’s sovereign wealth fund GIC, which is offloading a 50 percent stake for up to A$900 million ($616 million; €551 million).

Before Chifley Tower was built, the location belonged to Australia’s old Commonwealth government offices. By 1970, the Commonwealth Centre, built in 1962, saw almost weekly demonstrations against the Vietnam War. Students and trade unionists against conscription marched from Sydney University to Chifley Square in 1969 and conducted sit-ins in the Commonwealth Building. In 1988, the building was demolished.

The tower was originally owned and built by the Bond Corporation, entrepreneur Alan Bond’s congolomerate. The building – then known as Bond Tower – cost the firm A$306 million for the site acquisition and nearly A$1.2 billion for the development. Few other buildings rival its cost, which came 10th in a list compiled in 2014 by architectural data company Emporis of the world’s 10 most expensive skyscrapers.

While it was being built, the Bond Corporation suffered financial hardship and scandal related to its eponymous owner. A British-born and Australian-raised businessman, Alan Bond founded his company in 1959 and grew it into a property development, media, mining and brewing giant. In 1992, he pleaded guilty to deceptively siphoning off A$1.2 billion from Bell Resources into the Bond Corporation. He also declared bankruptcy, with personal debts reaching A$1.8 billion.

The tower’s leasehold was sold to the Japan-based Matsushita Investment and Development Corporation for A$405 million, according to a Sydney Morning Herald article in 2003. Australia’s Commonwealth Government took over the freehold. By 1993, it had been renamed after its location and former Australian prime minister Ben Chifley.

In April 2005, a joint venture between Morgan Stanley Real Estate Investing and GIC purchased Chifley Tower, the plaza and a golf course on the Gold Coast for approximately A$800 million after Matsushita Investment and Development Corp faced its own financial challenges, the Sydney Morning Herald reported. The Japanese firm’s real-estate investments during the bubble economy in the late 1980s resulted in an interest-bearing debt of around ¥700 billion ($6.47 billion; €5.75 billion) by 2000, the Japan Times reported in 2002.

In December 2018, Australian private equity real estate firm Charter Hall announced the acquisition of a 100 percent stake in the freehold of Chifley Tower and Plaza for A$98.5 million.

GIC is now the sole owner of Chifley Tower after buying out MSREI’s stake, but this year it has been looking once again to share ownership. Local media now report Charter Hall is looking to buy the 50 percent stake.