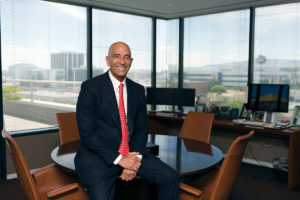 One of the questions that arose was how much reputational damage his firm, now called DigitalBridge, would suffer from Barrack’s indictment and the legal challenges ahead.

The immediate fallout could be seen in DigitalBridge’s stock performance, which reportedly fell 1.8 percent, as well as Barrack’s resignation as a member of the company’s board of directors on the day of his Tuesday arrest.

Ultimately, however, Barrack’s arrest is expected to have a limited impact on DigitalBridge. DigitalBridge, after all, had undergone a series of significant changes in the past year that effectively have created as much distance as possible between the firm and its founder. Those changes include Barrack stepping down as Colony’s chief executive last July; relocating Colony’s headquarters from Los Angeles to Boca Raton, Florida in January; Barrack resigning as executive chairman in April; Colony’s sale of the bulk of its non-digital real estate interests to Fortress Investment Group in June; and Colony rebranding to DigitalBridge in June.

Some industry insiders have speculated these corporate changes were made because Barrack and his firm were aware he was under federal investigation and his arrest was a possible or likely occurrence. Others believe his legal troubles were tied only to his executive resignations – and only partly so, as Colony’s failed 2017 three-way merger with NorthStar Asset Management and NorthStar Realty Finance is understood to have also been a factor in Barrack stepping down – and the remaining changes had more to do with Colony’s pivot to digital real estate. Either way, distancing Barrack from the firm would substantially mitigate the effect of any reputational damage on the company.

With the executive now having resigned from the board, his remaining involvement with DigitalBridge is understood to be as a shareholder with reduced voting rights and a passive limited partner in the firm’s few remaining legacy investments. These are said to include Colony’s stake in AccorInvest, the real estate holding company of Paris-based hospitality company AccorHotels, which was acquired as part of a €4.4 billion consortium deal in 2018. Only a few Colony investment veterans, such as Jonathan Grunzweig, now DigitalBridge’s chief investment officer of other equity and debt, continue to work at the firm.

In short, the end of Colony, which made a name for itself investing in non-performing loans during the 1990s and was one of the top private equity real estate firms prior to the global financial crisis, has been a long time coming. After several ill-advised deals put an end to the firm’s traditional opportunistic investments post-GFC, Colony shifted its focus to other real estate strategies, notably debt and industrial.

But it was never able to return to its former glory days as a high-octane-returning distressed investor. Barrack’s departure from the firm and the erasure of the name it bore for 30 years further underscores the fact that Colony Capital is no more. As such, the industry veteran’s arrest will have little bearing on a firm where few traces of him remain.