Speak to hospitality pros and they’ll tell you about the specialized expertise it takes to run a successful hotel, with hard decisions needing to be made about everything from the restaurants and bars to sheet thread-counts and mini-bar selection. On top of all that, it’s a risky business that is particularly susceptible to everything from economic downturns to geopolitical strife.

So it may be surprising that David Geffen and Larry Ellison are both looking to get into the luxury hotel game. Not only that, but they’re doing it within the same zip code. Geffen, who made his name as a record label mogul, and computer software magnate Ellison are both opening hotels in the exclusive beach community of Malibu, California.

Ellison, according to The New York Times, recently acquired the 21-room Casa Malibu Inn for $20 million (€15 million), while Geffen scooped up the Malibu Beach Inn for $29 million in 2005, which will soon reopen as a 47-room luxury hotel. Despite both men’s reputation for cut-throat competitiveness, their hotel rivalry might not be that fierce. In addition to sharing the town’s lodging market, Geffen and Ellison also co-own a yacht together.

The celebrity-and-tycoon Malibu crowd seemed generally supportive of the idea. Former LA mayor and neighbor Richard Riordan opined to the paper: “The word gentrification is used when wealthy people move into a new neighborhood and fix it up. But when it is billionaires taking over from multimillionaires, I’m not sure what you call that.”

Celebrity chef Wolfgang Puck felt the addition of Ellison, the world’s 11th richest man, was good for the neighborhood as well, comparing the glitzy California enclave to another wealthy area on the East Coast.

“I think it’s great that someone like Larry Ellison comes in,” he said. “If he is going to park his yacht there, it will be the new Hamptons. For awhile, Malibu was hot. Then everyone went to the Hamptons. Maybe it is going to be hot again.”

The digital opportunity in sub-Saharan Africa 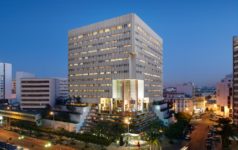