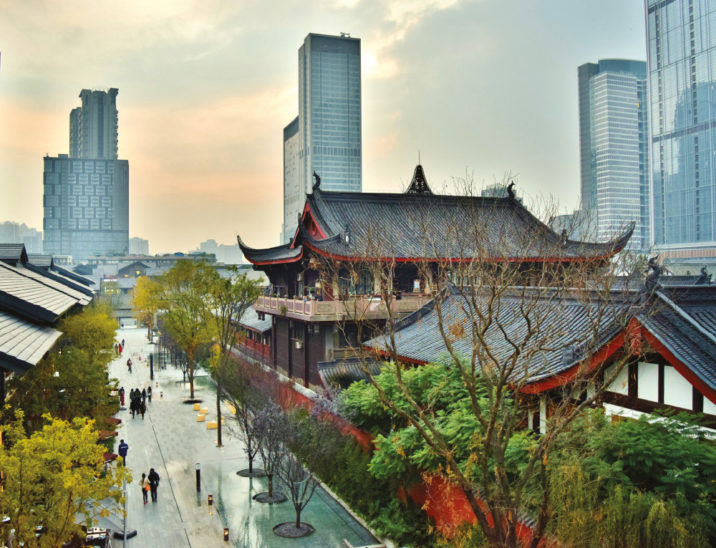 China is growing in importance as a center of investment management. PERE research shows that more capital is being raised for Asia-Pacific real estate by managers based in China than in any other location. China managers are in the market to raise $5.5 billion in equity, ahead of US peers, which are looking to raise $4.6 billion for Asia-Pacific real estate.
MSCI ranks China as the second-largest real estate market in Asia-Pacific and the fourth-largest in the world, behind the US, the UK and Japan. However, in real estate transactions, China leapfrogged Japan in the second quarter of 2020, showing a remarkable recovery after being the first country to be hit by the coronavirus pandemic. Real Capital Analytics data show China transactions rose 95 percent year-on-year to $8.4 billion.

In the first-tier cities of Shanghai and Beijing, foreign investors are well-established and many regard these cities as developed markets. However, the first half of 2020 saw more foreign investment in secondary cities such as Guangzhou, Nanjing and Hangzhou.
This sharp increase in transactions is paralleled by a similar increase in real estate fundraising. PERE data show two China real estate funds closed in the first half of 2020, raising a total of $2.9 billion in equity, which is considerably more than the $1.2 billion raised by three funds in the whole of 2019 and close to the 2018 total of $3.1 billion, suggesting investors have reacted enthusiastically to China’s handling of – and relatively swift exit from – the covid-19 pandemic.

Undercutting the enthusiasm of investors for China, the geopolitical situation is an increasing risk, as tension between China and several other countries escalates further. “The phase-two trade deal with the US is unlikely to be finalized this year, while Hong Kong’s new National Security Law, a border conflict with India and territorial disputes in the South China Sea may inhibit business expansion,” a CBRE report warned in August.
As in other markets, logistics real estate in China shone during the lockdown period and has remained resilient, with brokers reporting steady yields. The ongoing US-China trade conflict might hurt manufacturing. However, demand for modern logistics space is driven by domestic consumption and online retail, both of which are growing strongly. The increase in online traffic has also boosted demand from both end-users and investors for data centers. In June, for example, Blackstone Group’s Tactical Opportunities division invested 1.06 billion yuan ($155 million; €130 million) in NASDAQ-listed Chinese data center developer 21Vianet Group via a private placement.

The office sector has also been surprisingly resilient, with positive net absorption in the second quarter of 2020, according to CBRE data, and delays to office supply keeping vacancy rates from shooting up across the country. The office market is increasingly driven by the booming domestic technology sector, while homegrown financial services companies are also expanding their real estate footprint.

Retail real estate in China has developed alongside e-commerce and most malls have proven resilient to the challenges of internet retail. However, the lockdown diverted so much consumer spending online that retailers all over the country have found it difficult to cope. Somewhat unexpectedly, neighborhood retail has faltered while luxury brands have recovered sharply, as travel restrictions have prevented Chinese high-end shoppers from buying their goods overseas.

The residential real estate market has been relatively stable overall, with sales in the first seven months of 2020 down only 2.1 percent, after a sharp recovery following an almost total market shutdown during lockdown. In the longer term, demand is expected to remain strong, however government policy is set to remain the major headwind, as regulators continue to seek financial stability. Overall debt levels are a major concern and in August, 12 developers – including some of the nation’s largest – were requested to submit deleveraging proposals.

Meanwhile, commercial developers have also found their balance sheets stretched by the pandemic. Daniel Yao, head of research at JLL China, says: “In the commercial property market, generally we have seen a greater focus on refinancing compared with new financing. Covid-19 has made the operating environment more challenging, especially for commercial developers, increasing the need for financing extensions. Small-to-medium-sized developers lack the same level of access to financing and support, which could lead some of these firms to pursue joint venture opportunities with larger partners.”
Structured lending is also likely to be an opportunity for private equity real estate investors. A number of Asia-Pacific funds have the capacity to provide mezzanine or ‘stretched senior’ lending to domestic developers and the capability to deal with the assets themselves should they be forced to foreclose.

A number of private equity groups are betting that the rapid growth of debt in China plus ongoing government restrictions on borrowers will lead to more non-performing loans and more opportunities to acquire them. As part of the phase-one trade deal signed by the US and China in January, US investment managers will be able to apply for asset management licenses, enabling them to buy NPLs directly from banks, rather than via local bad loan companies. A number of foreign investors have bought NPL portfolios in recent years, including Lone Star, Blackstone Group and Oaktree Capital Management, the latter of which set up a Chinese asset management unit in February to boost its presence in the wider NPL market.

Bad loans make up around 2 percent of Chinese banks’ loan books officially, although many believe the real total is higher, and a majority of loans are backed by real estate, which adds up to a significant opportunity. However, there are a number of obstacles: the often fragmented loan portfolios, which may be secured on a myriad of smaller assets in lower-tier cities and the requirement for local knowledge in dealing with them. Investors also consistently report that bargain prices are hard to find, especially if they are targeting assets in first and second-tier cities.