During the covid-19 pandemic, the South Korean e-commerce penetration rate, already among the world’s highest, increased more than 6 percent year-on-year to 30 percent in 2020.

Even before the pandemic, industrial factors including IT industry development and mobile phone supply, and social trends such growth in single-person households, were driving the high penetration rate.

The increase in single-person households, to 30 percent of all households across the nation, is leading to growth in the number of SKUs and the quantity of products – mainly centered on small-quantity batch production – handled by logistics centers.

As a result, the development and operational methods of e-commerce and 3PL centers are changing. Logistics properties are becoming a core asset in the South Korean real estate market, and their importance is expected to continue growing in the future.

In that time period, growth averaged 9.7 percent per year. Most centers are located in metropolitan areas with high population density, and expansion is shifting from the south and west to the east.

Rent is increasing about 1 percent per year; ranging from 8,055 won ($6.74; €5.90) per square foot for room temperature logistics and 17,280 won per square foot for low temperature logistics. The vacancy rate is 8 percent and the cap rate is 4.3 percent, which is less than half of the 2011 peak but higher than the return for offices in the country.

Cap rates have fallen because of high land costs and increased competition, as well as the difficulty in acquiring permits for logistics centers and in securing large-scale sites. Prime, large-scale logistics centers larger than 350,000 square feet are seeing asset values increase an average of 13 percent per year.

Until recently, the Korean distribution market primarily took place offline, mainly the hold of conglomerates such as Shinsegae, Lotte and Hyundai Group, through department stores GMS, SSM and CVS. However, new e-commerce players and platforms, such as Coupang, Market Kurly and Naver, are changing the retail landscape.

The characteristics and success factors of the major players in the Korean e-commerce market can be summarized into the following three categories:

From its start as a social commerce business in 2014, Coupang has established itself as a game changer in Korean e-commerce; it is often referred to as the ‘Amazon of Korea.’ Using its fleet of delivery personnel, Coupang’s ‘Rocket’ delivery system guarantees next-day delivery for orders placed by midnight, and its Rocket Wow membership service for 4,990 won ($4.15) per month guarantees free delivery regardless of purchase amount. The Rocket Fresh service focuses on fresh products and delivers products early the next day, when the order is placed before 7pm, and same-day delivery at night when the order is placed before 9am.

Market Kurly, which first introduced the concept of early morning delivery in Korea, provides curated, high-quality fresh food with high-quality delivery, capturing market share among the trendy, younger generation. Orders – such as seafood, meat and vegetables – placed before 11pm will be delivered by 7am the next morning in time for breakfast.

These same- or next-day delivery guarantees have been a hit; 31 percent of Koreans use Coupang. In 2021, it reported gross merchandise volume (GMV) of 16.1 trillion won ($13.4 billion), a 61 percent increase from the previous year. Market Kurly’s GMV grew 67 percent from the prior year to 0.7 trillion won. Although growth has been impressive, both companies are operating at a loss due to heavy investments in logistics and delivery. Still, Coupang is expanding its logistics centers through IPO proceeds and Market Kurly received Series F investment to put into innovation.

Conventional, offline-based retail companies, which had been slow to respond to changing trends and both Coupang’s and Market Kurly’s growth, are now jumping on the early morning and same-day delivery bandwagon. Traditional retailers, such as Shinsegae and Lotte, are seeking to take the lead on quick delivery services by offering short delivery times within three hours, an hour and even 30 minutes through their brick-and-mortar stores. 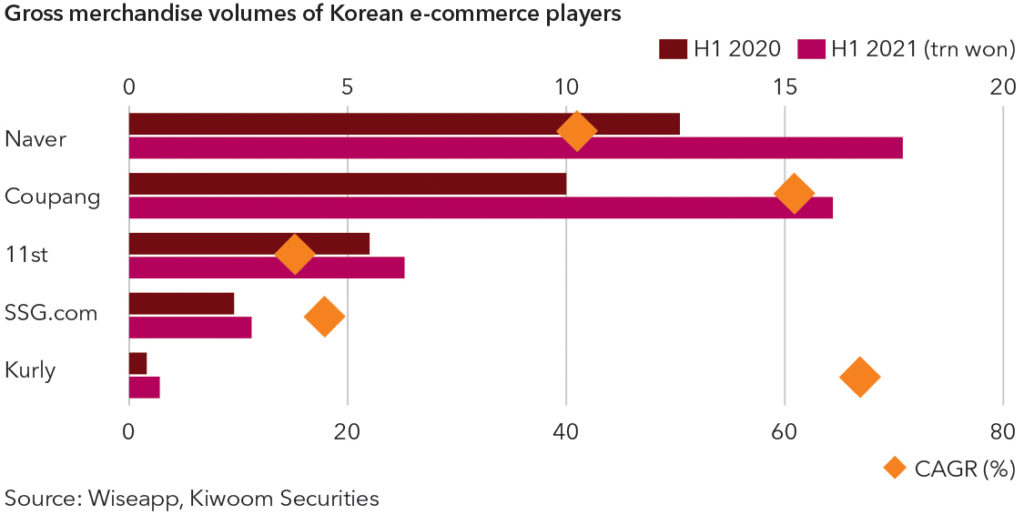 Korean web platforms such as Naver and Kakao have emerged as formidable opponents against the explosive growth of Coupang. They operate an open market based on their capacity for huge traffic and the competitiveness of their platform. Naver has the country’s largest GMV at 17.7 trillion won, and Kakao has been growing rapidly with the rollout of a social commerce campaign called Gifts. Both companies are expanding market share by using their platforms to connect manufacturers and consumers, rather than storing and selling their inventory, while working with 3PL companies on logistics.

With large amounts of investment and intensification of competition come concerns about diminishing profitability and oversupply of logistics centers. The growth of logistics centers have not come without a price – there have been fires, higher labor costs and a tightening of logistics-related regulations.

However, the nation’s explosive e-commerce growth is requiring a large number of logistics facilities to be built to meet demand. New facilities are increasingly becoming build-to-suit, unlike the existing practice of building and renting out a center. Within cities, assets that have depreciated in value are being repurposed into micro-fulfillment centers (MFC). Mesh Korea, for example, pivoted from its MFC target strategy of last-mile shipping to total fulfillment, providing inventory storage, picking products, packaging, shipping and handling.

Coupang has over 170 logistics centers, totaling 24 million square feet (equivalent to the size of 40 football fields). It is investing 2 trillion won to build an additional 35 million square feet of large-scale fulfillment logistics
centers in seven regions across the nation, aiming for every household in the country to be within six miles of one of its logistics centers by 2025.

Market Kurly is building a full cold chain, handling logistics from warehousing to storage and delivery according to each product’s appropriate temperature. It plans to develop a 1 million-square-foot complex logistics center encompassing cold storage and dry storage logistics.

Shinsegae Group plans to use offline stores together with NEO, a nextgeneration online-only logistics center, to establish logistics infrastructure nationwide. Currently, there are three NEO centers, totaling 1.15 million square feet, operated by SSG.com. In addition, 110 pick and pack centers located across the country utilize E-Mart stores, Shinsegae’s subsidiary, to handle online logistics. E-Mart plans to expand the number of pick and pack centers to 160 through additional store renewals, and to develop a large-scale logistics center worth more than 1 trillion won.