Money will keep pouring into private real estate, according to the results of the annual 2015 PERE Investor Perspectives Survey.

PERE’s Research & Analytics division polled numerous investors and found the central message summed up by Anthony Breault, senior real estate investment officer for the Office of the Oregon State Treasurer, who said: “I really like the fundamentals – it’s an exciting time to be investing.”

That said, investors have few other choices. With investment yields low around the world, limited partners plan to stay committed to income-producing commercial real estate, seeking to protect themselves from potential losses by choosing strong markets and strong partners. To many of these investors, commercial real estate looks expensive, except compared to everything else.

Alain Dumaine, senior vice president, global portfolio management and strategic planning at Canada’s Ivanhoé Cambridge’ said: “Because we are going deeper into the cycle, we are less confident about real estate. Are we well-rewarded for the risk, and what are the alternatives?”

Less confident, still investing
Nearly 100 real estate investment specialists responded to the survey. Of those respondents, more than a third (37 percent) were less confident about private real estate over the next 12 months than they were about the last 12 months. Only about a quarter (28 percent) said that they were more confident than they were last year. When PERE asked the same question in 2014, more than half were more confident than the year before and only 21 percent were less confident.

Investors will continue to allocate more money to private real estate. However, spending that money on real estate is likely to be difficult, because property prices are so high and investor yields are so low.

“The market is more of a seller’s market than a buyer’s market,” said Breault. The pension funds he manages for the State of Oregon have less money invested in real estate than the fund has allocated. “I am under-allocated. We’ve been there for a while, and we don’t expect that to change.”

Where in the world
Real estate investors are looking in every corner of the globe for opportunities to invest, though they often end up investing in familiar markets close to home.
An overwhelming majority, some 82 percent, said the US was one of the five developed countries where they expected to find the most attractive opportunities to invest in real estate over the next 12 months.

“The US is very attractive,” said Christian Michel, portfolio manager for indirect assets at Adimmo AG, based in Basel, Switzerland. “The US is much further in the real estate cycle than Europe, but is still a place for rental growth and value growth.”

Western Europe is also drawing investors. More investors say they prefer Western Europe as a region to invest in than even North America, overall. That’s partly because it’s still possible to find distressed properties at attractive investment yields. “Europe would be number one,” said Robert Negrelli, senior consultant with Courtland Partners, headquartered in Cleveland, Ohio. “The distress is getting a lot of attention. It’s possible to acquire properties at a discount.”

Even investors who said European monetary policy was their top concern, expected to find the better real estate investment opportunities in the Western European nations including Spain, the UK and Germany, compared to other developed countries like Australia, Japan, Canada and Korea.

Among emerging markets, there is little consensus on where to find attractive opportunities. More than half of respondents listed India as one of their five nations most likely to provide the most attractive opportunities. However, investors still worry that the Indian government may not succeed in implementing enough reforms to make the country a predictable place to do business.

“Foreign managers can’t invest in India without a local partner,” said Jason Post, senior vice president for the Meketa Investment Group, based in Westwood, Massachusetts.
Mexico came in second; close to half of respondents listed the central American country as one of the top five emerging markets for opportunities. “In Mexico, the confidence in real estate has improved in the last 12 months,” said Felipe Vilá Gonzalez, chief executive office of Fondo de Fondos.

China came in third one of the top emerging markets for opportunities. However, slowing growth in China now worries even investors who favor private real estate funds focused on Asia. “China is definitely a concern,” said Courtland’s Negrelli. “Japan and Australia are providing opportunities,” he pointed out. Both of those developed Asian markets are listed by a significant number of respondents as top developed markets for investment.

Despite willingness to look overseas, investors agreed that the best opportunities were often in their own backyard. Nearly two thirds of institutions based in North America include Brazil in their top five nations most likely to provide the most attractive opportunities, compared to less than half of respondents overall. Nearly two thirds also look to Mexico, compared to just 48 percent of respondents overall.

Less than one-in-ten investors planned to invest in real estate funds focused only on Eastern and Central Europe, not including Germany. Poland stands out in a positive way among Eastern European countries – 39 percent of respondents include Poland in their list of the top five emerging markets. “I see a big opportunity in commercial real estate in Eastern Europe,” said Patrick Wigan, president of Wigan Acquisitions, based in Budapest, Hungary. 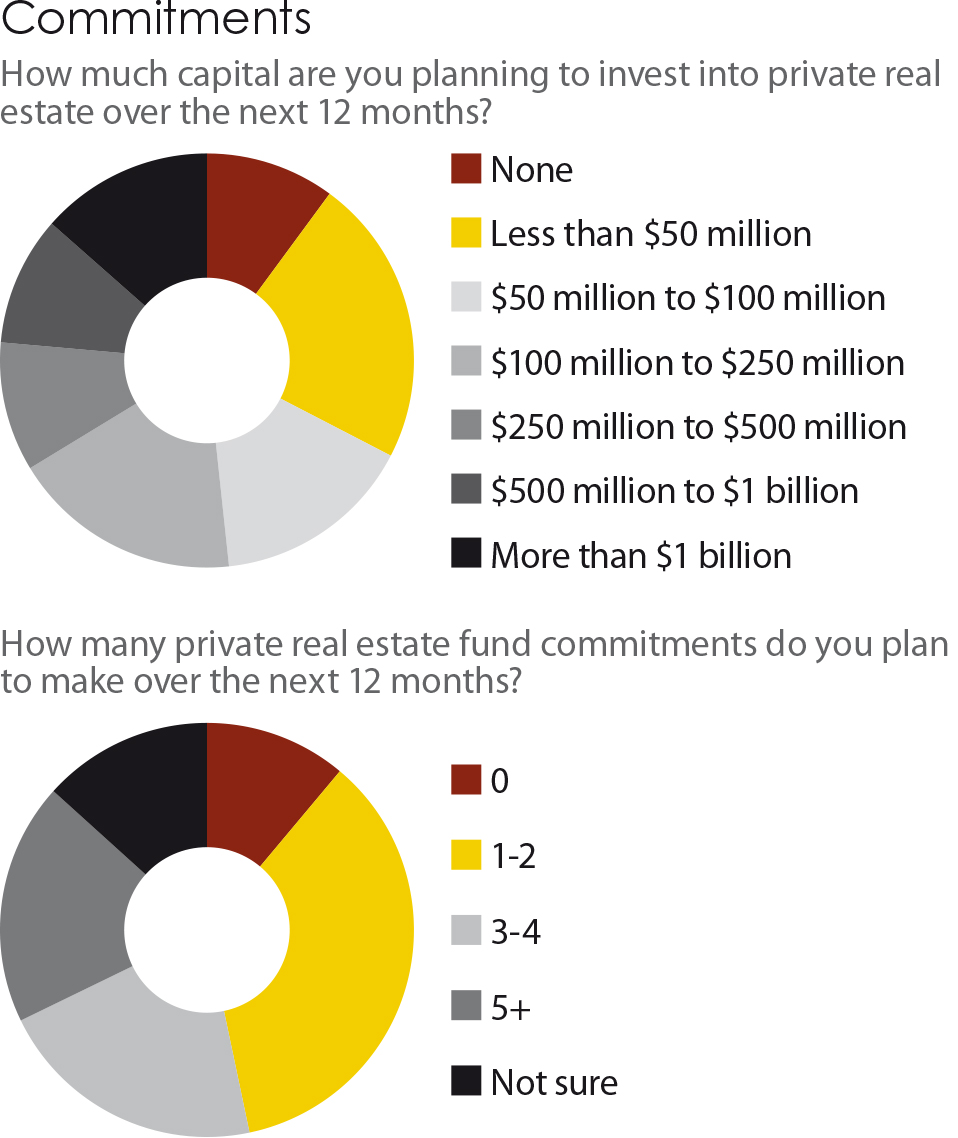 On the other hand, private equity fund managers have to compete to get that money into their particular funds. First, they’ll need to provide some value that the investors cannot provide for themselves. Investors are more than capable of buying and managing their own portfolios of properties. Nearly half (46 percent) said they planned to make direct investments in real estate properties over the next 12 months.

However, not every investor possesses the time or the staff resources to own and manage properties directly. “Funds work well with most clients. They talk about doing direct investments, but they don’t have the staff time,” pointed out Courtland’s Negrelli.
About three quarters of respondents said they aspired to make private real estate fund commitments over the next 12 months, typically between one and four commitments. About two thirds planned to invest in closed-ended funds over the next 12 months. About one third planned to invest in open-ended funds.

“We all want to be with funds with which we can have co-investment opportunities,” confirmed Dumaine of Ivanhoé Cambridge.

Fund versus fund
To attract capital, fund managers also need to stand out from other funds.
A manager’s track record is the top overall criteria for selecting a private equity fund manager, according to survey respondents. “The days of buying cheap, where anyone can make money, are past us. Managers need to have operational experience,” said Post of Meketa Investment Group.

Investors overall put track record above every other criteria, from strategy to the size of the fund manager’s fee. Nearly half of the individual investors surveyed said the manager’s track record was the most important criteria in selecting a fund manager.
With strong competition between funds to attract investors, first-time managers can be at a sharp disadvantage. That is reflected by about half of respondents – 46 percent – having no plans to even consider investing with a first-time manager in the next 12 months. About a third said they would consider first-time managers, but only one-in-six said they actually planned to invest with first-timers. Even investors willing to consider first-time managers wanted to see that they have passed a few milestones, such as closing their first round of investment.

As investors chose which fund managers to cut, they look at some of biggest problems they have with managers. About half of respondents said lack of reliable performance metrics and benchmarks was one of the top three portfolio management issues that were deemed the most important.

Roughly a third of respondents said the J curve was a top issue, meaning investments in which performance starts negative before eventually becoming positive potentially having a negative impact on the reports that investors have to make during the difficult, early period.

All of the above

Investors are most likely to increase their volume of value-added investments this year. More than half of respondents said they would increase or start investing in value-added real estate over the next year.

Opportunistic investments will also get extra attention. Half of respondents planned to increase the amount they invested or start investing in opportunistic real estate investments. Only 8 percent planned to cut back.

Secondary markets
A few more investors are also putting money into the secondary market for private real estate. “I like ‘late stage’ investing,” said Oregon’s Breault. He recently invested with Landmark Partners, a real estate secondary expert. “You can underwrite the actual deals in the fund. We like that.”

And in terms of asset classes, offices are said to be more attractive to real estate investors than multifamily, according to survey respondents. Multifamily, which has been a highly desirable property type for several years, came in second. “We are slowly souring on multifamily,” said Meketa’s Post. The large number of new apartments now under construction and high property prices are dimming the outlook. However, many limited partners are still willing to pay high prices for apartments.

Retail and industrial properties round out the list of the top property types. More than half of respondents picked them are preferred sectors for real estate investment.
Investors are also now more interested in niche property types that performed well during the global financial crisis.