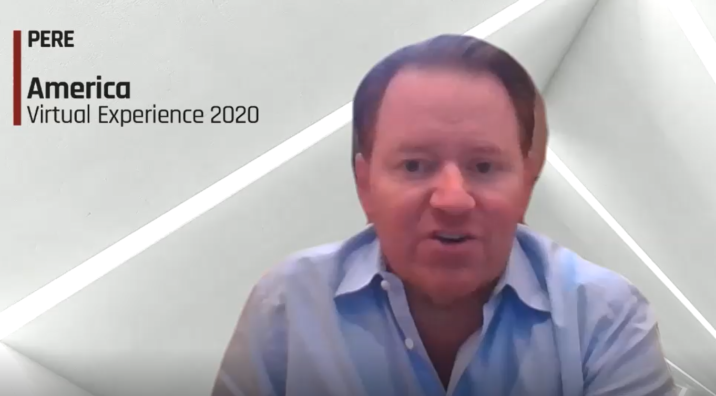 Marc Ganzi’s ‘new administration’ at Colony Capital is not going to have the same proximity to government as the firm’s previous leadership. But, just days after Joe Biden was all but officially confirmed as the next US president, the executive could not avoid talking about politics entirely.

Indeed, among the highlights of his 40-minute keynote interview at last month’s virtual PERE America conference with PEI Real Estate Group senior editor Jonathan Brasse, were his reactions to a Biden victory. That news came just days before pharmaceutical giant Pfizer and partner Biontech announced successful trials of a vaccine against the coronavirus pandemic which has plagued global economies for the best part of 2020. On November 9, the day before the interview, the double news had listed stocks soaring across industries, property included. The FTSE NAREIT All Equities REITs index of US real estate investment trusts rose 8.9 percent on the day.

Ganzi met the news with sobriety. “I try to tell my management, don’t let the highs get too high and the lows get too low because information in this era comes so fast,” he said. Circumspect in his reaction to the events, the Colony boss said: “The Pfizer announcement was good news, but not unexpected. Whether you’re red, blue or purple, most of us who are intelligent had pretty good reconnaissance on this matter and knew it was coming in a matter of weeks.”

While both the Biden election victory and a successful vaccine are news to be celebrated, the world will not return to normal overnight, he said: “Those aren’t the total elixirs. There are other things happening that are still fundamentally a challenge: getting people back to work, getting the supply chain back online, there are significant trade agreements we still have to work out. The world still is not in a perfect place, though this is a start.”

Colony Capital, founded by high profile property veteran and Donald Trump supporter Thomas Barrack in 1991, has become a household name in private equity real estate investing, targeting a wide array of property types. Three years ago, the $47 billion manager embarked on a strategy to refocus its resources on real estate which can physically accommodate the exponentially growing use of data by companies. The strategic pivot to so-called digital real estate was catalyzed with the purchase of Ganzi’s former company Digital Bridge Holdings last year and his assumption of the chief executive officer role in July.

This has meant selling out of all other sectors, with Colony having “rotated $45 billion of AUM in just six quarters,” according to Ganzi. Meanwhile, the firm has “deployed $20 billion in digital infrastructure in eight transactions,” is expected to seal two more deals this quarter and has three further deals under exclusivity. Next year, armed with a cash war chest of $900 million, the firm plans to tackle a pipeline of 40-plus more deals valued at another $20 billion. “Our foot is down on the gas pedal,” he told delegates.

But while the buying part of Colony’s rotation strategy remains unaffected by the news from Capitol Hill and Pfizer, its disposal strategy must take into consideration the continued uncertainty brought by covid-19, said Ganzi. Offices, logistics and, most recently, hotels have been offloaded. But exits for Colony’s healthcare real estate and mortgage REIT businesses must still be carefully timed to take advantage of any improving sentiment materializing during what he thinks will be a continuous period of disruption. “We believe the vaccine will start being deployed in January of next year and wholesale deployment concludes in May or June next year with people who wish to take it. We still feel there is another four to seven months of disruption.”

Ganzi said the impact of the Biden administration’s policies on private real estate market will also not be apparent immediately, either. He will be watching policy around international relations with China, particularly the US’s post-Trump treatment of telecoms provider Huawei, treatment of social media giants like Facebook, and the influence of potential anti-capitalist cabinet appointments.

Regardless of who is appointed, he did not envisage embroiling himself in US politics like his high-profile predecessor, who had become as famous for his friendship and support of outgoing president Donald Trump as his business activities. “I had the privilege of working in government in DC,” Ganzi said. “I’ve gotten to see how that machine works. But as a CEO, I don’t have the ability to opine in one way or the other. What’s most important are the customers who count on my every day.”

Ganzi also has advised the US Securities & Exchange Commission on developing its digital policy, work he remains committed to. “When called upon by the country to help digital infrastructure policy, I’ll always serve my country. But the new administration at Colony Capital is politically neutral,” he said.