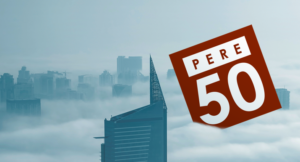 Now, we present the top five in our countdown…

Washington, DC-based Carlyle has ebbed and flowed as an international private equity real estate firm, its European platform going through something of a renaissance, while its Asia business is today greatly reduced.

Motoring on has been Carlyle’s US business, which has performed strongly and been rewarded for its efforts with enviable capital support. Carlyle Realty Partners VIII, the latest of its North American products, was launched last May and has corralled $5.24 billion from investors in the 12 months since.

Predecessor vehicle CRP VII pulled in $4.2 billion at final close at the end of 2014 and is producing an equity multiple of 1.4x, according to investor documents, while CRP VI, which falls outside of the ranking’s catchment timeframe, generated a 21 percent IRR.

The series dominates Carlyle’s ranking, but European capital should play a greater role in future. Some investors have looked beyond its poorly performing third Europe fund, and helped the firm to a $330 million first closing for a rebranded fourth vehicle.

John Grayken’s Lone Star Funds runs two major series of private equity funds. One is primarily focused on opportunistic real estate outlays and this is the series included in the firm’s PERE 50 ranking. It sits proudly among the market’s mega-fund managers, its subscriptions often hit target, sometimes hard-caps and unlike many managers in the sector, its marketing efforts can be relatively brief affairs.

However, with no new capital to add to its five-year total, it has slipped to fourth place this year. Qualifying funds include 2013’s $7 billion Lone Star Real Estate Fund III, 2015’s $5.8 billion Fund IV and 2016’s Fund V, which corralled a similar amount. Whether the firm claws back this lost ground next year remains to be seen, with greater noises being made about exits and establishing a core investment management capability via its asset management and loan servicing affiliate Hudson Advisors.

Private real estate’s third $20 billion-plus club member, like Blackstone and Brookfield, Starwood has been another beneficiary of a growing tendency among the world’s biggest institutional investors to back fewer managers with bigger equity tickets. Barry Sternlicht’s firm made its biggest fundraising headline in March with the closing of $7.6 billion for Starwood Global Opportunity Fund XI, the Miami-based firm’s biggest capital raise to date. The raising blasted past its original $5 billion-$6 billion target, and was also $2 billion more than its predecessor vehicle in 2015. Markets have become toppy, but Starwood’s investors have been impressed with its ability to continue transacting. Indeed, Fund XI was already $1 billion invested or committed when PERE reported on its final closing, including significant outlays in the US, perceived by most to be the most advanced market in the current cycle. The series is 26 years old but remains firmly in growth mode.

If Blackstone was to fail, it would be Toronto’s Brookfield that would pick up the torch. Brookfield’s own capital-raising exploits are also putting some breathing space between itself and third place Starwood Capital. Its fundraising prowess has come via its global opportunity fund series Brookfield Strategic Real Estate Partners. Now on its third iteration, the firm is poised to close on $10 billion for BSREP III after holding two quick closings in recent months. The fundraise, Brookfield’s biggest yet, slightly exceeds BSREP II, which attracted $9 billion from investors by its final closing in April 2016. Like Blackstone, Brookfield can point to impressive returns made at increasing scale as the reason for its support. According to one investor report, the $4.4 billion BSREP I generated an IRR of 19.5 percent and an equity multiple of 1.6x as of last June. Not bad for a series that is only five years old.

The chasing pack is drawing closer but still way off truly competing with Blackstone as the private real estate sector’s leading equity sponge. While markets top out in the New York-headquartered firm’s US heartland, its recent fundraising successes have been in Europe and Asia. In both regions, the firm has bettered its own record raises within a 12-month period, first hauling $7.8 billion for Blackstone Real Estate Europe V last June, before collecting $7 billion for Blackstone Real Estate Asia II last month. Blackstone funds are often oversubscribed; such is the magnetism of a series boasting net realized IRRs of 19 percent and 2x multiple from a cool $94.5 billion of equity deployed since its inception in 1994, according to its Q4 earnings. With numbers like that, it is of little wonder division boss Jon Gray was elevated to company president this year. He leaves big shoes to fill, but with another $32.3 billion in dry powder at the firm’s disposal, he will expect successors Ken Caplan and Kathleen McCarthy to keep the chasing pack at bay.

Private real estate has evolved, but not as much as you might think