This article was sponsored by MIRA Real Estate. It appeared in the Global Investor 50 special section, alongside PERE’s November 2019 issue.

Despite rising political tensions and softer global growth, direct real estate performance around the world has remained broadly solid in 2019. The upward pressure on property values, excluding retail, due to lower interest rates has more than offset any concerns about softer global growth and weaker tenant demand.

More so than previous cycles, risk assets are being supported by central banks placing more emphasis on keeping equity markets stable, either as a deliberate strategy, given historical linkages with GDP growth, or as a result of political pressure. And investor sentiment in real estate has been boosted by renewed monetary stimulus this year, led by the US.

Real estate fundamentals remain solid and supportive of inflation-like rental uplifts across the majority of the market and sectors in 2020.

Logistics, certain niche segments – manufactured homes in the US and data centers, for example – and supply-constrained apartments and office markets are seeing stronger growth while retail is generally weak in the US, Europe and Australia. Beyond pockets of oversupply – offices in some major financial-hub cities – and shadow space from retailer closures, construction levels and starts remain well contained relative to previous cycles.

Better visibility on the supply outlook means that demand is the most important input for underwriting long-term investments. Here, ongoing resilience of the US services and consumer sectors warrant close monitoring, particularly linkages between business sentiment, hiring and consumer confidence. In the past, services sector surveys typically follow weaker manufacturing with a lag.

The US political cycle is also prolonging the upswing as President Trump pulls out all stops to maintain a solid economy into 2H20.

A sustained acceleration in real estate returns from here would come via a de-escalation of US-China trade wars combined with significant policy stimulus from infrastructure spending. Importantly, the latter is likely to come through as China’s top-down policy response kicks into gear over the coming quarters to stabilize its nominal GDP growth.

Real estate values would soften in a global recessionary scenario, consistent with previous cycles, as global equities and corporate bonds come under pressure and investors find themselves underweight stocks. 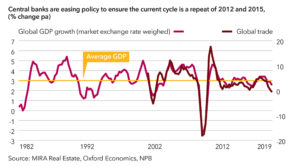 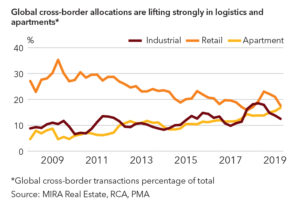 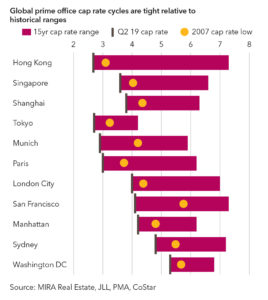 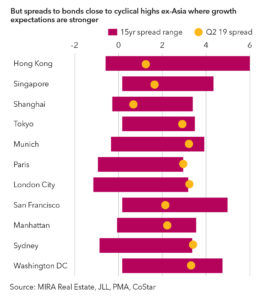 Cap rates are tight across markets relative to historical averages and prior peaks at 50-100 basis points below pre-2007 lows after adjusting for tenant concessions, increasing cap-ex and lease duration.

Elevated property spreads to bonds provide some buffer for pricing, but this is only part of the story. Many parts of Asia had positive spreads prior to the 2008 downturn and retail values are under pressure despite elevated spreads in key developed markets. Fundamentals are equally important in driving total returns.

Global transactional activity remains solid with domestic and cross-border investors continuing to deploy capital given low/negative global cash returns and accommodative debt markets in the US and eurozone, particularly in the favored industrial and rental housing sectors.

By sector, cross-border activity remains focused on offices with the sector representing 44 percent of cross border investments over the past 12 months. Cross-border office activity is supported by the relative ease of execution in this sector, particularly for large investments, high liquidity supporting exit strategies and a better understanding of the economic drivers of global cities.

In other sectors, the ongoing shift out of retail in weak catchments continues, with industrial and rental housing – 13 percent and 17 percent of cross border capital respectively – and niche segments the key winners. Not surprisingly, pricing is adjusting accordingly in both listed and unlisted markets in these sectors.

According to Real Capital Analytics, cross-border capital flows remain solid at $218 billion over the past 12 months, which is in line with its three-year average. Capital has been equally sourced from regional and global investors. US and European markets continue to receive the highest share of cross-border capital at $80 billion and $110 billion over the past 12 months, respectively, but Asia has seen the strongest growth over the past decade. With global investors generally underweight in their Asian real estate allocations cross-border activity into the region will continue to grow over the coming decades.

Looking ahead, investors are still very keen to deploy capital as the stock of negative yielding bonds continues to grow. Elevated levels of dry powder points to ongoing strength of investment activity over the next year despite elevated political risks. Any softening in geopolitical and global macro risks would be clear positives for risk sentiment and global capital flows.

Outlook for the year ahead

Central banks are increasingly recognizing the difficulty in escaping from a low inflation environment, despite considerable monetary expansion over the past decade.

The likelihood of a structurally slower global growth is rising as the combined deflationary forces of a slowing working-age population and technology become more apparent on inflation, rates and returns.

In this world, bond yields remain low/negative and global cap rates and total returns grind lower over the medium term before converging at low levels compared to historical averages of 250-300 bps over 10Y bonds. Yields are already at these levels in Germany, Japan, Hong Kong and Switzerland.

Although lower than average, property cap rates would still be relatively attractive in an environment where the stock of positive yielding assets is shrinking.

Redeployment of capital is the biggest challenge facing investors