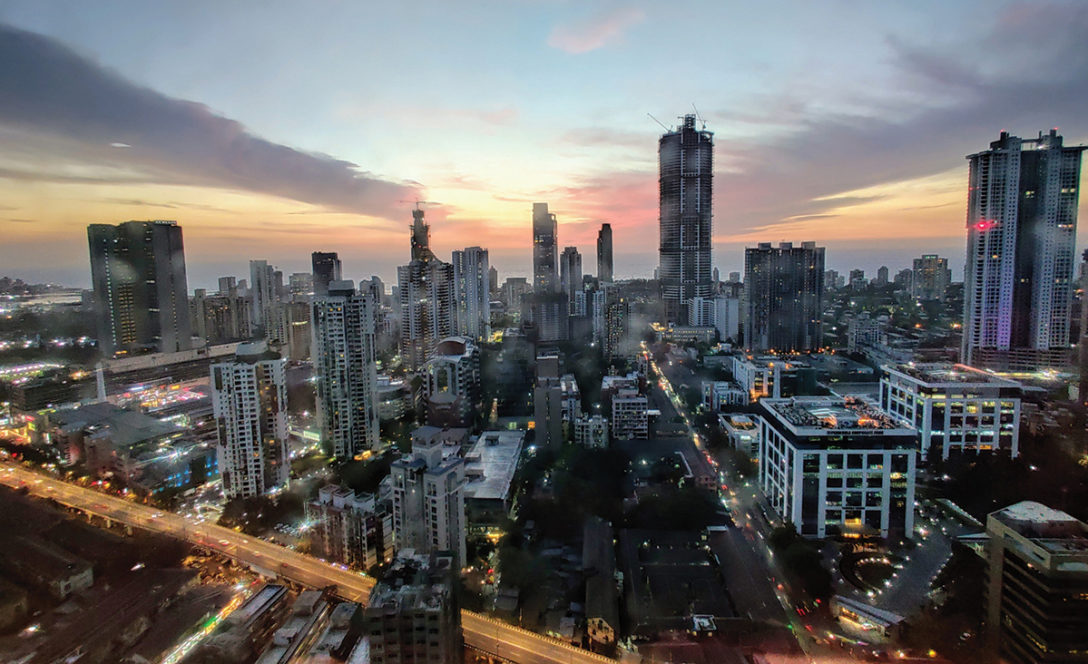 The key fundamentals for investing in real estate in India are its demographics and growth. However, recent government initiatives now mean a huge pipeline of infrastructure projects is supporting the growth of the industrial and logistics sector in particular.

The Indian e-commerce market is set to more than double to $111.4 billion by 2025, from $46.2 billion in 2020, according to the India Brand Equity Foundation. By 2030, it is expected to reach $350 billion. Industrial and logistics space is not just supported by domestic consumption – India is becoming a manufacturing location, as manufacturers look to diversify in the wake of covid-19 and the US-China trade war. CBRE Research found that India was the most popular nation, along with Vietnam, for manufacturers looking to diversify from China.

Key to the development of India’s national logistics networks was the introduction of a national goods and services tax in 2017, which replaced a mix of state levies. This was the spark for a number of overseas investors to allocate significant capital to the sector. The success of India’s logistics and logistics real estate also depends on a suitable transport network – successive governments have been investing in infrastructure projects that are creating new roads, railways and transport hubs.

Canada’s CPP Investments is a global investor in logistics real estate and made its first Asian investment in the sector in 2009. It formed a joint venture with IndoSpace in 2017 to invest in industrial and logistics assets in India. Hari Krishna, managing director, real estate – India, says: “We’ve seen extensive investments across infrastructure in India for several years now.”

Rushabh Desai, chief executive, Asia-Pacific at Allianz Real Estate, which has a $1 billion India logistics joint venture with sector specialist ESR, says the Narendra Modi government’s commitment to economic reforms has boosted delivery of real estate projects. “One of the Modi government’s most significant achievements has been to move forward on transport and connectivity and to deliver infrastructure projects. Previously, delivery of these projects was often delayed, which made investment planning and development planning difficult.”

The nation is not short of roads – its 3.5 million miles of roads are second only to the US; however, less than 2 percent of this is national highways, which carry 40 percent of road traffic.

A country in transition

India’s National Infrastructure Pipeline (NIP) is a program to invest more than $1.4 trillion into infrastructure projects by 2024-25, with the central government, state governments and the private sector to share the capital expenditure. Approximately one-third of this spending will be on roads and railways.

“India’s logistics sector continues to evolve, with an increased focus on automation and modern facilities”

The National Highway Development Plan for the development of 34,000 miles was approved in the early 2000s and is substantially complete. The second leg of development, Bharatmala Pariyojana, has been launched to develop 15,000 miles of roads, with a focus on port-connectivity, economic corridors, expressways and connectivity to multi-modal logistics parks.

The Modi government also introduced the National Industrial Development Corridor Program in 2016, which aims to develop new industrial smart cities and create 11 industrial corridors across the country, with 30 projects to be developed in four phases.

India is seeking to diversify how its goods are transported, away from roads. At present, roads account for 64 percent of the tonnage of freight traffic. However, the National Rail Plan 2030 envisages rail freight accounting for 45 percent of freight by 2030 and the Sagarmala initiative seeks to increase the freight moved on waterways to 12 percent by 2025, from 5 percent currently. The National Rail Plan will see the redevelopment of 90 railway stations into major transit hubs and the development of seven high-speed rail corridors. 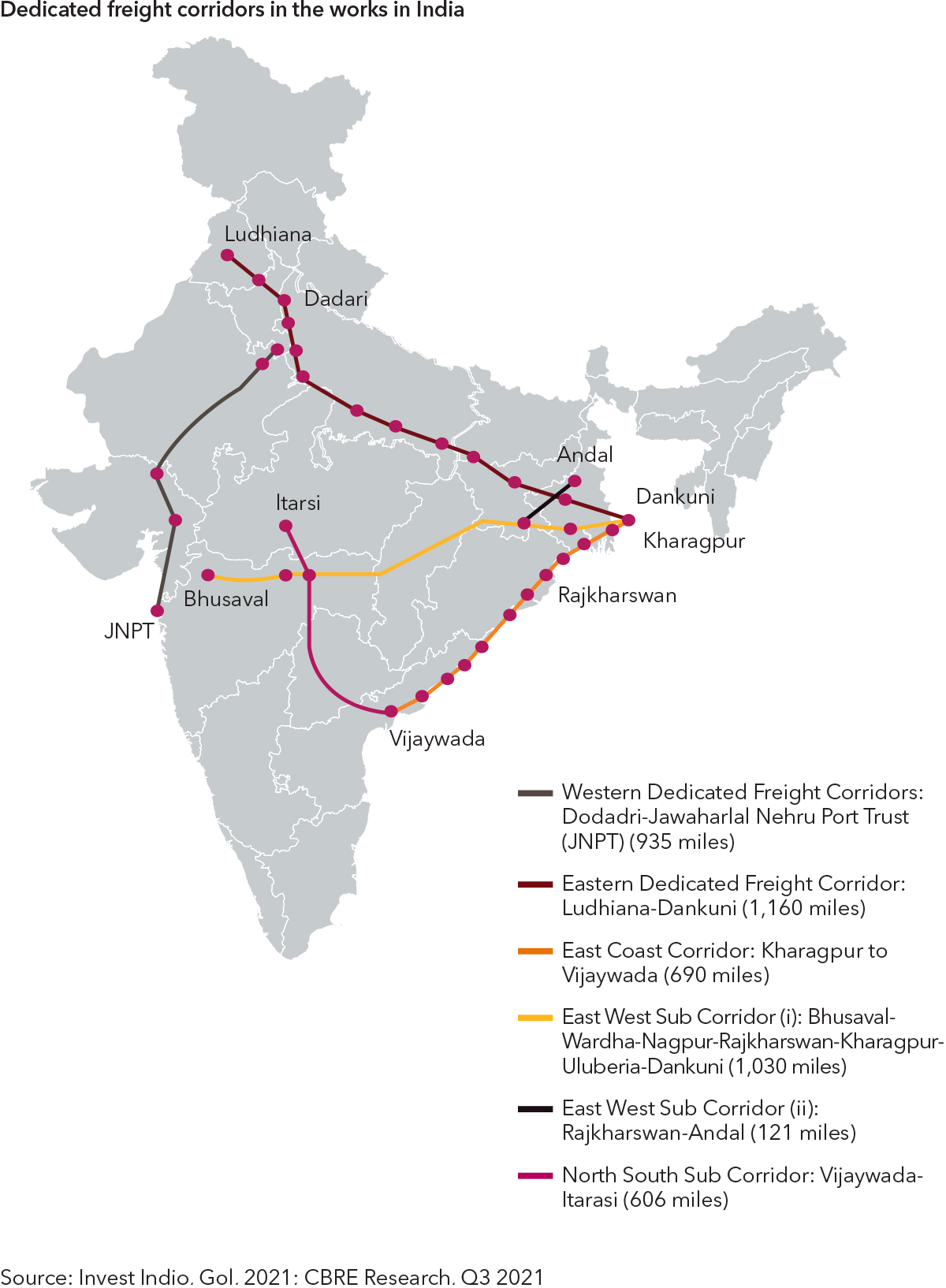 Anshuman Magazine, chairman and CEO – India, Southeast Asia, Middle East and Africa, CBRE, says: “The focus of these strategic initiatives is to ensure diversification of industrial growth across the country by creating self-sustaining integrated industrial and economic nodes along these corridors. These nodes, once developed, would act as catalysts for industrial growth.”

Delivery of road and rail projects is crucial for logistics investors, as warehousing needs to be near transport hubs and, ideally, to major centers of population. CPP Investments’ Krishna says: “In terms of logistics real estate, we invest in locations that already have strong existing infrastructure, with plans to further develop the infrastructure to meet future demands.”

Continued investment in infrastructure will benefit the industrial and logistics sector for years to come, says CBRE’s Magazine. “Investments towards improving the physical infrastructure like roads, ports, utilities and other vital elements could unlock tremendous value for the overall commercial real estate, with logistics being no different.

“The Indian infrastructure and logistics sector has been on a steady growth trajectory, expanding across cities from urban to suburban areas, and Tier 1 to Tier 2 cities in India. A robust infrastructure will help enhance last-mile connectivity and thereby build a resilient and reliable supply chain.”

The entry of substantial foreign capital into the sector after 2017 put pressure on land prices, which – along with the impact of the covid-19 pandemic – slowed the growth of the industrial and logistics sector.

However, Desai says: “A lot of investors moved into the India logistics space after the introduction of GST, which pushed land prices up. However, as India emerges from covid, demand driven by manufacturing and domestic consumption, supported by new infrastructure, is making the sector look more attractive.