GI Partners made the acquisition through TechCore, a $1 billion core real estate separate account that the firm manages on behalf of the California Public Employees’ Retirement System (CalPERS). TechCore, which GI Partners and CalPERS formed in early 2012 to purchase technology-focused properties, has acquired more than 1.7 million square feet of data center and office buildings throughout the US to date.

Terms of the One Wilshire transaction were not disclosed, but data provider Real Capital Analytics noted that the property traded for approximately $437.3 million, or $672 per square foot – one of the highest prices ever paid for a data center. Hines REIT previously paid $288 million for One Wilshire in 2007, when it acquired the asset from The Carlyle Group.

One Wilshire is a 30-story building encompassing 663,000 square feet of data center, office, storage and retail space. The facility, which is 93 percent leased to tenants such as Verizon Communications, CRG West, Quest Communications, CoreSite, Crowell Weedon and Musick Peeler, provides connections to more than 300 domestic and international voice and data services companies.

“One Wilshire is one of the pre-eminent West Coast network facilities,” said Michael Wong, vice president of GI Partners, in a statement.  The property fits well with TechCore’s strategy of acquiring high-quality, technology-advantaged properties leased to market-leading tenants.”

Kevin Shannon, vice chairman at CBRE’s investment properties division, called One Wilshire one of the top three data centers in the world. “The pricing reflects the ability of the asset to achieve higher market rents,” said Shannon, who represented GI Partners in the deal. “It has a unique position within the market and unique connectivity.” The current low-interest rate environment also has helped to compress pricing for all data centers, including One Wilshire, he noted.

In addition to One Wilshire, GI Partners also purchased 2200, 2222 and 2230 East Imperial Highway in El Segundo, California from Hines REIT. That complex, which consists of three buildings totaling 550,579 square feet, was sold to GI Partners along with One Wilshire for a total of $550 million. 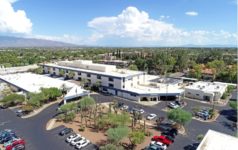