Changing patterns in food production and distribution could lead to a new range of alternative uses for warehousing as the demand for food security and reduced “food miles” are set to drive food production closer to the consumer.

At present, a significant part (around 9 percent) of logistics real estate is used for the storage and distribution of food and this is increasing because of new demand for cold storage warehousing, due to increasing use of grocery delivery services. However, consumers are becoming more concerned about the quality of foodstuffs and also about the environmental impact of what they eat, while many governments are preoccupied with food security.

Peter Bretveld, senior portfolio manager, real estate at Dutch investment manager Kempen Capital Management, says: “The pandemic demonstrated certain weaknesses in the food supply chain. In the early stages especially, countries struggled in getting supplies of good-quality food, particularly in developing countries. At the same time, we see many consumers who are concerned about the resources used in transporting food across the world.”

Urban farming relies on using controlled environments, hydroponics and LED lighting to grow plants without soil and without pesticides in an urban environment, in order to be close to the consumer and eliminate the cost and emissions of transport. In order to make the best use of land, urban farms try to make as much use as possible of ceiling heights with several layers of food production, hence vertical farming.

“Hydroponic farmed products can be pesticide free, have no air miles, use less water and don’t exhaust soil nutrients”

Some operations also use multiple floors of a building. For example, Jones Food Company, which operates the largest vertical farm in Europe in Lincolnshire, UK, fits 17 layers into a 12-meter floor to ceiling height. The Yes Health iFarm on the outskirts of Taipei, Taiwan, occupies 14 stories.

A host of start-ups have been created in the US. The Netherlands, already a large producer of greenhouse crops, is a leader in vertical farming in Europe, with a number of major food production companies investing in the sector. In Asia Japan, Singapore and Australia have seen vertical farming launches.

Where the money is

While most things can technically be grown in a vertical farm, it is most suited to high value, perishable crops, such as greens, salad leaves and herbs or soft fruit. A key advantage is that the artificial environment means there are no seasons; growing continues 24/7 every day of the year.

The sector has seen nearly $2 billion of investment since 2014 but remains tiny and thus far unprofitable. Vertical farms have substantial power requirements and are located on land that is vastly more expensive than agricultural land.

However, the forces that sparked so many start-ups remain in place. Bretveld says: “If you cut out multiple links in the food supply chain, eliminating storage and transport costs, it saves you so much that you can afford to pay a higher rent for space for urban farming. This method also involves less waste which is another cost and one which is likely to increase in crowded cities.”

“Urban farming is one of the trends we are exploring, and I would be surprised if in 10 years, we’re not allocating a small percentage of our warehouse space to urban farming”

In 2019, Ocado, a UK food delivery service which delivers food for Marks & Spencer, announced that it was investing £17 million ($23 million; €19 million at today’s exchange rate) in vertical farms located next to its distribution centers. The company says it aims to deliver fresh produce to customers within an hour of being harvested. Logistics real estate developers are beginning to consider vertical farming as a future tenant for their space. The effect is likely to be marginal for some time, whether it is reflected in new demand for vertical farm space or reduced demand for food warehousing.

Bretveld suggests: “From an investment point of view you might look at logistics portfolios and see where there is exposure to food networks which might change in the future and also at where there is the opportunity to use buildings or sites for vertical farming.”

The demands of vertical farming companies themselves are also changing. European logistics investment manager Oxenwood is looking for a UK site on behalf of a US hydroponics company.

Asset manager Peter Day says: “We are only at an embryonic stage of seeing large specialist hydroponics firms taking modern logistics-style facilities for mass growing, mainly because of the enormous set-up costs. These producers will need long contracts with supermarkets or other large customers, which are hard to secure without the infrastructure in place already.

“However, we are under little doubt that this will become a major new trend. Covid and Brexit have brought the UK’s food security into sharp focus and this is an attractive solution. Although ‘warehouse grown’ may initially feel at odds with consumer preferences for ‘natural’ produce, hydroponic farmed products can be pesticide free, have no air miles, use less water and don’t exhaust soil nutrients.”

Despite the old image of logistics ‘sheds’ being a rather basic form of real estate, the pace of innovation is more rapid than in many sectors, as sophisticated and cost-conscious logistics tenants increasingly turn to automation and their landlords need to be equally tech-savvy. Stuart Gibson, co-founder and co-chief executive of Asia logistics real estate specialist ESR, notes that his firm set up the ESR Future Solutions Group to look at technological changes and the latest trends in customers’ operations, and to determine how these will impact the design and operations of existing and future warehouses.

He says: “Urban farming is one of the trends we are exploring and I would be surprised if in 10 years, we’re not allocating a small percentage of our warehouse space to urban farming. I can definitely see this happening in densely populated and wealthy cities such as Tokyo, Seoul and Singapore, all cities where there is already government support for such farming initiatives, and probably in Australia because sustainability is important there.

“I think there’ll be a growing trend of consumers who want and are quite happy to pay for food produced in local urban farms and we look forward to having such farms in our warehouses.”

With their large floorplates, relatively lower land costs and proximity to existing distribution networks, logistics sites provide the most obvious spaces for urban farming facilities. However, Bretveld notes other real estate types could also be adapted in the future.

“It is not just logistics space which could be used for urban farming,” he says. “Car parking could be adapted and much of it may become redundant as we turn to shared electric vehicles. Many markets are oversupplied with retail space, that also could be used for urban farming. Landlords who cannot lease the upper floors of malls may be able to use it to grow produce for F&B outlets within the mall, eliminating substantial cost and waste.” 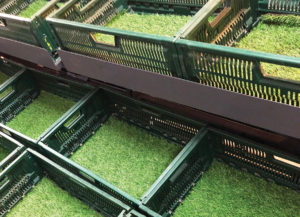 The covid-19 pandemic disrupted logistics networks all over the world and in many countries led to empty shelves, in the short term at least. This has amplified existing concerns in a number of nations, particularly those which rely on imports, about food security and is driving investment in vertical farming.

Singapore is looking to boost food security by producing more of its own and by holding more food supplies, as a buffer in case of events that interrupt supply chains. Holding more food creates more demand for cold storage centers, while the desire to grow more food has led to Singapore championing agrotechnology and vertical farming.

In the future, a greater proportion of Singapore’s industrial space could be devoted to huge indoor hydroponics farms; the city plans to produce 30 percent of its own food by 2030, up from 10 percent today. In August, Singapore sovereign fund Temasek formed a joint venture with German group Bayer to develop breakthroughs in vertical farming.

Alan Cheong, head of Singapore research at Savills, says: “Singapore’s 30 by 30 food production target is the main driver for this industry to grow. By 2030, Singapore aims to be producing 30 percent of its nutritional intake domestically.” As part of this growth, Singapore plans to increase the amount of leafy vegetables it produces from just over 5,000 tons in 2018 to more than 25,000 tons by 2030.

Meanwhile, the United Arab Emirates, which imports 80 percent of its food and is constrained by a hot, dry climate, is investing in vertical farming in order to boost resilience. Last year, the Abu Dhabi Investment Office, a central government hub supporting businesses, invested in seven ‘agtech’ companies, including US firm Aerofarms, as part of its 2 billion dirham ($545 million; €448 million) agricultural technology incentive. These initiatives are also designed to help the UAE save water, something which is also a factor even in established agricultural regions, such as California in the US.