It is a case of going from headwind to tailwind when it comes to the forces impacting compensation in private real estate these days. Between 2019, when the first strains of covid-19 were detected in China, and today, as working amid a pandemic normalizes around the world, pay in the industry has boomeranged.

As market practitioners repopulate offices and travel bans ease, capital deployment and raising volumes have returned to, or surpassed, pre-pandemic levels. According to broker CBRE’s data, global commercial real estate investment soared to $1.3 trillion in 2021, 55 percent more than 2020’s total, which was 30 percent lower than in 2019. As per PERE’s private fundraising research, the $175.73 billion raised for closed-end funds in 2021 was almost 14 percent higher than in 2020. That year’s total was 17 percent down on the amount raised in 2019.

As a result of this bounce, managers have looked to ramp up headcounts to take advantage of the deals stemming from the pandemic. Consequently, the general malaise in individual pay growth in 2020, with instances of no bonuses paid, turned into a remuneration environment supercharged by firms competing for talent. Ghada Sousou, co-founder of private real assets executive search firm Sousou Partners, says of the period: “Firms were populating. It was all about getting people through the door.”

The impact of that populating on compensation is one of the key findings from this year’s compensation study, published by PERE and Sousou Partners. Sousou believes the worst is over in terms of the pandemic’s impact on salary and bonuses, now that business has largely resumed to pre-crisis levels. “I think that’s played out and is finished,” she says. By her reckoning, the current challenge for the sector is momentum the other way. She points to notable wage inflation among private equity and investment management real estate professionals, the two main cohorts that customarily comprise the data for the survey. 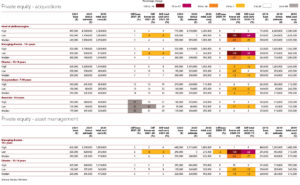 This comes against a macroeconomic backdrop increasingly colored by predictions of high inflation. Financial research provider IHS Markit forecasts uncharacteristically high global inflation of 5 percent in 2022. In the US, private real estate’s biggest market, inflation could reach almost 8 percent, Labor Department data shows, the highest in 40 years. Sousou says the impact of global inflation will become more apparent next year as compensation figures typically lag by one year. She predicts already soaring wages, notably among junior positions in the industry, will compound. “Of course, another pandemic outbreak would reset things,” she says. “But assuming there isn’t such a scare again, now the issue is inflation. That impact is yet to come.”

That assessment is likely to characterize this year’s pay levels. Going over the main themes behind 2021’s numbers, however, Sousou says there are four main areas to consider.

Wage inflation among junior ranks was “the biggest, most blatant thing that stood out.” Sousou says that after a widely executed and publicized leap in associate wages at investment banks, private equity and investment management firms were compelled to follow suit.

“It’s the most productive yet cheapest level, and it’s the biggest pool,” she adds. However, Sousou also believes the junior talent pool is nonetheless receding as careers in financial services lose their appeal relative to the widening array of alternative professions available for talented graduates. This diminishing pool means “there’s a fight for talent and the supply is thinning year after year.” As a result, junior executives are being offered significantly more money to attract them.

Examples of the impact of this can be found in the numbers. For instance, the year-on-year increase in median total compensation for private equity acquisitions associates in 2021 was 25 percent; for their investment management counterparts it was 16 percent. The low ends of the ranges for associates were notably higher too, the greatest rise coming for private equity associate bonuses, which were at least 50 percent higher in 2021 than in 2020.

Cameron Spry, senior partner and co-chief investment officer at London-based manager Tristan Capital Partners, has seen wage inflation among junior positions. He attributes other factors besides the actions of investment banks for this, certainly in Europe. “There’s been a shift at the junior end of compensation, definitely. It isn’t just the investment banking issue, but also covid and Brexit. Those things disrupted the number of young European people wanting to live and work in London, the city which was the mainstay location in the industry.”

Sousou believes that in time, competition for the best talent should trickle up the seniority spectrum, too. She says current market dynamics will drive competition for the best performing seniors and that will, in turn, precipitate notable pay hikes. “Senior compensation hasn’t reacted as quickly as junior, but it will,” she says. Furthermore, the covid impact on senior remuneration in private real estate was short-lived. Following a year characterized by frozen base pay and lower – and sometimes no – bonuses for senior executives in the sector, most compensation practices have picked up from where they left off in 2019.

For instance, the median total pay for private equity real estate acquisition platform or region heads in 2021 was $2.15 million, marginally up on the $2.02 million received in 2019. The story was the same for equivalent seniors at investment management firms, who received a median average of $1.18 million in 2021, versus $1.17 million in 2019. Sousou says the bonus blip of 2019 should be all but gone going forward. “If you see one, it’s likely because of the firm’s weighting to still-problematic sectors.”

Rob Wilkinson, chief executive officer at AEW Europe, says that compensation at senior levels has returned to pre-covid levels. At his firm, a strong 2021 even saw higher than market-average rises and, notwithstanding extreme adverse market conditions, he expects the same again this year. “2020 was down for us overall on total compensation, though not by a huge percentage. Last year was up, and the expectation is it will be up again this year.”

3. Not about the gender pay gap

It might surprise some, but Sousou Partners’ research demonstrates women in private real estate are not generally being paid less than their male counterparts for similar work. In fact, in some cases, the fight for diversified talent has meant the opposite can be true, particularly at the senior end of a hierarchy. Moreover, Sousou says the sector’s gender challenge stems more from a stark mismatch in opportunity between men and women, both in terms of promotions and workflow opportunities. Of the research’s 987 data points, 245, almost 25 percent, related to women. The opportunities for female professionals thin out as the roles become more senior.

“When we called mid-tier and senior women, we found the issue was not about equal pay, but opportunity and career progression. As hard as many organizations try, it remains very difficult for women to reach the top,” Sousou says.

She says the instructions her company received in 2020 were to prioritize team growth, defaulting diversification to a secondary consideration. “You have to go out of your way to hire women for positions because there are fewer of them. It takes longer and more effort,” she adds. It was often an effort groups were not willing to make if they risked missing out on potentially cycle-defining opportunities. That much can be read in Sousou Partners’ data, where just 15 percent of hires in 2020 were women, compared to 33 percent in 2019, rebounding to 37 percent last year.

This backdrop was coupled with little movement at the male-heavy tops of organizations and performances still largely measured against hard revenue numbers. Even when “women often bring so much more to the table besides commercial factors,” this has meant high-earning female placements remain thin on the ground. Indeed, the most senior roles accounted for just 14 percent of the women placed by Sousou Partners over the last five years.

According to Claire Trachet, a London-based corporate finance adviser, covid set women back in the quest for compensation parity by as much as a decade. In a commentary published in February, she blamed “social models,” which she said “are factually still today significantly biased against women and minorities.” Sousou agrees with this sentiment. She says perceptions around women being less likely to want to travel or network for businesses for example, create subconscious biases that result in fewer senior female appointments. Such biases, she says, need overturning for female advancement to improve.

However, she does see signs of change. One client has ringfenced capital to compensate female executives in instances of gender pay gaps and another reserves high earning opportunities for women. “We have private equity fund clients who tell us they give women more opportunities to work on ‘upside deals’ so they earn more carry,” she says, adding such initiatives should impact compensation numbers in the future.

Cristina Garcia-Peri, head of corporate development and strategy and a senior partner at Madrid-based manager Azora Group, believes real estate’s first challenge to overcome when striving for gender parity is attracting women to the sector in the first place. “If 5 percent of the top jobs are held by women, how will other women see this as attractive?” she says. Garcia-Peri adds that retention is key to elevating women through the middle ranks into these senior positions. “If you don’t have mechanisms for flexibility in women’s careers, it’s very hard to keep them committed to investing in this profession.”

The main takeaway from the joint report in 2019 was a significant increase in remuneration for those executives responsible for creating and preserving value. Three years later, asset management skills have only become more valuable as the private real estate sector moves into a covid-influenced environment of property updates and conversions, particularly for many forms of offices and retail.

Sousou says certain firms now offer equal monetary incentives for asset management professionals as they do for acquisitions executives. Momentum here was set by some of the biggest managers on the PERE 100 ranking towards the end of the pre-pandemic growth cycle, as high prices meant returns were increasingly boosted by asset management work.

The practice has spread more widely, particularly among private equity real estate businesses, since covid has accelerated demographic and technological themes that have in turn required material asset repositioning work. “The value creation in the life of a deal is increasingly more important,” she says. As such, “there’s going to be less discrepancy between acquisition and asset management pay.”

This, too, is substantiated by the numbers. In 2019, the best paid private equity acquisitions directors received 27 percent more in total compensation than their asset management counterparts. That difference had narrowed to approximately 13 percent in 2021.

“We run an investor-operator model and over the last year we have invested a lot in resourcing the operating side, to get even closer to our occupier clients and meet their needs. Broadly speaking, this trend of specialization is likely to lead to higher remuneration for high quality asset managers.”