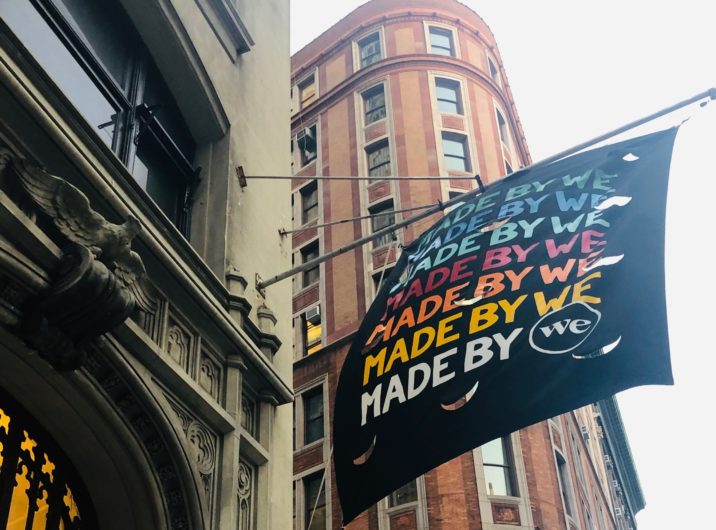 Over the past five years, WeWork and its peers have reshaped workspaces the world over. But now, as office owners face unprecedented challenges from the covid-19 pandemic, the model once billed as a wave of the future is at risk of becoming a thing of the past.

Flexible office providers have emerged as one of the riskier classes of tenants during the pandemic for two reasons: month-to-month membership commitments make their immediate revenue prospects uncertain and their reliance on densifying office space raises questions about their long-term appeal.

“Their core business model is like a bank,” says Daniel Ismail, lead office analyst for the research firm Green Street Advisors. “They borrow long and lend short – except they don’t use money; they use office space. In this environment, that’s proven to be pretty detrimental.”

Despite government-mandated closures in nearly every major market, office assets have continued to deliver returns to institutional investors. First quarter income returns from office properties in the National Council for Real Estate Investment Fiduciaries Property Index were 1.09 percent, virtually unchanged from the 1.06 percent tracked during previous quarter. Further, as of mid-May, office loans had seen the fewest delinquencies of all the property types in the private-label commercial mortgage-backed securities market, according to the data and analytics firm Trepp.

Still, the longer these closures continue, the more tenants are likely to miss rent payments. Ismail says many landlords have shifted their flexible office tenants to cash-based accounting standards, indicating a lack of trust in their creditworthiness. Recent moves by the top providers in the space make that skepticism appear warranted. WeWork has laid off hundreds of staff since the crisis began and seen its bonds trade at 40 cents on the dollar. Knotel, a group that caters only to enterprise tenants, has also downsized and is set to return 20 percent of its portfolio to its landlords. Stock for IWG, the parent company for Regus and Spaces, is down more than 50 percent on the year.

Though a small portion of the overall office landscape, flexible space providers have accounted for roughly a quarter of new leasing activity in recent years, according Green Street. At the end of last year, WeWork controlled 26.4 million square feet of office space in the US, Regus had 18.8 million square feet and a consortium of other firms totaled roughly 25 million square feet, according to the real estate research firm CoStar Group.

Should these tenants fail, many office owners would be unable to recoup their losses. WeWork’s early leases, for example, provide minimal credit protections, as they are signed by shell limited liability companies. If revenues dip too low at a location and rent payments stop, landlords have no recourse to go after the corporation.

While prospective threats to the flexible office model loom large, the worst-case scenario has not yet come to pass. The top firms remain solvent and, although rent breaks have been granted, defaults have not cropped up. WeWork and other operators have kept most of their locations open through the pandemic, albeit with enhanced cleaning standards and restrictions on density.

“WeWork has been a good corporate citizen with their rent with our assets. But how this plays out is a question of duration,” Anthony Breault, senior real estate investor for the Oregon State Treasury, tells PERE. “I’m not concerned about the short term anymore, it’s really June, July, August and further into the future about the viability of the model.”

Even if defaults become rampant among flex office providers, the impact on institutionally owned office properties would be relatively minimal. Despite the fact the co-working sector has had an 18.7 percent compound annual growth rate in the US since 2013, according to CoStar, it makes up 1 percent or more of office space in just seven US markets: San Francisco; New York; Los Angeles; Orange County, California; Austin, Texas, and Seattle.

In the case of WeWork, landlords with heavy exposures to the company were already forced to envision life without it last year after a failed run at a public offering threatened its existence. Not all forecasted doom. SL Green, the top landlord in New York for example, leased 127,000 square feet to the co-working giant at its Two Herald Square property. Last fall, the REIT said if WeWork were to collapse, its sole sub-tenant in the building, Amazon, would simply take over the lease.

In fact, the pandemic could provide some owners with a welcomed opportunity to part ways with flex office tenants and the stresses they bring, Paul Leonard, a managing analyst at CoStar, tells PERE. “In some cases, they’d be willing to get rid of these co-working tenants and replace them with someone else just to get rid of the headache,” he says. “Co-working was a hot thing and it helped fill buildings. If you were 85 percent occupied it got you to 90 percent and that was attractive at the time. But it is a headache because you have to be constantly worried about your tenant being able to re-tenant, almost like a hotel having to get people in there constantly.”

The covid-19 crisis also offers a reset opportunity for flex office providers that spent the past several years adding square footage at breakneck speeds. WeWork is reported to have walked away from three properties in Hong Kong in May, for instance, including 150,000 square feet at Gateway Tower 6 in Harbour City.

Knotel, the third largest flexible office provider in the US after WeWork and Regus, relinquished one-fifth of its locations to “optimize” its portfolio, Amol Sarva, the company’s CEO told PERE in an email: “The locations we shed may not see strong demand post-pandemic, such as buildings with small elevators and poor ventilation. While it’s unfortunate we have to part ways with some, we look forward to strengthening our relationships with existing owners and focusing on safely bringing our customers back to their workspace.”

Julie Whelan, head of occupier research in the Americas for the brokerage CBRE, says workers returning to flex spaces would likely have the same concerns as those returning to traditional offices. Both settings will require layout changes and new protocols, she tells PERE, and suites on the ground level, or with private entrances, will likely be most attractive to virus-wary occupiers.

As unique as the ongoing pandemic has been, Whelan says it has highlighted a long-feared weakness in the co-working-as-a-tenant model. “It is more apparent than ever that flexible office space is best provided in a building in a partnership or management agreement between the landlord and operator,” she says. “Such formats allow both parties to better absorb and weather market movements as a normal course of business.”

One flexible office provider that operates with a management agreement model is UK-based Bold. From each of its clients – the owners of the properties in which it operates – Bold collects a flat management fee, shares a percentage of its revenue and a percentage of its EBITDA, founder Caleb Parker tells PERE: “We weren’t comfortable taking on leases at all our locations because we thought, what happens ‘if,’ and now ‘if’ is happening.”

Should management agreements emerge as the model of choice for flex offices, Peter Merrigan, chief executive of Boston-based Taurus Investment Holdings, says investors would need to be able to underwrite the added uncertainty and potential operational burdens. However, like others, he believes the preference for flexibility that has emerged in recent years will not disappear post-pandemic, but rather emerge in a new form: “There will continue to be demand for that kind of space, but it will have to go through some changes.”