Compiling the PERE 100 ranking requires digging through a wealth of data. Here, we take a closer look at the numbers to highlight salient themes relating to private real estate’s fundraising powerhouses – and reveal which firms made the most noteworthy moves up and down the ranking.

Some reshuffling aside, the top 10 firms in this year’s ranking remained largely the same as last year. Two exceptions were Cerberus and PIMCO, which slipped to 12 and 34, respectively, while top 10 regulars Rockpoint and BentallGreenOak returned to the fold. In fact, Blackstone, Brookfield Asset Management, Starwood Capital Group, GLP and Lone Star Funds have all been top 10 mainstays for at least the past five years.

The top 10 firms together have raised $196.3 billion of discretionary equity over the past five years, or nearly 40 percent of the aggregate $494.5 billion amassed by all 100 managers.

Since the global financial crisis, “there has been a general well-known trend by some of the large investors to ‘do more with fewer,’ which has fueled the fundraising volume of the largest firms,” explains Walter Stackler, managing partner at New York-based capital advisory firm Shelter Rock Capital Group.

This year’s five-year total was higher for 75 out of 100 firms. Top-ranking Blackstone, for example, saw its five-year tally rise from $55.2 billion in 2019 to $64.9 billion this year. Stackler notes there are two key reasons for rising fundraising numbers over the past half-decade: “One: denominators across the board were growing, which led to more allocation to the sector; two: performance across the board was favorable for many of these managers. Existing GP relationships were the prime beneficiary.”

Among the top half of the PERE 100, 37 firms targeted multiple regions. However, the bottom half was the reverse, with about the same number focused on only one region. For Tross, a manager’s geographic diversification is critical in helping mitigate investment risk. While such diversification does not help during global crises like covid-19, it can make a difference with geopolitical events. With Brexit, for example, “if you’re only in the UK, then you’re much more vulnerable than when you’re more spread around the globe,” he says.

The PERE 100 also were diversified in terms of real estate strategies, with only 13 sector specialists on the roster. For Tross, sector diversification also helps to reduce investment risk. “It helps if you are in multiple sectors,” he says. “For instance, if you are a global hotel chain, you are very hard hit by the covid-19 virus, whereas if you had hotels, but also logistics, logistics is still having some solid fundamentals. The more diversified, the more your income stream is secured.” 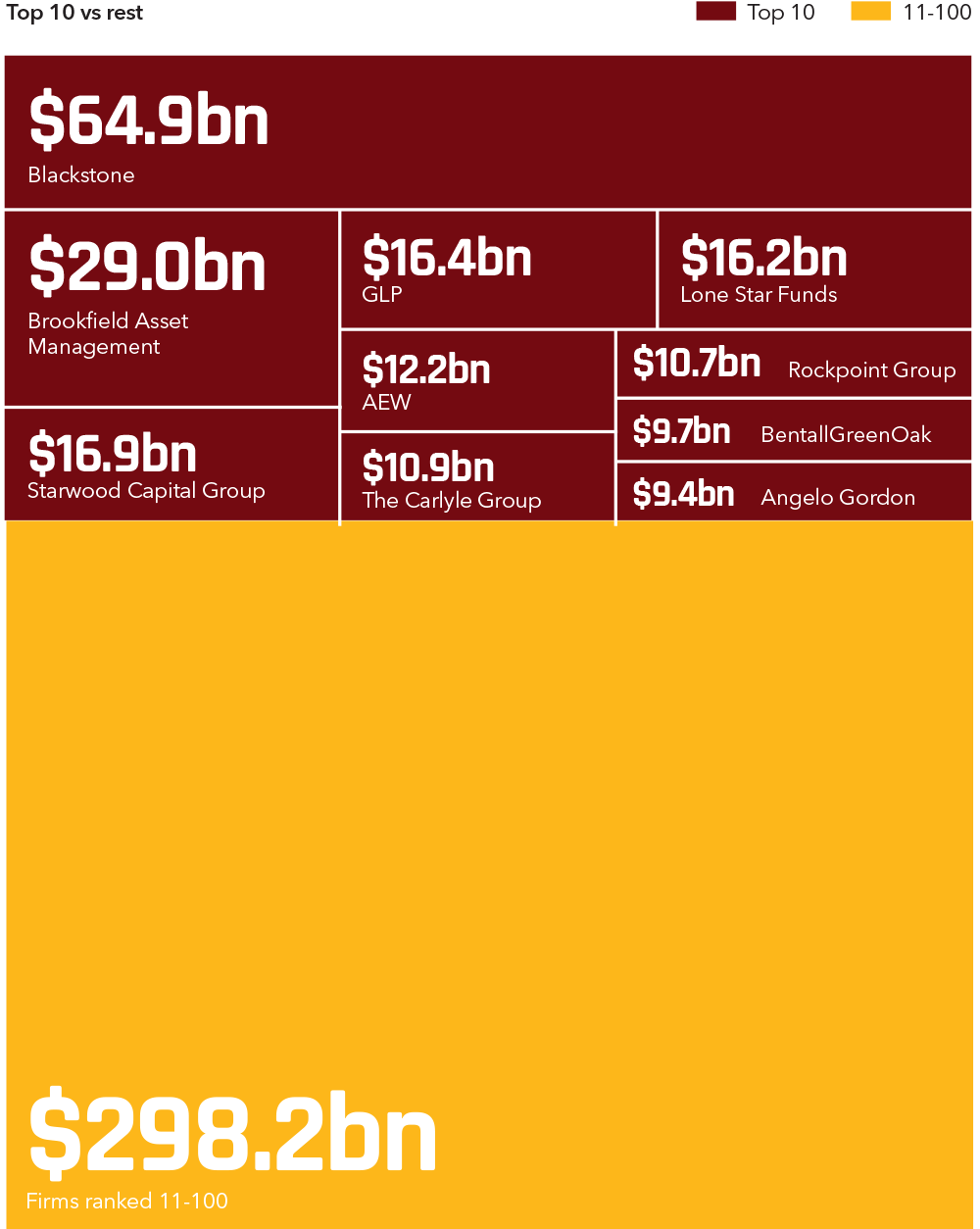 Of the 100 firms, 73 are based in the US and Canada, while 17 are based in Europe and 10 are headquartered in Asia. Citing his firm’s informal tracking of investor capital flows, Stackler notes that typically, two-thirds of the capital for real estate funds has come from North America: “It makes sense that North American managers have corralled more capital, particularly if they are US dollar denominated vehicles with a majority of investments in the region.”

A total of 18 firms debuted in this year’s ranking, with Oak Street Real Estate Capital clinching the highest entry at 20, having raised $6.56 billion of capital over the past five years. Madison International Realty had the second-highest premiere at 29, with $4.95 billion collected during the period.

All 18 leavers ranked in the bottom 50 of the 2019 list, of which the highest-ranking was Fir Tree Partners at 60. The firm, however, fell the furthest among this year’s dropouts, plunging 92 spots to 152. Fir Tree, along with Hammes Partners and Hermes Real Estate, saw its 2020 five-year fundraising tally drop to $0. 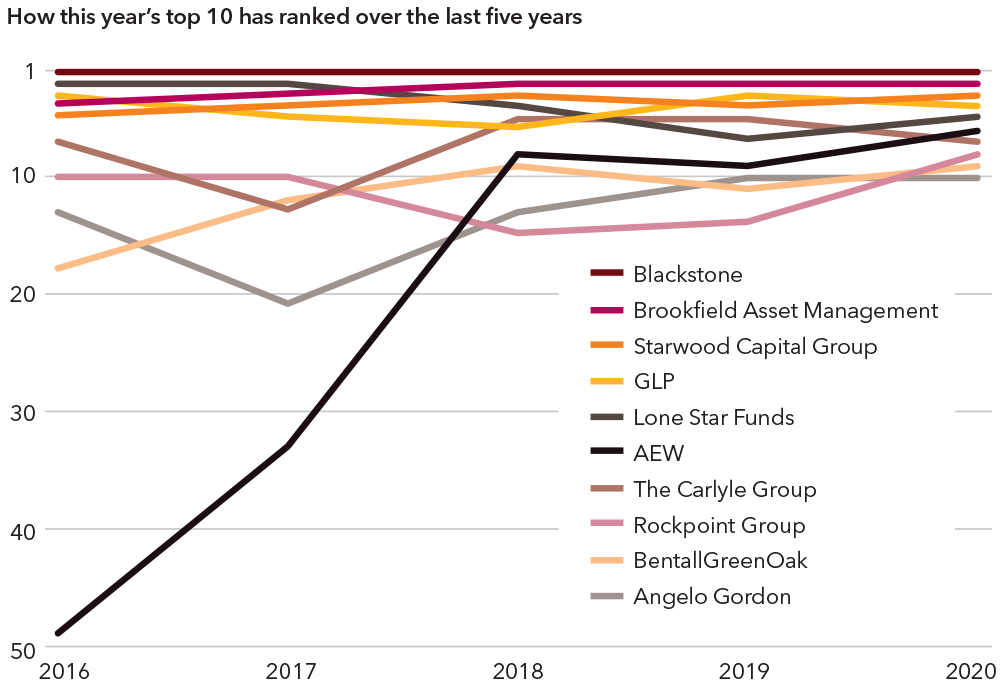 Meyer Bergman was the biggest faller on the PERE 100, plummeting 45 spots from 38 to 83, on the back of a $2 billion reduction in its five-year tally. Kildare Partners tumbled 33 places from 34 to 67, while both PIMCO and Apollo Global Management slid 26 spots, the former from 8 to 34 and the latter from 66 to 92. Northwood Investors declined 25 places from 63 to 88.

While some managers dropped significantly, the top 10 highest risers surged even more. Goodman Group distinguished itself as the top riser, soaring 74 places from 124 to 50, while Pennybacker Capital was the second-highest riser, jumping 52 spots from 120 to 68. Interestingly, only four of the 10 were on the PERE 100 last year: Spear Street, Keppel Capital, KKR and KSL.

The PERE 100 is by and large a group of older, more established firms, with only five managers launched less than a decade ago. Three new entrants this year were founded between 2015 and 2017: Ardian Real Estate, Bain Capital Real Estate and Asana Partners. 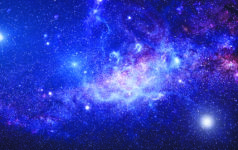 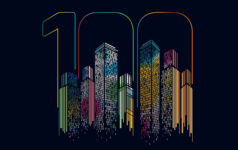 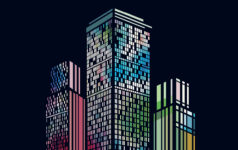