Nothing stands still for long and the rapidly changing regulatory landscape in real estate is a testament to that reality. Environmental and building energy standards have swept across much of the world over the past two years, the trend accelerated by net-zero targets and the race to prevent global temperatures rising more than 2C.

In Europe, the mandatory SFDR and EU Taxonomy took effect in January, with managers required to disclose all sustainability-based data and policies. Each investment needs to pass the six EU Taxonomy objectives to be considered sustainable: climate change mitigation, climate change adaption, sustainable use of water, transition to a circular economy, pollution prevention and protection of biodiversity and ecosystems.

“More clarity is expected on the EU Taxonomy reporting requirements during 2023 and 2024 and organizations should be keeping an eye on this space,” says Shane Caldwell, sustainability lead at Irish real estate firm IPUT. “Other regulatory or mandatory reporting is likely to come in the medium term on topics such as biodiversity loss, with the progression of the Taskforce on Nature-related Financial Disclosures over the past 24 months a signpost for this.”

The TNFD framework is primed for final release in 2023 and is a global, market-led initiative designed to help firms report and act on nature-related risks and opportunities. More than half of the world’s economic output – $44 trillion, according to the TNFD – is highly or moderately dependent on nature, and the rapid decline in global species population over recent decades poses a critical threat to both biodiversity and long-term financial returns.

“The SFDR, EU Taxonomy and other regulations are all becoming increasingly important for our sector,” says Cristina Garcia-Peri, managing partner and head of corporate development and strategy at Azora Group, the Spanish investor. “However equally, if not more important than complying with national regulation, is the need to meet ESG demands imposed on us by investors, to keep our products attractive and competitive.”

Peter Holden, managing director, co-head of private real estate asset management at Partners Group, explains that while the standard is getting higher, the market in many instances is moving ahead of the legislative process. “We pay a lot of attention to legislation, but we pay equally, if not more attention to what the next buyer analysis will be, because we know that sophisticated investors are very discerning of investments when it comes to ESG credentials,” he says.

Other regulations are also appearing across Europe. In January 2022, France released its RE2020 environmental regulation aimed at achieving carbon neutrality by 2050. In late October, the Financial Conduct Authority in the UK also launched the consultation period for the proposed Sustainability Disclosure Requirements, a crucial framework and the next step in the UK government’s aim to support the transition to a net-zero economy.

“We welcome the FCA’s proposals as an ESG regulatory game-changer for UK fund managers and their investors and suggest that the product labels ‘sustainable focus,’ ‘sustainable improvers’ and ‘sustainable impact’ could be attractive to – and adopted by – fund managers and investors elsewhere,” says Melville Rodrigues, head of real estate advisory at services provider Apex Group. “In a real estate context, such labels could be applied to reflect different stages of an asset’s life cycle and will be useful for funds with stranded assets but which are transitioning to ‘green.’”

Beyond Europe, Asia-Pacific countries such as Singapore and Japan are also looking to align themselves with emerging frameworks like the TCFD. In services company JLL’s latest Global Real Estate Transparency Index, Japan joined the top tier of 10 most transparent countries in real estate for the first time. Singapore also pulled ahead of Hong Kong, with both markets on the verge of the ‘Highly Transparent’ tier, and the former aiming to achieve 80 percent green buildings by 2030.

While the US may be playing catchup to Europe, local sustainability initiatives and efforts from the SEC are helping to shift the dial. Just over two years ago, New York City passed one of the country’s most ambitious pieces of decarbonization legislation, Local Law 97, requiring most buildings over 25,000 square feet to meet new energy efficiency and greenhouse gas emissions by 2024, and with even stricter measures coming into force in 2030. The ambition is to slash emissions released by the city’s largest buildings by 40 percent by 2030 and by 80 percent by 2050.

“Some cities and local municipalities have set carbon emission caps, per square foot, and there is a schedule for those caps to decline over time,” says Cope Willis, managing director of sustainability at Greystar Real Estate Partners.

“If you are above those caps, you pay a certain regulatory fine and for the first time we are really seeing some significant financial penalties for companies that aren’t being more proactive about trying to improve their environmental performance and reduce the carbon footprint of their assets.”

In March, the SEC also proposed new governance regulations that would require public companies to report their direct and indirect greenhouse gas emissions, as well as Scope 3 ‘value-chain’ emissions. The proposed rule would require companies with a market cap of $700 million or more to disclose relevant Scope 3 emissions from 2024. Smaller firms with a market cap of $250 million or less would be exempt, while companies that sit between would be required to disclose from 2025.

The SEC was supposed to finalize the expansive new climate disclosure in October 2022, but this looks likely to fall into at least the first quarter of 2023 after the commission received thousands of public comments and suffered several system hiccups.

Republicans have previously opposed mandatory disclosure, saying it would violate First Amendment rights. The Supreme Court’s recent decision against the Environmental Protection Agency could also have implications for the SEC’s climate proposals, according to rating agency Sustainable Fitch.

The Supreme Court ruled that the EPA did not have the authority to regulate and set standards for carbon emissions. In 2015, the EPA also told coal power plants they must either reduce production or subsidize alternative forms of energy but was immediately challenged in court.

These factors may prove a stumbling block to more stringent regulations in the US, but the fact is that while regulations are piecemeal and differ across geographies, pressure from investors is forcing managers to go beyond minimum standards.

To really stand out from the crowd, managers need to take a proactive stance to cut emissions and decarbonize operations. This might mean unpicking Scope 3 emissions or becoming more conscious of potential regulations farther down the road, like carbon taxes. Either way, taking action as soon as possible is clearly the best way that managers can stay ahead of the competition and prepare for the inevitable shift to a low-carbon future. 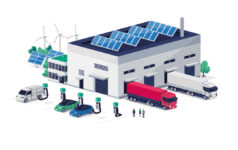