The developing trend toward greater environmental and social policies has driven a number of industries to adapt and improve their environmental impact, as well as the effect their business has on the well-being of staff. The real estate industry is no different and, if anything, it has more of a mountain to climb to reach the goal of net-zero emissions.

Indeed, the built environment is responsible for around 39 percent of all global emissions, according to the World Green Building Council’s Global Status Report 2017. This comes not just from construction using carbon-intensive materials like concrete and steel, but also from operational buildings during their lifetime. Only 11 percent of the emissions from the built environment comes during the construction phase, the balance occurring over the lifetime of the asset.

There are dangers associated with inaction. Of course, if we lose the race to slow global warming, the long-term effects on the planet will be catastrophic, but failure to act also greatly impacts the real estate industry itself. Investors are no longer just looking at the current environmental performance of an asset, but also at the risk of flooding or fire caused by climate change – and what is being done to mitigate that.

“It all starts with data tracking and analysis”

More importantly, investors are asking if the asset can be adapted to fit into a net-zero emissions portfolio. Failure to do so risks offices, sheds and alternative assets alike becoming subject to greater risks in vacancy, devaluation and in some cases even fines from failing to meet new environmental codes.

If a building is not brought up to meet modern sustainability standards, it risks entering ESG obsolescence territory, whereby an asset is no longer viable for either improvement or investment because it cannot meet expected or legislative environmental standards. How real is the ESG obsolescence risk, and is it ever the case that nothing can be done to improve a building’s emissions output? 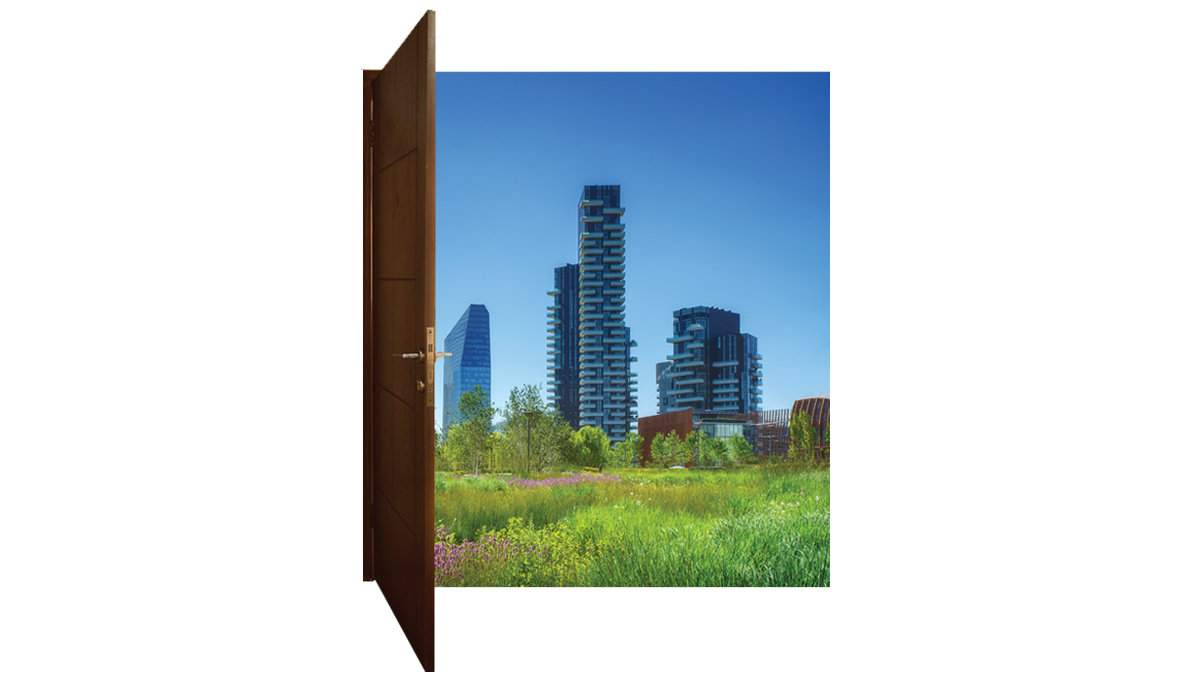 To reach net zero is a long path, but Christina Djambazca, an associate with environmental benchmarking firm GRESB, argues that making a start is not a formidable challenge. “The first step is having a sound plan, and then having the right metrics, targets and data in place to prove that this is actually happening,” she says. The key is to understand where an asset currently is on the route to net zero.”

To do this, gathering the key data to set a benchmark is essential. “It all starts with data tracking and analysis; once we understand an asset’s current performance, we can help drive operational and resource efficiencies, like reductions in energy consumption, water use and waste,” says Helen Gurfel, head of sustainability and innovation at CBRE Investment Management.

Proportion of carbon emissions from the built environment attributed to construction

Those efficiencies start with improving the areas that leak energy. Upgrading insulation has a major effect on energy efficiency at relatively low cost. Replacing lighting with more efficient and longer-lasting LED lighting is another simple step, as advocated by Sophie van Oosterom, global head of real estate at UK manager Schroders. More difficult, but no less effective, is replacing windows and entrances to keep warm air in or bright sunlight out.
Djambazca believes educating tenants on how to use energy the smart way is another key to unlocking more efficiency. These could be as simple as messages to tenants about turning off screens or lowering the thermostat by one degree.

Where measures can get more complex, but still within easy reach, is keeping energy usage down by adding in more control. For example, putting in sensors that monitor movement keeps the electricity usage to a minimum, especially when the building is underoccupied or less busy, and regional thermostats can keep an unleased floor warmer or cooler than those that are occupied.

“Another area of focus,” says Gurfel, “is to replace fossil-fuel-based equipment, such as boilers that heat the building, with electrical equipment like heat pumps.”

Taking these measures cannot be done unilaterally, however. As with collecting data, the tenant has to be involved with taking these steps, either because retrofitting puts functions and areas of the building out of action for a while, or because the measures may be seen as intrusive on their operations. As Gurfel observes, “tenants have also started to set ESG and net-zero mandates.” So, working with them is getting easier: “We try to partner with tenants and work towards our collective goals.”

In addition, as refitting major equipment after 10-20 years is a part of every building’s lifecycle, Gurfel believes this is the perfect time to work with tenants to replace inefficient or failing kit with more efficient and green technology.

Related to the use of building in more efficient equipment and sensors is delivering all of the data collected by these systems into a central data management suite. Until recently, a great number of properties have relied on building managers working with separate data feeds to manage heat, air and water, and then adjusting each piece of equipment independently.

Modern data systems now collate that information into a central control system that can advise on, or even automatically control, areas of the building across all the different energy usages. This complex blending of data reduces the inefficiencies caused by pieces of equipment working against one another until adjusted, thereby lowering emissions. Perhaps most obviously, if the target is net zero, then the energy coming into the building should not be from carbon-emitting or ‘brown energy’ providers.

There are options for almost every landlord as to how to source that power. As Gurfel says: “The switch to renewable energy is essential to decarbonization. Whether we install on-site renewable energy like solar panels or procure off-site green energy, the adoption of renewable energy will help accelerate the transition to a low-carbon grid and economy.”
Gurfel cites four logistics assets within CBRE IM’s portfolio that have recently joined up with green energy provider Office Power. In this deal the power cells are installed on leased roof space on the assets, and power not just the buildings, but also the local community at a discount.

This step cannot be independent of changing the equipment, however. “With electrifying fossil-fuel-based equipment, ideally this can be done in the same timeframe as the decarbonization of the local grid to maximize carbon reduction,” Gurfel adds.

What is not a solution to the net-zero problem is to think that scrapping the existing building is a carbon-neutral move. With 11 percent of the carbon emissions built into an asset, replacing it rather than renovating it simply adds more carbon without necessarily avoiding the carbon emissions created in the running of an asset. A push to replace should therefore be avoided, says Schroders’ van Oosterom, a point GRESB’s Djambazca agrees with. “From a whole lifecycle perspective, trying to sustain as much of the structure as possible and then improving whatever you can should be the preferred way,” says Djambazca.

A desire to replace rather than renovate may come from landlords reasoning that an asset is either too old or needs too much work to solve its issues. This is a view Djambazca takes exception to. “When trying to decarbonize, taking action as soon as possible is the most important thing, and while delayed action will result in increased risk for the portfolio, no action at all will only accelerate that,” she says.

Local as well as global benefits

Preparing for a net-zero future is a complex task, but Djambazca sums it up as “all about understanding your portfolio, knowing where the low-hanging fruit is and making sure you act on them as soon as possible then tracking the improvements as you go.”

No one argues that the process is going to be cheap, but there are more downsides to not acting than to taking the plunge. As Djambazca says: “Selling off an asset because it is very carbon intensive does not in any way contribute to the decarbonization of the real economy – you’re just going to sell it at a discount, or you will continue renting it at a discount.”

In fact, there is evidence to suggest that renovating a building to meet more stringent ESG standards, and in particular a net-zero future, is attracting greater rental income, alongside delivering a building that is both cheaper to operate and likely to attract a higher return in the long run. All while helping save the planet.

How to measure progress

Data is the key to unlocking a net-zero future, but ongoing data collection is only as good as the benchmark it is collected against

Organizations like GRESB have sprung up to help provide a benchmark, collecting information about portfolios globally and measuring the ESG risks against their peers and environmental, social and governance metrics.

The GRESB benchmark sits alongside the EU’s Carbon Risk Real Estate Monitor (CRREM), which can provide an environmental risk assessment of individual or multiple assets based on a broad dataset from across Europe. CBRE IM is a major user, according to Helen Gurfel. Gradually, CRREM and other organizations are expanding to meet demand in other jurisdictions such as the US and Asia.

Benchmarking an asset is only useful as a starting point, however. Regular monitoring of environmental assets and changes is needed to measure progress on net zero. While collecting client invoices can give some idea of the progress of a portfolio toward greater efficiency, it is far from ideal. The current highest standard is to collect data from sensors in lighting, heating and air systems and feed that information through a building management system.

“One of the challenges, though, is getting that data. In some cases, where landlords are not directly responsible for the day-to-day building management, particularly in the industrial sector, landlords have no insight into their tenants’ energy consumption,” says GRESB’s Christina Djambazca.

Centralized data collection allows the software to assess and predict events as diverse as empty office space over holiday periods, sudden rises or drops in outside air temperature, or even when equipment fails. This allows building management to deliver efficient solutions like automating thermostats, switching off lighting or calling engineers to fix equipment.

Data also shows when each measure has been effective, guiding owners to invest in even more efficient equipment or processes. All of which leads even further down the path to a net-zero future.