VBI Real Estate has been on hiring spree as of late, bringing on four new senior hires in the last two months.

Notably, the São Paulo-based private equity real estate firm has recruited its first head of international business development and its sole US-based employee, Eoin Slavin. Slavin, who is based in Greenwich, Connecticut, will meet with prospective investors in the US as well as help to support the firm’s Brazil-based capital raising team, among other business development functions.

Before VBI, Slavin was a founding partner of Landis Forest City, a joint venture between Rio de Janeiro-based retail developer Landis and Cleveland, Ohio’s Forest City Enterprises to develop regional shopping centers in Brazil. At Landis, his responsibilities included devising and executing the partnership’s investment strategies, identifying and acquiring new projects, as well as structuring the equity and debt for those projects.

Avelino Palma also has joined as head of local capital markets for the firm, which has seen increased demand in real estate from family offices, high-net-worth individuals and wealth managers amid the country’s steep interest rate cuts. In addition to capital raising, he also will be charged with obtaining financing in the local markets for the firm’s investments.

Palma previously was part of the legal team focusing on the structuring and distribution mortgage-backed securities at São Paulo-based fund manager Rio Bravo Investimentos and a director at Cibrasec, a securitization company backed by a number of Brazil’s top-tier banks. Most recently, he was founder of CRE, a real estate financial advisory firm.

Andre Albuquerque Cardinali, meanwhile, has come on board as head of industrial development and leasing. In his new post, he will lead the firm’s build-to-suit developments and act as the business development manager for VBI’s industrial sector business line.

“There’s a lot of people but not a lot of foreign investor activity in the [Brazilian real estate] industry,” said founding partner Ken Wainer, commenting on the firm’s recent crop of senior hires. “Winners hire good people in the down market to be ready when everything falls into place.”

Founded in 2006 by Wainer, Rodrigo Abbud and Rodrigo Sarti, VBI invests in the retail, office, residential and industrial sectors in Brazil. The firm, which has 38 employees, raised $183.8 million for its first fund, Brazil Real Estate Opportunities Fund I, in 2008 and $500 million for its second fund, BREOF II, in 2012, among other investment products, according to the firm’s website. According to PERE data, its investors have included the Oregon Public Employees’ Retirement System, West Midlands Pension Fund and Merseyside Pension Fund. 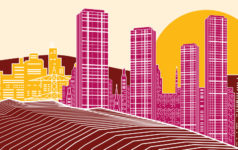