The Abu Dhabi real estate market is not immune to the global economic downturn despite “talk on the street” arguing the contrary, Shuaa Capital has warned.

In its outlook for the real estate market in 2009, the Dubai-based bank, which operates private equity and real estate funds, said Abu Dhabi would be impacted by falling property prices and a slowing population growth.

“Talk on the street makes it sound as if the global financial crisis only reached the shores of Dubai and somehow missed Abu Dhabi,” Shuaa said in its report. “The reality is very different. Yes, Abu Dhabi is more resilient than Dubai but, contrary to popular belief, it is not immune.”

Dubai has been severely impacted by the credit crisis, after real estate values doubled in the year to 2008. However, the collapse of Lehman Brothers heralded the start of the downturn in the United Arab Emirates, with big name developers such as Emaar and Damac Holdings announcing job cuts in November.

Dubai is now expected to see a 5 percent drop in population, adding further pressure to real estate values. Residential occupancy levels in Dubai are now are expected to fall to 80 percent over the next two years, while the office sector will be affected by a shrinking population, declining local demand and lower economic activity.

“Hiring freeze and lay-off are probably the two most popular terms in Dubai right now; for many, the two terms are brand new additions to their business vocabulary. For most, they replaced optimism with low confidence. Expansion is on the backburner, for now,” the report added.

Abu Dhabi would also be hit by the downturn, the report continued, with economic and population growth expected to slow significantly in the first half of 2009. However, the report, said fundamentals remained strong for the country’s real estate market. 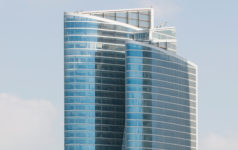