PERE
Home Opinion The good, the bad and the ugly of an oncoming recession
Return to search
Opinion

Richard Barkham, global chief economist at real estate services firm CBRE, set the tone for the PERE America Summit 2022 in New York when he opened the conference with an economic presentation that included a prediction for a recession in 2023. Although he believed the economic slowdown would likely be moderate, Barkham added the caveat that we continue to live in unpredictable times: “There are a lot of things that could happen that we can’t foresee.”

As approximately 200 delegates heard over the two-day event, a recession has mixed implications for private real estate. Below are four takeaways from the conference, in descending order of best to worst potential impact on the industry.

Dislocation is a limited-time opportunity: Multiple speakers at PERE America believed the anticipated recession could offer investment opportunities that are hard to come by. “We might be seeing a once-in-a-generation pricing opportunity,” said Barkham, noting that the industry only had six months to take advantage of bargain pricing during the global financial crisis. “Investors need to be thinking about timing because the window will be narrow.” During a Day 1 panel on global market opportunities, Daniel McHugh, Aviva Investors’ chief investment officer of real assets, similarly stressed the importance of timing. He called the current market dislocation “one of those opportunities that comes around every decade.” McHugh believed investors would have a window of a few years to access quality stock with less competition.

The bid-ask spread is starting to narrow: There are signs the bid-ask spread is starting to narrow. “The cost of capital has moved dramatically,” said Paul Gillen, managing director at capital advisory firm Hodges Ward Elliot, during a Day 2 session on commercial real estate pricing. “Pricing is down. It starts at 10 percent to 15 percent for core product to much more than that down the risk curve.” With the US mid-term election results now in and the Federal Reserve expected to announce a smaller rate hike at its meeting next month, Brent Maier, real estate valuation partner at advisory and tax firm Baker Tilly, anticipates more optimistic pricing in 2023. “Everyone likes to underwrite certainty,” he said.

The denominator effect is worrying managers: As global stock markets have declined this year and left many institutional investors overallocated to real estate, the denominator effect is becoming an increasing concern for managers. Although real estate values in the equities markets have taken their hits, those in the private markets have yet to do the same. With an overallocation to real estate, investors are now unable to commit capital to the asset class, Chris Merrill, chairman and chief executive of Harrison Street, noted during the opening keynote panel. “This will lead to challenges for firms that don’t have a strong balance sheet or a unique investment strategy because going after that capital is so difficult,” he said.

The debt situation is getting more dire: While the best sponsors have access to debt, for other borrowers, pricing is often not lining up with the debt capital available. During a panel on fund manager strategies, Roger Morales, head of commercial real estate acquisitions at KKR, estimated approximately 40 percent of deals coming to market do not price. In a fireside chat on Day 1 of the conference, Bob Morse, executive chairman of Bridge Investment Group, told delegates about a recent effort to source financing for an office acquisition. When Bridge signed a contract to acquire the asset, the firm sent a proposal to all 66 of the lenders the firm had done business with over the past year. Bridge received only one counterproposal, which Morse said spoke volumes about the perceived distress in the office sector. 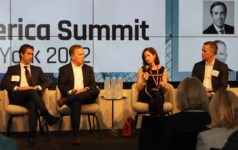