This article is sponsored by Savills Investment Management

Savills Investment Management launched a core-type Japan residential strategy in late 2020 and its team has been investing in the sector for decades. Japan co-heads Tadaaki Kurozumi and Tom Silecchia reflect on the crucial drivers of the market, how best to source and secure assets, and why Tokyo should be the prime target market for investors in the sector.

What are the drivers of the Tokyo multifamily market? How has it been affected by the pandemic?

Tom Silecchia: The pre-covid thesis for the sector is largely unchanged: migration from regional Japan and a growing number of households. Inward migration slowed during the covid-19 upheaval; however, our research has found that younger people – students and graduates – continued to move to Tokyo throughout the pandemic.

Occupancy levels and rents have remained very stable throughout. The broader demographic picture of more, smaller households remains the same and this continues to drive demand. Fundamentally, Tokyo remains an incredibly attractive place to live and offers opportunities in virtually every sector of life in Japan.

Tadaaki Kurozumi: The infrastructure works carried out in advance of the Tokyo Olympics also strengthened the market by improving the connectivity within the city as well as to the rest of Japan.

Improved infrastructure such as the creation of new metro stations or bus routes has substantially increased value in certain areas and makes Tokyo an even more attractive place for young Japanese people to live and work. It has also encouraged corporations to set up businesses in Tokyo, positively impacting the growing demand for employment.

TS: There is also constrained supply and that hasn’t changed. For example, at the higher end of the market, there is more demand for larger units, so some new developments are addressing this demand.

However, most of the mid-market demand is still for smaller units and now there is less new space aimed at that segment. From an investment perspective, we will focus on that mid-market sector.

Why do you prefer the mid-market sector?

TK: The make-up of Japanese society in terms of household income favors mid-market residential investment due to its large middle class and the subsequent stable demand from this sector. The demand stability also stems from relatively low tax levels for
middle-income residents, affordable rental levels, and limited challenges surrounding inflation compared to other developed countries.

“As an entry point into the residential sector, Japan offers unparalleled size
and liquidity”
Tom Silecchia

TS: Our experience from going through several cycles has been that the higher the monthly rent, the larger the floor area, the more volatility you will see in multifamily assets. That is both in terms of cap rates and rental levels. Particularly after the global financial crisis, the mid-market stock recovered very quickly, especially in Tokyo.

Why is Japan’s multifamily sector, and Tokyo in particular, attractive to investors?

TS: Just in terms of the depth of the market, it is unique for Asia. As an entry point into the residential sector, Japan offers unparalleled size and liquidity. It is also an extremely defensive investment. It does not rely on robust economic growth to drive returns and it has been incredibly resilient throughout economic crises, particularly in Tokyo and particularly in the mid-market segment.

For context, the post-GFC peak-to-trough rental decline for Tokyo mid-market residential was approximately 8-10 percent, versus a 40-50 percent drop for Tokyo offices. Current rents remain historically affordable – still on average around 5 percent lower than pre-GFC highs – which has supported asset performance through the pandemic and mitigates
downside.

The defensive nature of the investment means it is often a first step for European investors coming to Asia. Low volatility means it can be the cornerstone of an Asia-Pacific investment strategy. The sector also offers strong cash yields on a risk-adjusted basis.

The Japanese multifamily sector is said to be increasingly competitive; how can you acquire assets at the right price?

TS: There is a narrative that, because of the recent interest in Japanese residential property from international investors, it has hugely increased competition for assets. The reality is that residential has always been a core asset class in Japan.

Wealthy individuals, small companies and a broad range of other domestic investors have always bought residential assets because they understand the asset class, they are investing in their locality, they understand the local market. It provides a high and stable yen yield for investors.

The foreign component of the market is small compared to other markets in the region, so the fact that there are a number of very large foreign funds being raised for Japan does not necessarily mean that the overall capital pool for residential transactions has increased as much as one would think. Large foreign funds are covered in the press, whereas many domestic investors are small and dispersed, and there is also very little data on those transactions. So, when there is a large public bidding process there will be more competing participants and keener pricing, but that is not necessarily representative of the entire residential market.

TK: Our investment strategy strays away from participation in open-market bids. We prefer to deal directly with sellers or the affiliate creditors to acquire assets off-market. Our long-standing relationships, track record, and depth in the market has allowed us to acquire such assets without having to pay a premium to market.

Micro-market analysis is also very important in finding the right assets. Values and rental levels of Japanese real estate can vary by street so it is imperative to have a full understanding of micro-market conditions prior to the investment. 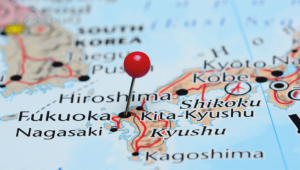 Savills Investment Management’s Japan residential strategy has focused primarily on Tokyo, with selective acquisitions in other cities, where the multifamily market tends to be more volatile.

However, the southern city of Fukuoka, on Kyushu Island, has historically been more stable than other Japanese provincial cities. It is the closest Japanese city to South Korea, China and Taiwan.

Savills IM Japan co-head Tadaaki Kurozumi says: “Fukuoka’s closeness to other Asian nations and its links with them means more Asian capital at play in the real estate market, which improves liquidity. Strong links to other Asian economies add stability.”

Co-head Tom Silecchia adds: “Fukuoka has a lot of large homegrown companies and functions very independently from Tokyo. Its physical remoteness from Japan’s capital and long local history enhances its economic independence. It is similar to Seattle or other West Coast US cities in that respect.”

Fukuoka also has the youngest population profile of any major city in Japan, as well as a relatively large foreign-born population. It is also a location for many start-ups and offers a unique start-up visa to foreign entrepreneurs who wish to launch new businesses.

What type of assets and which locations, in Tokyo or elsewhere, provide the best opportunities?

TS: Some of our best-performing assets have been those with somewhat different characteristics; for example, larger units a little further from the city center, but where there are good transport links. Likewise, older units, as long as they have ‘good bones’ and match the most recent earthquake code, can still make sense in a micro-market with limited supply. We do not limit our search to an overly prescriptive definition of Tokyo; highly liquid commuter areas of Greater Tokyo are also on our radar.

TK: We have acquired residential assets outside Tokyo, in the major cities (Osaka, Nagoya, Sendai, Sapporo and Fukuoka) as they also have good opportunities, but tread carefully given they are more susceptible to volatility relative to Tokyo. Cities like Fukuoka with a younger and vibrant population and high foreign migration have promising demographic fundamentals for the residential sector.

What opportunities are there to add value to residential assets?

TS: We have been rolling out quite a lot of initiatives at asset level. For example, improvements to security, such as cameras and multiple layers of security at access points, are very popular with tenants in Japan, even though this is one of the world’s safest places to live. We also aim to improve building ESG performance. Working with developers helps in this respect as we can cooperate during the construction process to install devices which are energy efficient and capture usage data to improve the asset’s performance.

TK: Japan is sometimes considered to be lagging in ESG terms, but actually – as a nation which must import energy – we have long had a focus on energy efficiency and this is something that has been in the public consciousness. We have been involved for some time and brought in our property managers and asset managers to get them on board with the necessary actions. We also have in-house design and architecture skills that help us identify buildings where ESG improvements can be made and identify how we can add value.