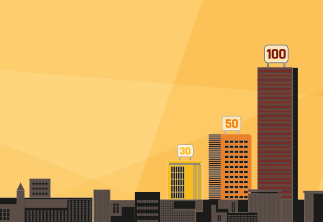 The capital raisers in the PERE 100 invested $202 billion during 2018 – activity that represents 24 percent of all stabilized asset purchases globally, according to Real Capital Analytics. This same group of 100 investors accounted for 20 percent in 2017, indicating the increasing importance of this cohort as a source of capital.

The group sold $168 billion during 2018 – reflective of a net investment of $34 billion in the year and a reversal of the trend in 2017. Then, the group sold more than they bought to the tune of $25 billion, suggesting that in 2018, private equity real estate firms were feeling more confident about the real estate investment markets.

Blackstone dominated the field in single asset or asset portfolio activities, although the largest acquisition recorded was by Cerberus’s Project Marina residential portfolio in Spain for close to $6 billion. KKR’s participation in the JV acquiring the $1.9 billion Yeoksam-Dong complex in Seoul was the second largest.This group of investors is more likely to engage in large entity transactions – investments that typically involved the sale of a platform rather than the interest in single assets. These accounted for 22 percent of overall activity, double the level recorded during 2017. The dominant firm during 2018 was Brookfield via its privatizations of real estate companies Forest Realty and GGP in the US. The firm’s platform acquisitions pushed it above even Blackstone, although the gap between Brookfield and Blackstone and the rest of the field is over $20 billion.

The location of the firms does not give an insight into the source of the underlying investment capital, as it is typically raised globally. However firms headquartered within the US accounted for $145 billion, or 72 percent of the overall investment activity. Brookfield boosted Canada’s activity to 17 percent of activity in 2018. Firms headquartered in the UK, France, Switzerland, Sweden, Singapore and Denmark all sold more than they bought during the year.

The US was also the number one destination for new acquisitions, with 59 percent of activity targeted at the market. Even without the significant flows of capital from north of the border, the US would remain the top destination by some margin. Spain and Germany both attracted close to $12 billion of investment while the UK and France received over $9 billion each. At the smaller end, markets such as Russia, Puerto Rico, Romania and Hungary saw investment, but largely the result of assets within larger portfolios than single assets in these countries.

It is difficult to untangle political uncertainty from market cycles. However, the UK saw these firms invest $10 billion during the year but sell $21.5 billion.

This could reflect concerns about Brexit, but it could also be the unwinding of funds set up following the financial crisis which will be moving toward their natural ends. The UK was an early and large beneficiary of post-GFC activity.

Germany also saw investors sell more than they invested, though not to the same differential that the UK recorded.

France recorded double the amount of new investment versus the selling activity of the same firms. Of the 43 countries in which these firms were recorded investing in during 2018, 22 saw net positive investment while 19 saw net negative activity. This totals 41; the remaining two countries are accounted for by one of the top 100 firms selling to a peer in the list offsetting the activity.