This article is sponsored by Panattoni

The European logistics real estate market has never been hotter, with a wide variety of local and global investors clamoring for assets to fulfill their allocations. Much of that sentiment can be credited to consumers’ increasingly enthusiastic embrace of online shopping, which is necessitating the construction of a new breed of fulfillment centers.

US-headquartered developer Panattoni established its European platform in 2004 and has since built up a formidable reputation for delivering logistics buildings in central Europe, Germany and the UK. Panattoni Europe chief executive officer Robert Dobrzycki explains to PERE’s Stuart Watson how the company is hoping to ride the e-commerce wave into other European territories.

Why is this a good moment to expand your European business?

E-commerce is transforming the logistics business everywhere, Europe included. Not only is it driving demand among our customers as their online business expands, but also demand from investors. Because of the e-commerce story they see logistics as probably the best real estate asset class right now in terms of the supply-demand fundamentals and potential future growth, so they are increasing their allocations to the sector.

The structural shift that is favoring our sector is taking place at the cost of traditional retail, and e-commerce logistics is emerging as a new form of retail asset. We are no longer just an industrial developer, but also an e-commerce retail development company.

Despite it being pretty late in the real estate cycle, the increased occupier and investor demand we are seeing in the markets where we are already established suggests to us that this is the right moment to expand into new geographies. When Panattoni set up its European business we focused mainly in central Europe because we saw demand in the region being driven by logistics for manufacturing and by access to cheap labor. The driver for expansion into western Europe now is not production, but increased consumption based on the growth of e-commerce.

Of course, western Europe is a mature and stable market, but the whole retail supply chain is changing because of the growth of e-commerce. From that standpoint it could be considered an emerging market, so that makes it a favorable time for a development company like us to enter it.

We are already developing in the UK and Germany and are expanding into the Netherlands and Spain. In the future we will look at France and Italy too. E-commerce retailing will grow throughout Europe, but it will do so fastest in western Europe where consumer spending is stronger. We are developing more logistics space in Europe than any other developer now, with an operation and a set of client relationships that we can lever to push into western Europe on the back of e-commerce-related growth.

What prompted you to start with the Netherlands and Spain?

Even though it is not a very large country, the ports of the Netherlands and its central location within the west of the continent make it the gateway to Europe. Logistics facilities in the Netherlands often serve other European countries as well as the domestic population, and that strategic hub status makes it an important market for any logistics developer. Land supply is tight, prices are high, and there is already a lot of competition, so it is not the easiest market to enter.

On the other hand, many of the developers are local rather than international players, so by virtue of being a large cross-border business we will be able to access demand from non-domestic customers and investors that would like more exposure to that market. We are in the process of hiring a local team there, because having boots on the ground is always desirable, particularly when you are looking to secure land.

A brownfield strategy – acquiring older sites, improving their situation and demolishing buildings – could be an effective approach there. However, it is important not to be too rigid in approach, but instead to match the opportunities that arise to customer and investor demand.

There is also relatively little competition from other international developers in Spain, but unlike the Netherlands, logistics operations there tend to be more focused on serving the domestic markets of Spain and Portugal. Panattoni’s customers in Spain may well be global e-commerce businesses, but they will generally be serving local consumers.

The market is already quite active in Barcelona, Madrid and Valencia, but other cities that will generate e-commerce demand are not yet so well covered. We find clients by following the population and consumption, then the investors will follow.

We will aim to establish our business in those two countries in 2020, and while we do that look for people to help us to expand into Italy and France. For the new expansions we will work with a number of strategic investment partners in the same way as we have done in the UK and Germany, however we try to keep our balance sheet healthy enough to pick up opportunities that come along which might not fit our joint venture strategies, but which smaller local players might find difficult to execute.

With logistics real estate in such high demand, are the established European markets looking overheated?

Germany is still perceived by investors as the most attractive European logistics market. It has the largest population, highest consumption and a strong manufacturing base, as well as being centrally located in Europe. However, it is very competitive in terms of investor demand. Almost everyone is trying to play in that market.

Investors unable to acquire at the right price in Germany and western European markets are looking toward central Europe, where in many cases the users are serving consumers in Germany and other parts of western Europe anyway, but from more cost-efficient locations where there is better labor availability, like Poland and the Czech Republic. There can be a yield differential of 150 basis points between fulfillment centers on either side of the German-Polish border, even if they are operated by the same company and serve largely the same market.

That is an investment opportunity because the yield differential doesn’t make a lot of sense when the investment on the eastern side of the border is actually likely to have greater appeal for potential occupiers. We are seeing a lot of Asian money going into central Europe and trying to acquire product at those more attractive yields.

There is some caution among investors, but many of them think that even if it is late in the cycle this asset class is probably the best one to invest in at this stage. Looking at interest rates and how returns for alternative investments compare, investors have to place some money in real estate, and there is no better real estate asset class to be in right now than logistics because of the momentum provided by e-commerce.

There may be a broader economic slowdown – we see that happening even now – but in our view and that of our investors, logistics is perfectly positioned to weather a downturn. This is what we are seeing in the UK right now. Brexit uncertainty has delayed business decision-making and weakened the economy, but e-commerce has hardly been affected at all.

An increasing number of occupiers are using large, highly-automated multi-level buildings, so to an extent the asset class is becoming more standardized, but they are still regarded as a bit specialized in terms of their appeal to a broad spectrum of occupiers. There are features around these assets that can help investors to be comfortable with them, though.

Developers can mitigate the risk by asking for longer leases, while the amount of investment that e-commerce businesses put into those buildings, together with the difficulty of recruiting and retaining labor, makes it unlikely that occupiers would choose to move. With the last-mile facilities there is less of an issue. Because they are located within city boundaries, it is hard to imagine those locations losing value.

Does European logistics face any challenges? What will be the dominant industry trends in 2020?

Shortages of land can present a challenge, and in some markets obtaining building permits is also starting to be difficult because planners dislike the unfriendly features produced by logistics buildings such as increased traffic. But given how much more labor e-commerce utilizes than standard logistics that is the key challenge.

Occupiers’ biggest fear when selecting a location is that there might not be enough labor. They will often prioritize that over the specific nature of the building.

Sometimes automation can provide the answer, but in many cases it helps, but does not entirely solve the problem. Labor is driving where customers will locate and therefore determining what will be the strongest locations over time.

There will be a huge wave of last-mile developments in western Europe. We are already seeing that in the UK and Germany as e-commerce retailers reconfigure their supply chains to serve their customers more efficiently.

I cannot imagine that yields will compress further in Germany – returns there will be driven by rental growth – but there may be some cap rate compression in Spain, Italy and central Europe because the appetite for the asset class will only increase. Asian investors will continue to be present in Europe trying to acquire logistics property. In the UK, there could be a bit more certainty next year so we may see more customers outside the e-commerce sector signing leases. 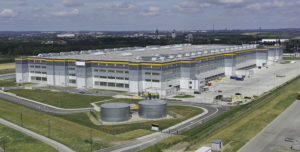 If further proof were needed of the rapid growth of e-commerce logistics in Europe, the fact that Panattoni developed no fewer than three huge distribution centers for Amazon last year in Poland alone would put the matter beyond doubt.

The three developments comprise a 645,840 square foot fulfillment center in Bolesławiec, a building of 484,380 square feet in Łódź, and a 2.26 million square foot leviathan in Gliwice (pictured), bringing the total number of large-scale projects that Panattoni has undertaken for the e-tailing giant to eight.

The Gliwice building, which was completed in September, has four storeys and includes 80,000 square feet of office space. Developed on a plot of 56 acres, the building measures 317 meters long, 182 meters wide and 26.7 meters high, with a floor area as big as 29 soccer football fields. It will help Amazon to service growing demand, increase its product selection and support more third-party sellers.

All three projects were forward-funded by the same unnamed US institutional investor, which is also providing capital through a joint venture arrangement for the roll-out of a program of smaller last-mile distribution centers for Amazon in Germany, with three developments completed and three in the pipeline.

“We feel that is just the start,” says Dobrzycki. “All over Europe, large e-commerce customers are choosing to locate large warehouses close to the labor force while also acquiring last-mile facilities near to consumers.”