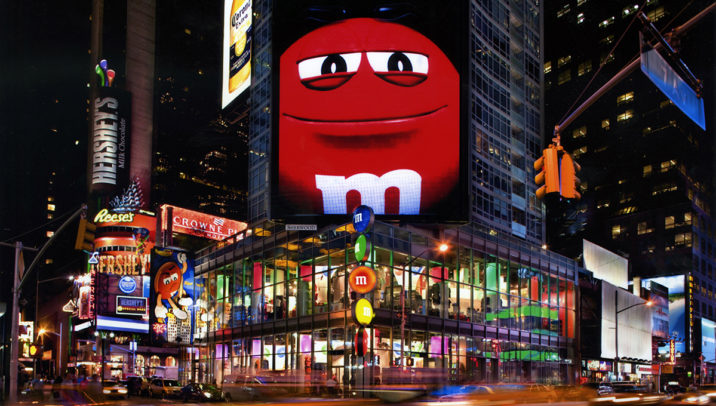 The building 1600 Broadway in New York has become a landmark destination for tourists and locals alike. Located in the heart of Times Square, M&M’s World slots into this neon-lit locality, with windows surrounding the store that allow passers-by to view the candy displays inside, writes Jessica Nangle.

The 26,000-square-foot shop is 100 percent leased to Mars Incorporated and will continue to serve as a flagship location for M&M’s World following a 15-year lease renewal at the location in 2019. Paramount has taken a 9.2 percent stake in the deal and will serve as the asset’s manager.

If the walls of M&M’s World in New York could talk, they would tell stories of excitement from the millions of visitors who walked through its doors since its opening in 2006. It is New York’s largest candy store spanning three levels, with many attractions including a two-story high candy wall.

1600 Broadway was formerly the Studebaker Building, which was built in 1902 and comprised 10 stories occupied by the now defunct American wagon and automobile manufacturer Studebaker. Sherwood Equities purchased the property in 1987, and as Times Square began to flourish into the bustling neighborhood it is today, the developer opted to build a new building to keep pace. The firm demolished it in 2004 to develop a 25-story mixed-use tower that includes a residential condominium and the multi-level retail area now home to M&M’s World.

This is not the first time Paramount has partnered with BVK. The German group also owns a 31.1 percent stake in Paramount’s 300 Mission Street, a 24-story Class A office tower located on the corner of Beale and Mission Streets in San Francisco.

Albert Behler, chairman, chief executive and president of Paramount, says this latest deal was attractive to BVK and Paramount thanks to the asset’s long occupier commitment. “M&M’s World has long-served as an icon for global tourism, and its recent 15-year renewal and significant commitment to improve the space is a testament to the long-term value of this iconic Times Square retail location.”

As such, the walls of M&M’s World will provide a lengthy tenure with Mars for their new owners to chew over, time enough for millions of tourists to munch their way through the copious amounts of confectionary sold inside.