Home News & Analysis Managers It may be flirting with an IPO, but look for GLP US...

GLP’s US logistics portfolio will probably have a new home by the end of the year, as it is said to be eyeing a move to the public market. If history is any indication, however, it is more likely to stay in private hands.

Based in Chicago, GLP’s US arm manages three funds and controls more than $16 billion of assets. Although the Singaporean firm has yet to confirm such a plan, it is reportedly preparing to convert its 1,345-property, 188-million-square-foot portfolio into a listed REIT.

There is a certain logic to that pursuit. Property values are high and industrial real estate is especially popular. A US public offering could allow GLP to cash in on this demand, now that REITs are, on average, trading at a 4.2 percent premium compared with their net asset values, according to Green Street Advisors.

As Ming Mei, chief executive and co-founder of GLP, told PERE recently, going public is a proven strategy in “mature markets in developed economies where there is core income,” especially when liquidity is top of mind.

However, before filing an initial public offering, GLP will have to fend off a horde of private suitors. Bloomberg reports the firm has already fielded inquiries from several prospective buyers, the most serious being Prologis, whose China and Japan business spun out to form Global Logistic Properties in 2009. It appears old ties run deep.

Recent trends indicate such offers will be hard for GLP to pass up and market performance suggests it would be unwise to do so.

IPOs of all sorts have been declining in number since the 1990s and the real estate market is no exception. Most years have only seen a handful of new REITs, according to Nareit, a trade organization. The number of IPOs has only reached double digits once in the past decade – 19 in 2013 – and three times in the past 20 years. In 2018, there were just five. Meanwhile, acquisitions and take-private transactions have proliferated as growth-minded mega managers such as Blackstone and Brookfield scour the public and private markets. GLP was publicly traded until a consortium of shareholders delisted it in 2017.

The public markets can be an efficient way to raise capital, but the tradeoff is volatility. Also, while REITs have traded at a slight premium to NAV since April 1, that stability is a new phenomenon and a relative anomaly. For 30 months prior, REITs traded at a discount to NAV, per Green Street, bottoming out at 12.6 percent in January.

PERE’s bet, therefore, is that the division stays in private hands. Today’s lack of IPOs and current REIT performances would suggest the listing overtures will ultimately serve as a stalking horse only – as do the history books. After all, GLP’s US division started out as a Blackstone platform, IndCor Properties. The New York manager was preparing an IPO for the 117 million-square foot portfolio in 2014 when GLP, along with Singaporean sovereign wealth fund GIC, swooped in to buy it for $8.1 billion.

It is possible the swirl of interest around GLP’s US arm gives credence to a potential IPO. But the likelier scenario is that GLP exits the US by the same way it arrived – privately.

The PERE Global Investor 50 is now open for submissions! 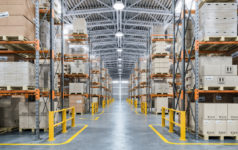 Brookfield backs recap as it hits RE fundraising trail