Since the beginning of the pandemic, logistics investors have witnessed how consumer demand has accelerated the growing appetite for e-commerce globally, which, in turn, has increased the need for logistics space. The covid-19 crisis, however, has also created an immediate challenge – global supply chain volatility.

For managers of logistics assets, the most direct impact of the pandemic is that it has further limited the supply of materials needed to build industrial developments. This is occurring at a time when managers are already facing competition from other developers that are also looking to build logistics facilities.

In the US, the sector’s construction pipeline has reached a record level. However, advisory firm Cushman & Wakefield says that the recent commodity shortages and increased pricing going forward could slow real estate developers, potentially driving down vacancy rates even further and providing a further tailwind for existing asset values.

In Europe, industrial property investors and developers are facing difficulties in procuring materials such as steel, concrete and timber to build warehouses, as they struggle to respond to the increasing demand for logistics space amid permit constraints and growing competition. An added hurdle in 2022 is going to be the availability of labor for construction activities, says Kevin Mofid, head of UK and EMEA logistics research at Savills.

“Supply [of new industrial assets in Europe] is already at record low levels and, at the moment, we simply cannot build warehouses fast enough,” says Mofid. “For developers, this is a problem because of the cost implications and construction delays. But for logistics investors, this is not a bad thing. It’s helping them increase the value of warehouses they own. Meanwhile, occupiers are competing for the best buildings and paying higher rents or committing to a longer lease.”

Market participants agree that supply chain challenges brought on by covid-19 have been a major driver of rental growth, as occupiers are looking to increase inventory to avoid shortages and are consequently seeking more space. Thus, in a move to boost resiliency over efficiency, ‘just-in-time’ inventory management models that have been in place for decades – where the aim is to match production as closely as possible to consumer demand – are being replaced with a ‘just-in-case’ approach, which involves producing a surplus of goods and carrying larger inventories to prevent stocks from running out.

This shift to increase ‘safety stock’ began as soon as the pandemic created global supply chain volatility. According to consultancy CBRE, shipping volumes surged in 2020 as retailers and manufacturers rushed to replenish depleted inventories, resulting in greater demand for warehouse space.

During the pandemic, a range of other issues – including adverse weather events, the blocking of the Suez Canal by container ship Ever Given and, more recently, a shortage of truck drivers – have exacerbated this trend. José Pellicer, head of investment strategy at M&G Real Estate, part of M&G’s £65 billion ($86.1 billion; €76.5 billion) property investment business, explains: “Because of lockdowns, there’s been a massive increase in demand for goods, but we have seen labor shortages, particularly of truck drivers.
“So, despite higher demand, goods are produced and transported more slowly. Supply chain management companies are therefore finding themselves with an overflow of goods that they need to store and are trying to secure space to store these goods as quickly as possible.”

One of M&G’s tenants renewed a five-year lease for 25,000 square feet and took an additional 14,500 square feet on the same industrial estate on a 10-year lease because of the business’s requirement for more space in the UK. “We have seen strong demand across the board, particularly for fulfillment centers – warehouses next to production facilities and next to cities,” Pellicer says.

Alistair Calvert, chief executive of Clarion Partners Europe, has seen “unprecedented” demand for logistics space. “Largely, the supply chain disruption is resulting in occupiers requiring more logistics space,” he says. “On the flip side, though, we have a couple of buildings that are running at a very small fraction of capacity because the underlying tenants’ contracts are either being mothballed or running very slowly due to part shortages – most notably among automotive-related tenants. This is the exception, though, and we expect it to be temporary.”

So far, global occupier demand for industrial real estate space continues to outpace supply, resulting in increasing rents. CBRE data shows industrial rents grew by 5.8 percent in the US in H1 2021, compared with 3.1 percent in EMEA and 0.8 percent in APAC.

Calvert, however, notes much higher levels of rental growth. “Look at some of the leases that we’ve signed in the last two years,” he says. “We have seen average increases of 25 percent in the Netherlands and 26 percent in Spain. That’s versus previous leases agreed just three or four years ago. So, broadly speaking, we’re seeing 20 percent to 30 percent uplifts on [new lettings] and renewals, even though they’ve already been subject to annual indexation. And you’re not seeing that in the data.

“When we’re negotiating for our speculative developments, we get very little resistance on rents from tenants – they may have other demands but are willing to pay higher rents.”
He points to ongoing e-commerce penetration as arguably the main driver of this rental growth, with supply chain disruption another contributing factor.

Beyond ‘safety stock’ strategies and the increase of inventory levels, tenants can insulate themselves from future supply chain disruption by nearshoring or reshoring industrial facilities. This, in turn, could create a ripple effect for warehouse demand. Although this trend is still incipient, some manufacturers are seeking to bring their supply chains closer to home in the wake of the covid-19 disruption. According to a survey from the Institute for Supply Management, based primarily on US-based respondents, 20 percent of firms were planning or had already begun to reshore or nearshore some operations after the first months of the pandemic.

Savills’ Mofid thinks that, so far, nearshoring is more talk than action. “It takes a very long time to make this type of change – moving your manufacturing from Asia to Europe. It doesn’t happen quickly,” he says. “But this is something that we expect to happen: people are much more interested in supply chain resilience now. If it does happen, we think that markets in Eastern Europe are going to benefit more than Western Europe, as they have more land, cheaper rents, cheaper land values and cheaper wages.”

Adrian Karczewicz, head of divestments at Skanska’s commercial development unit in Central and Eastern Europe, agrees: “Many manufacturers with a European presence are looking to nearshore their supply chain and evaluate selected countries in Eastern Europe, such as Poland.”

Despite higher wages than in traditional offshore locations, Karczewicz notes that the best advantage CEE countries have over other destinations is EU membership. This gives access to one of the largest markets in the world with minimal administrative burdens and no tariffs.

“Moving business processes to countries close to the main location of the company or to its clients can reduce costs without some of offshoring’s problems, such as time differences and cultural differences,” he says. “Nearshoring in manufacturing can also lower transport costs and shorten delivery times.”

“If rental levels continue to rise at the pace they have been, manufacturing occupiers in particular may consider whether it is more prudent to own the freeholds of their strategically important buildings, rather than to lease them and have more uncertainty regarding future costs”

One of the challenges for Europe’s manufacturers looking to nearshore is the shortage of available logistics space, which could place additional upward pressure on rents. There could also be a risk of increasing wages. Mofid argues that, given the potential higher expenses linked to nearshoring, this could push manufacturers to own the buildings themselves, rather than lease them from investors and developers.

“Manufacturing buildings often have highly capital-intensive fit-outs,” he says. “If rental levels continue to rise at the pace they have been, manufacturing occupiers in particular may consider whether it is more prudent to own the freeholds of their strategically important buildings, rather than to lease them and have more uncertainty regarding future costs.”

An opportunity to build and sell the new assets required on the back of nearshoring is also limited. “Very few landlords have land plots for sale at the moment, so I don’t think this presents an opportunity for investors in the short term,” Mofid adds. “As time passes, however, owner-occupiers may consider whether they wish to enter into a sale-and-leaseback arrangement with an investor.

Regardless of whether these speculations about nearshoring become reality – and regardless of how long supply chain turbulence lasts – industry sources agree that current market fundamentals remain strong and will continue to fuel rental increases and investor demand.

“Supply chain disruption is going to last probably another 18 to 24 months,” says Clarion’s Calvert. “This will put temporary pressure on the logistics space.”

He adds that a much bigger effect on demand for logistics, both from occupiers and investors, will be the “forever shift” to e-commerce: “While we don’t assume there’s going to be further yield compression, we still think that logistics will be a relative outperformer for quite a long time yet, given the rental growth that we’re seeing and expecting.”

M&G’s Pellicer agrees that the global e-commerce boom is the “number one” tailwind for logistics, followed by supply chain disruptions and the increased number of institutional investors turning to logistics to diversify portfolios away from retail and, to a certain extent, offices.

Although he believes logistics is well placed to be a “winner” asset class, he notes the threat of increasing values and higher rents while new supply of industrial assets goes up: “There might be a cyclical downturn at some point, but certainly while there is a pandemic and while real estate investors are thinking about their portfolios for the future, the industrial sector is on the buy list for many people.” 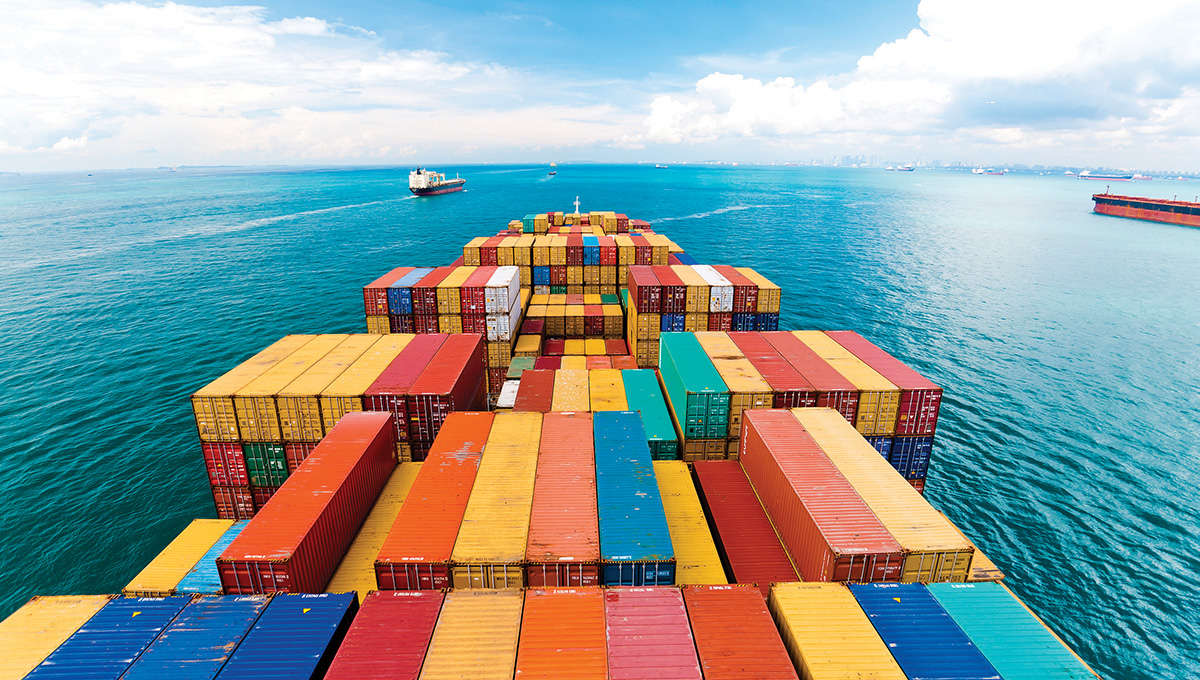 How tenants are coping with rising transportation costs

Last December, for instance, the average cost to ship a 40-foot container was 238 percent higher than the previous year, according to shipping consultancy Drewry’s World Container Index. Tenants are also dealing
with warehouse rent increases, but the impact of transportation cost rises is much greater.

According to consultancy CBRE, transportation costs typically account for half of an occupier’s total logistics spend but can easily rise to 70 percent – while fixed facility costs, including real estate, account for only 3 percent to 6 percent. “It takes roughly an 8 percent increase in fixed facility costs to equal the impact of just a 1 percent increase in transportation costs,” Joe Dunlap, managing director of CBRE Supply Chain Advisory, said in a report released in September 2021.

Thus, tenants hurried to leased warehouse space last year to hold more inventory and mitigate transportation costs, which were growing at a much faster pace than lease rates. In the US, industrial leasing volume, including renewals, reached a record 587 million square feet between January and July, up by 52 percent from the same period in 2020. Given robust demand and national vacancy rates of 4 percent, CBRE in September 2021 reported a 9.7 percent increase in average rents in the US since August 2020.