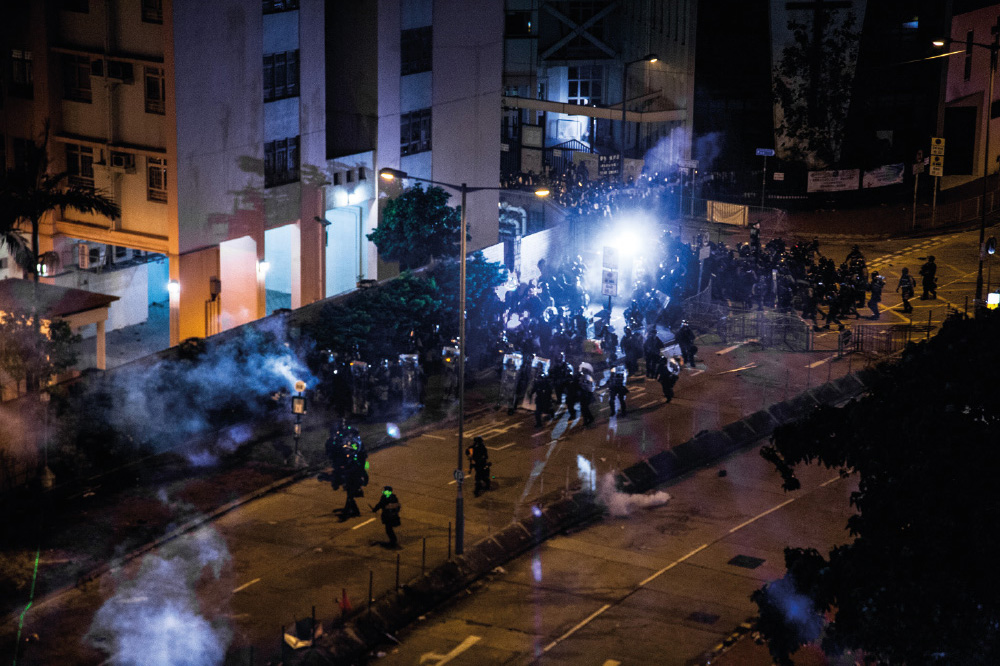 Festival Walk, an upscale commercial complex in Hong Kong, reopened its doors last month after damage from protesters saw it shuttered for repairs in November.

The vandalism at the mall marked one of the higher profile incidents in seven months of social unrest in Hong Kong, Impacting Singapore state-owned manager Mapletree Investments, for institutional capital it was a standout episode in the protests. The Temasek-owned firm holds the asset in its Mapletree North Asia Commercial Trust REIT. The share price of the REIT dropped by 4.92 percent from S$1.22 ($0.90; €0.82) to S$1.16 on November 13, the day following the vandalization. At the time of writing, the stock price has plunged more than 10 percent since the unrest began.

Mapletree declined to comment on questions pertaining to Festival Walk and MNACT.

The unrest has effectively put the brakes on already dissipating institutional appetite for the city’s real estate. PERE spoke with four longstanding Hong Kong managers; three of which say they have not bought or sold in the city since the outbreak of the protests last June.

“It’s all about the uncertainty. If you are an investor and looking to buy at the moment, you want to get a healthy discount on the price to reflect the current market situation that takes into account the risk of the future,” Andrew Moore, chief executive officer at manager Pamfleet, tells PERE. “That’s why the transaction volume has been so low lately.”

Not the only downward factor

The social unrest is just one factor, albeit a significant one, behind the slump, notes Joseph Tsang, chairman of global property broker JLL’s Hong Kong office. He points to the amount of Chinese capital invested in Hong Kong shrinking over the past two years due to the Chinese government’s tightening of capital controls. According to JLL research, only 16 percent of the total investment volume in the city involved buyers from mainland China last year. That was the lowest ratio since 2017.

Chinese companies have also become targets for protesters’ ire; anti-Beijing graffiti has become commonplace, while smashed windows on Chinese businesses often follow a protest. In one incident shortly after New Year’s Day, bank HSBC removed two of its iconic lion sculptures outside its headquarters in the city’s financial district. That happened after the bank froze protesters’ fundraising accounts, according to local media reports.

“You can expect the Chinese corporate expansion to be slower for a while under the current environment. They most likely will expand a lot more cautiously compared to what happened before,” Nicholas Wong, partner at consultancy Townsend Group, adds.

With prime office yields long trending at between 2.5 and 3 percent, institutional capital has largely been inactive in Hong Kong, even before the protests, according to Tsang. “It’s only the local investors who are brave enough to get into the market with those kinds of yields,” Tsang says. In 2019, eight out of the 10 biggest transactions in the city were carried out by buyers of a Hong Kong origin, according to data provided by CBRE research.

But local players have their concerns. Despite having completed some of Hong Kong’s biggest transactions in the past three years, Gaw Capital is one manager to be cautious in recent years due to pricing. “You have seen us going from relatively active to quite a defensive strategy, namely the community shopping centers and offices in decentralized areas,” Goodwin Gaw, chairman of Gaw Capital Partners, notes. These transactions include the firm’s purchases of 29 community malls from Link REIT and a portion of Swire’s City Plaza in Quarry Bay. So far, these investments have been performing at, or above, underwriting, Gaw says.

Phoenix, meanwhile, has dialed down its return expectations for Hong Kong, given the current situation. The firm declined to comment on the specifics of its return expectation. “It’s all about the uncertainties and no one has any idea what the outcome would be,” Sam Chu, founder of Phoenix, says. “I would rather be more cautious and not overpromise to our investors.”

Chu tells PERE the firm had been reducing its exposure in the city, even before the protests happened, as it saw more relevant opportunities elsewhere, in markets such as Japan. Today, the Hong Kong exposure across its Pan-Asia opportunities fund series accounts for 20 percent of its total asset base, but the allocation in the city is expected to fall after it has fully invested its $1.15 million flagship fund.

Pamfleet, meanwhile, has neither changed its target allocations nor changed its expected returns, according to Moore. The firm’s flagship value-add fund series majors on Singapore and Hong Kong in its investment mandate and the latter remains the main focus. Its second fund, the $400 million Pamfleet Real Estate II, for instance, acquired seven assets in Hong Kong and another in Singapore. For its $450 million third fund, which closed last July, only one outlay has happened. That was in Singapore. Nevertheless, Moore says: “We are in the investment period and are confident we will be able to deploy capital in Hong Kong.”

He explains the Hong Kong market is much deeper and represents a greater number of opportunities than gateway city rival Singapore, even with the current situation. He says the city has a diverse range of rental levels and purchase pricing, from older, lower-quality buildings to grade A buildings, allowing the firm to reposition and add value to underperforming assets – in all market climates. Nevertheless, Pamfleet has not sold or bought any properties in Hong Kong since June last year.

Neither have neighbor managers Gaw or Phoenix. “The whole situation is fluid because this is a political market. How the Chinese and Hong Kong governments will react, or give incentives, there are just too many moving parts in this situation,” Chu says. “Unless there is something interesting in terms of the pricing, I’d rather sit on the sideline.”

Hong Kong’s predicament will, in time, present opportunities for opportunistic buyers. Some such buys have already happened. Hong Kong developer Sun Hung Kai Properties won a tender in November for one of the city’s biggest commercial plots at what was considered a cut price. It reportedly secured the 600,000-square-foot site in West Kowloon for HK$42 billion – a significant discount from an original expectation closer to HK$100 billion.

Shanghai-based KaiLong Group reportedly purchased a 20-plus-story office in Tsim Sha Tsui for HK$448 million from a private family in November last year. It is understood the firm bought the asset at a 30 percent discount to original asking price. KaiLong owns the adjacent building and expects to redevelop them both simultaneously.

“I have always closely monitored the dealflows and I am not betting on the ups and downs of the market,” KaiLong’s chief executive Ivan Ho says. “But I have always been trying to find projects with synergies at good risk-adjusted value.”

Wong reckons much of the capitalizing opportunistic buyers will be able to do will depend on their local networks. “Boutique investment managers, like KaiLong and Pamfleet, buy from people you have never heard of, like private families,” he says. “That’s their niche, so even at a rising market, they are able to source undervalued assets in the city.”

Gaw notes: “The best strategy for Hong Kong is to make sure you have the liquidity when you see the right opportunities. You want to act fast to jump on the right deal because the market is highly sentiment driven. If I see pricing correcting on the high-quality assets, I wouldn’t mind adding another 5 to 10 percent to the portfolio in Hong Kong.”