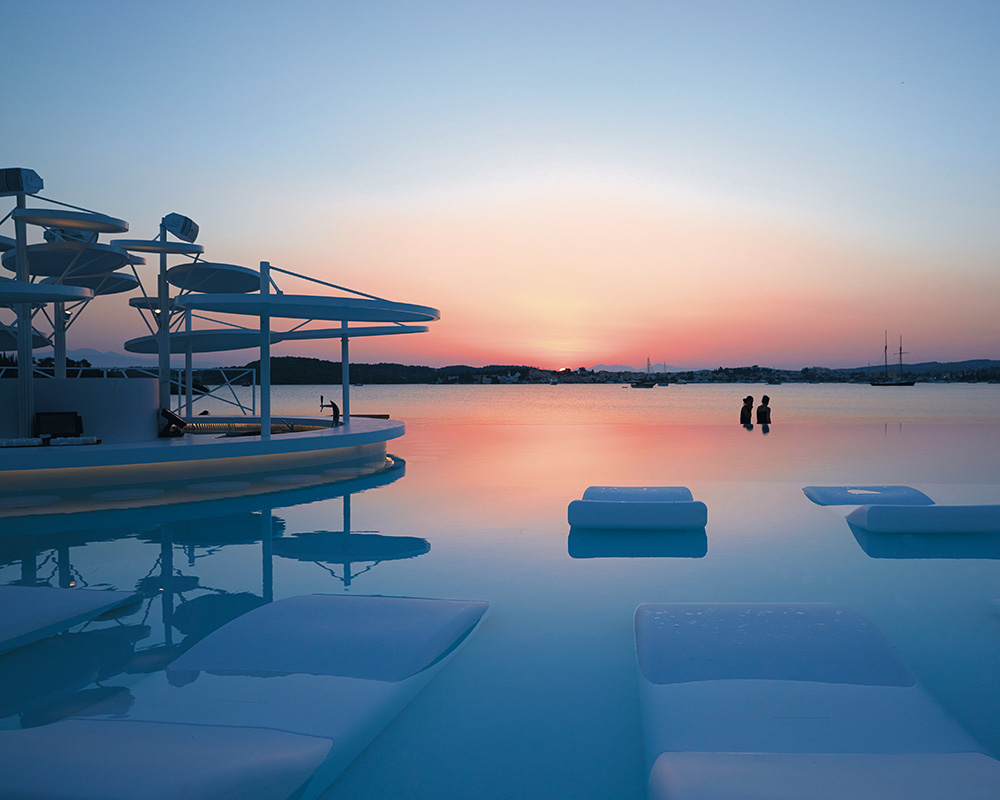 In institutional real estate, Greece has been slowly shifting from a market that gets the thumbs down to one where some managers are doubling down.

In August, Hines formed a joint venture with the National Bank of Greece to redevelop the Athens Heart Mall in the city’s Gazi district into a new outlet mall called Gazi Outlets.

The transaction is the Houston-based real estate firm’s third in Greece this year. In March, Hines acquired a super-prime office building in central Athens and went on to buy a big-box retail development site near Athens in April. Hines made its debut deal in the country in 2017, when it purchased the former Ledra Marriott hotel in central Athens for €33 million, in partnership with Henderson Park.

Invel Real Estate is another repeat buyer in Greek real estate. In April, the firm bought a 32.7 percent stake in NBG Pangaea REIC, the largest real estate investment company in Greece by assets under management, from NBG for €390 million, having already acquired an initial 66 percent stake in 2013 for €653 million. In partnership with Dolphin Capital Partners, Invel also purchased 85.6 percent of a hotel property, the Nikki Beach Resort & Spa Porto Heli in the Peloponnese in October.

In fact, Greece saw €446.08 million of commercial real estate investment during H1 2019 alone – higher than the total annual volumes for each of the past three years, according to real estate services firm Savills.

Such investment is happening as Greece’s economy recovers. GDP growth has been rising since 2015 and is expected to tick up from 1.9 percent in 2018 to 2.2 percent this year, according to the European Commission. And nearly a decade after the start of its government debt crisis, the country exited the last of its three bailouts last year.

“Greece has been probably through the most severe and prolonged recession that any European economy has faced,” says Chris Papachristophorou, founder and managing partner at Invel. “It has lost 25 percent of its gross domestic product and has also been through some political changes and market volatility… I believe that if the country continues on the various reforms that have been already partially implemented and are underway, as well as providing incentives, and maybe a simpler and more efficient tax regime, there will be a significant scope for growth.”

In Europe, Greece “is probably one of the very few real estate markets where you can see growth from both rent improvement and tightening yields,” he adds. In the office sector the yields in Greece were around 9 percent in 2013, but have now dropped to around 7-7.5 percent, according to Papachristophorou. Office yields in the rest of Europe are often below 4 percent, he says.

Paul Gomopoulos, head of Hines Greece, agrees: “We definitely feel that the worst is behind us. We do see the recovery materializing and there have been two years of growth, which we feel will continue.”

Gomopoulos has witnessed firsthand Greece’s bumpy road to recovery. In 2014, as the country’s economy started to show signs of stabilizing, Hines sent the then-London-based Gomopoulos to Athens to open an office. “Unfortunately, that recovery was short-lived because there were snap elections, and then a second round of crises began, with Greece almost crashing out of Europe, capital controls, closed banks, etcetera,” he recalls. “At that point, we took the decision to be patient and not make any investments until the macro environment cleared up.”

It would take another two years for Greece’s economy to gain solid enough footing for Hines to pull the trigger on its first investment in the country.

Against an improving economic backdrop, Greece has seen an uptick in interest from foreign capital. “The outlook is positive with new investments, refurbishments and upgrades occurring in several cities,” says Vlaho Kojakovic, head of property and tourism at the European Bank of Reconstruction and Development.

The EBRD provided a €55 million loan to help fund Invel’s €390 million investment in Pangaea in May and is expected to have invested more than €150 million in the country’s real estate and hospitality sectors by year-end.

“The economic recovery, coupled with structural reforms, is expected to attract more foreign investors,” Kojakovic adds. “In this context, EBRD aims to continue supporting the resurgence of the real estate sector.”

Net foreign direct investment inflows during 2018 reached €3.61 billion, up from 12.5 percent from €3.20 billion during 2017 – the third consecutive year of increased foreign investment in Greece and a 10-year high for the country, according to the Bank of Greece. Real estate was one of the sectors that attracted significant investor interest during the 2008-18 period, the bank says. The category, however, did not include private real estate purchases and sales, which reached a total of €2.12 billion during that time.

Until recently, Greece was not a real estate market that attracted long-term, institutional-style capital. “Talking to a number of these investors, I think for the first time, they are seriously considering Greece as an investable market,” says Papachristophorou. “Are they 100 percent there? Probably not yet. But it’s definitely on their radar screen.”

Early movers have typically been opportunistic investors that have been drawn to Greece because of local banks looking to shed assets. “There’s still a lot of real estate in the form of NPLs, or in the form of assets on the balance sheets of banks,” says Francisco Milone, head of European real estate at alternative investment firm Värde Partners, which acquired a stake in listed real estate investment trust Trastor from Piraeus Bank in 2016. “Banks are obviously not natural holders of real estate. Our strategy is to try to buy from those holders.”

Gomopoulos observes: “On the foreign investment side, there are more players looking around the market today than there were two years ago. But very few have transacted, and of those that have, even fewer actually have a presence in the country with the ability to execute developments and redevelopments.”

The reason for the lack of transactions has to do with both actual and perceived risks associated with investing in Greece, he explains: “There are still investors which are not as comfortable with Greece, so they apply more risk than maybe others to the market. They understand there could potentially be an opportunity, but feel the risk is too high and it’s keeping them from transacting. Or they expect to be able to buy things much cheaper than is actually possible.”

Ric Lewis, chairman and co-chief executive of Tristan Capital Partners, says the bulk of his firm’s institutional investors have red-lined the country, or put it in a special category: “When your country messes up its relationship with the European Union, that scares off the more conservative institutional capital.”

Prior to the Global Financial Crisis, Tristan had owned three or four properties in Greece as part of a larger portfolio acquisition, and while those assets performed well at exit, some of the firm’s clients had gotten hurt through other investments in Greece, Lewis adds.

He also feels Tristan already has a large enough investable universe, covering 19 European countries, that it does not need to actively pursue opportunities in Greece. “I’m okay with the cards I’ve got,” he says. “We’ve got plenty of opportunities in a big European market.”

Additionally, the country is considered a difficult market to transact in, topping the list for the most complex jurisdictions to do business globally, according to a recent report from Amsterdam-based administrative services firm TMF Group.

“Greece’s existing legislation can be complicated and new measures are continually being introduced. Sometimes, multiple laws conflict and it can be hard for businesses to know which one to comply with,” TMF says in its report. “The Greek government does not always provide enough guidance, making this a tough jurisdiction for foreign firms to navigate.”

Investors need stability and transparency in the jurisdictions where they invest, Papachristophorou agrees: “Even if you don’t have the most efficient tax regime, but someone who invests knows he’s paying X percent of his income in property taxes or income tax, then he has the ability to underwrite that. But if they feel that this can change every year, then that’s definitely a deterrent.”

And although Greece has exited its bailout, the country’s public debt remains a concern, he adds: “Whatever government is there – there will be elections in the near term – if they are able to negotiate a further reprofiling, or improvement of the sovereign debt, I think that will remove a significant concern that a lot of these investors have.”

It is also challenging to deploy capital at scale in Greek real estate, with ticket sizes often well below €50 million. “When you look at Greece, one of the issues is it’s a very fragmented real estate market, in the sense you don’t have the big assets that trade in size,” says Milone. “There is the problem of granularity. For a firm like us, it’s not necessarily easy to spend time on a $10 million acquisition when you’re managing $14 billion and your real estate book in Europe is multiple billions.”

To build a portfolio in the country, Värde has opted to establish a local platform through its investment in Trastor. Since its initial stake acquisition, Värde has increased its ownership in the REIT to 56 percent and has expanded Trastor’s local team to 18 people. Värde has been buying more Greek real estate through this team, says Milone.

Liquidity in Greek real estate is also a risk. “Greece is a smaller market than most of the major markets in Europe,” Milone notes. “Our book in Greece is never going to reach the size of our exposure in Italy or Spain. You don’t want to be too big in a market that is small.”

Compared with the approximately €446 million of commercial real estate that traded hands in Greece in H1 2019, Germany recorded the largest transaction volume in Europe during the period, at about €24 billion, according to Savills.

That is another reason why the firm has invested in a listed real estate company, since the path to liquidity is clearer, says Milone, whose firm also purchased a minority stake in Lamda Malls, an affiliate of Greek listed retail real estate company Lamda Development in April 2017.

‘Playing for the longer run’

For those organizations that are engaging, investing in Greek real estate is not viewed as a short-term play, in spite of – or rather because of – the risks involved with deploying capital in the market.

“The decision to grow the platform in Greece is to become a local player for the long term,” says Gomopoulos. “So the decision to come to Greece was not solely based on a specific opportunity to allocate capital and then move onto another jurisdiction.”

Those investors seeking distressed opportunities in Greece may be putting themselves at a greater risk than those that have a long-term investment horizon, he points out.

“The biggest risk in our minds is the potential for a very slow recovery versus a quicker recovery as seen in Ireland and elsewhere,” says Gomopoulos. “We feel more comfortable, even in a scenario where the recovery is slower, that we will have added sufficient value to keep the projects successful overall. If an investor is looking to just time the market and flip an investment, then a slow recovery will have a much greater impact on the returns.”

“We’re playing for the longer run,” Milone agrees. “It’s a longer approach if you think about it, we started researching Greece in 2014, investing in 2016. I’m here telling you in 2019 that I think the opportunity is still super interesting and that our exposure today is not that relevant in light of what we think it could be in the next three years.”