This article is sponsored by Funlive.

China’s burgeoning multifamily residential market has enormous potential, with strong government support and demand from millions of workers who have moved to the nation’s largest cities. But there is no easy money to be made – the sector has already seen its first major bankruptcy. In 2018, Hong Kong-listed China residential developer China SCE launched Funlive, a new residential platform, in order to take a long-term approach to providing homes for Chinese renters. Funlive chief executive Keith Chan talks to PERE’s Mark Cooper about the scope for multifamily in China and the best strategies to exploit the opportunity.

Why is the rental residential market in China attractive?

Firstly, multifamily is an established asset class and sector globally, with proven resilient returns – it was the best-performing US real estate sector during the global financial crisis. It is large and mature in the US and Japan, while developing elsewhere in the world.

Secondly, the demand drivers in China are very strong. China’s first-tier and major second-tier cities have a migrant population of around 40 million who are looking for decent accommodation, but might not be able to afford to buy. On the other hand, this demand of looking for quality apartments has not been met, with a general lack of institutionally managed rental apartments in the market.

Thirdly, the rental residential sector in China has not matured as much as the US and Japan markets, and is very fragmented with no large dominant player. Finally, there is strong demand from institutional investors, because they see the sector developing across the world and in many cases have already profited from their US multifamily investments. Also, the sector is well supported by the Chinese government, which for the past few years has been emphasizing that homes are for living in rather than speculating on.

In many ways, multifamily residential today is similar to the growing trend of logistics five to 10 years ago – you could see global fundamental demand coming from the growth of e-commerce, while the market was undersupplied with modern, institutionally managed logistics properties. At the same time, there were no incumbent players that dominated the market, leaving a lot of growing space for quality operators to thrive.

For our parent company, China SCE, investing into multifamily residential space is a long-term strategic move. It has been active in residential-for-sale development since 1996, and the business has been extremely profitable due to the weight of urbanization during that period. However, margins have also compressed over time and we expect urbanization to slow in the future after reaching around 70 percent, which means the for-sale residential strategy may not have the growth in the future that it has had in the past. Building Funlive as a long-term platform for multifamily apartments, which we expect to become a key property market sector, is an important part of the evolution of the company.

How are the different models for rental residential investment in China developing?

In China, when people notice there is an opportunity in a particular space, especially in the tech sector, they tend to move and speed up the development of their business very quickly. It is axiomatic that a China business needs to build scale quickly, so it can dominate the sector and force out competitors. It is believed to be OK to make losses in the expansion phase because profits will come once you are dominant, but the winning players normally need to have long-term financing capability with trustworthy management.

Most players in the China rental apartment sector have had a similar mentality, but have been generally constrained by time and capital, as acquiring, developing and operating an asset takes time and requires an enormous amount of capital. To get around this, most of the first movers in the China multifamily residential market expanded their businesses using a master lease model, where they secure a long lease, say 10-15 years, from a building owner and convert it to rental apartments for end-users.

Initially, this model was very profitable and scalable, but asset owners have seen the market develop and so the cost of master-leasing properties has increased significantly since 2017. At the same time, operators have found the capex required to convert a building to residential use to be substantial, so many focused on cutting cost and operating low-end products with less investment. With more competition coming into the market, margins for these operators have contracted significantly – some have rented out apartments at a loss in order to keep building scale, but this is not sustainable.

On the other hand, the usual asset-heavy model, where investors and operators develop, operate and hold rental apartment assets, or acquire existing assets for conversion, is much less adopted by the existing players due to the huge capital requirements and the need to build up reliable asset management capability. Funlive is a vertically integrated platform which manages assets for ventures invested by China SCE and institutional investors. We also do master-lease projects if profitable.

So far, we have a total portfolio of 20,000 units, but a lot of those are still in the development stage and around 3,200 are operational. Leasing has slowed a bit temporarily since Chinese New Year because of restrictions on taking on new customers due to the coronavirus outbreak, but leasing is expected to resume to a normal or higher level afterwards. In addition, we expect to add 1,000 operational units in Q2 2020 and hit 10,000 within 12 months.

In terms of market segment, we consider the rental residential market in China as a pyramid, with a small slice at the top consisting of luxury serviced apartments, often targeting expats, and with the lowest slice being low-end co-living type apartments, often very small units, which cater to new graduates. A lot of the master-lease operators target this latter type of space, because the conversion and fit-out costs are lower and you can pack a lot of units in. There is nothing wrong with this, but the projects end up looking very similar. We are targeting a higher grade: the middle and mid-high space in the pyramid, for individuals and families seeking to rent – these are the existing or potential high spenders in the consumer space.

What are the obstacles facing a China multifamily investor?

It is a difficult space to access because it is so new. There are effectively no established multifamily assets in top-tier cities. Most of the existing assets available are value-add, conversion opportunities from offices, hotels or maybe retail which can be refurbished for rental apartment use. Prices have been high for this, although we expect the market to get softer and prices more realistic this year. We are now actively seeking these opportunities in key gateway cities.

The price of residential land is also often cited as a problem as pure residential – for-sale land is competitive among developers. But we believe there are land parcels that can be acquired at good prices and from which investors can enjoy very good returns. We target land with commercial title, which can be used as multifamily rental operations. Generally, we need the blessing of the government for this, but it is doable and – in Shanghai, for example – a commercial plot will be at discount to the price of a pure residential plot.

China SCE also does quite a lot of integrated projects across China and some of these will include a rental residential element alongside commercial and for-sale residential. So, the price allocated to the rental residential portion will not be the same as the other parts.
Human resources is a difficult area for operators because this sector is so new, and the residential market in China is so focused on developing for sale. Operators need to recruit very carefully and most of the time train personnel themselves in order to make sure they have the right skills in the business.

Can you talk through the mechanics of multifamily investing – the investors, the typical lot sizes, hold period and target returns?

We are targeting returns upward of 15 percent for rental apartment development investments. The asset sizes can vary but tend to be a bit larger than is typical in the US, where you would see a sweet spot from 200 to 600 units. We would normally choose 400 to 1,000 unit projects, but would also go higher than this. For larger projects with more than 1,000 units, there is an economy of scale, but we also consider the overall leasing schedule as it would take a longer time to become leased up and operationally stable, and to see its effect on returns.

Our first investment partnership has been with Gaw Capital Partners, with a total of $800 million of capital committed when we signed the deal in 2018. We have also been in talks with large institutional investors that are interested in the potential for this sector.

China SCE is in this business for the long term, and so happy to hold assets for the very long term. Having said that, as the multifamily residential business matures across China there could be opportunities to realize value, so we will look at options from time to time. We want to be able to demonstrate performance for investors, but we also see a huge amount of value that can be generated from creation of a portfolio of assets in major cities.

Today, the bulk of the opportunities are in the top-tier cities, primarily Beijing and Shanghai, because of the number of migrants they attract from all over China. We are also looking at top second-tier cities like Hangzhou, because it is the home of Alibaba and therefore attracts a host of tech companies and migrant workers.

However, migration is not limited to the top-tier cities. Other cities are attracting migrants. For some migrants and companies, Beijing and Shanghai are too expensive, so they look for alternatives. For example, a young graduate from a smaller city in the eastern Chinese province of Anhui might choose to move to the regional capital Hefei, rather than Shanghai. Often these smaller cities offer a good quality of living, which is attractive, and are often associated with particular business lines, like automotive or electronic appliances. So we expect to see at least four to six second-tier cities emerge as strong markets for multifamily. Nonetheless, as the sector is so new in China, investors are keen to focus on the first-tier cities initially.

Just as an example, we manage the rental apartment portion of a China SCE mixed-use project in Quanzhou, a third-tier city in Fujian Province. Rents are relatively low compared with first-tier cities, of course, but we have 90 percent-plus occupancy and it works very well. It is right in the center of the city and is very popular with tenants. There is a lot of potential for rental apartments in second-tier cities but it will take time, especially for investors to get comfortable with the idea. 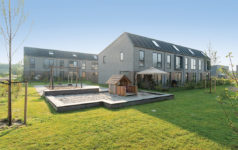 UBS: Amid uncertainty, residential is still proving its worth