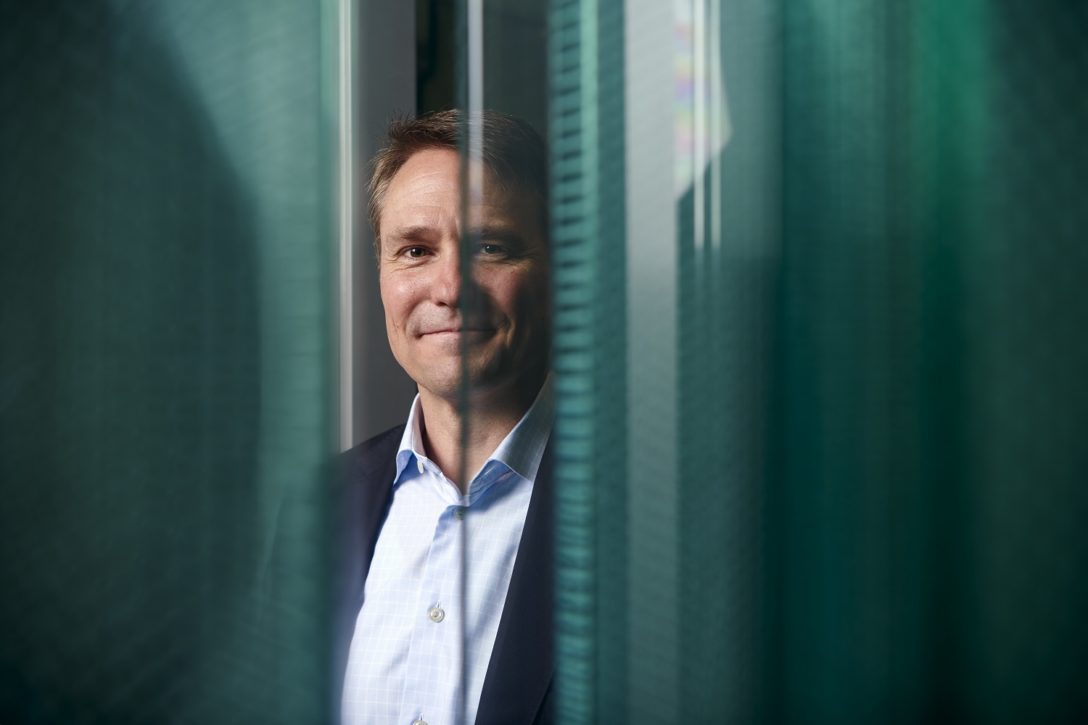 Asked for his dream travel destination, John Graham opts for the Galapagos Islands. It tells you a lot about his roots as someone who fell in love with science at a young age and spent almost a decade as a research scientist at US business services firm Xerox after gaining a PhD in physical chemistry. The Galapagos was where Darwin took inspiration for his theory of natural selection. For those with a background like Graham’s, it’s a kind of holy grail.

The second question was not hard to conjure: how did Graham advance from his initial career choice to a position in the portfolio design group at the Canada Pension Plan Investment Board, which he joined about 12 years ago? “I pursued a science career and really enjoyed working as an industrial scientist,” reflects Graham. “It seems appropriate to view that as a stark shift but actually I think it was somewhat gradual because what I was brought in to do at CPPIB was somewhat quantitative, very analytical and involved a lot of problem solving – all skills I had developed in my prior career.”

The portfolio design group went through various iterations before becoming the total portfolio management unit which, according to CPPIB’s website, aims to “ensure investing activities collectively produce a total portfolio that maximizes long-term returns without taking undue risk”. It wasn’t long before Graham switched from that broader role to become part of the pension’s fledgling push into credit. From a standing start when he joined the private debt group, credit assets under management rose to
C$36.6 billion ($27.6 billion; €24.8 billion) at the end of the firm’s fiscal year in March 2019.

Eyes on the east

In his latest role, at the forefront of CPPIB’s credit team, he describes expanding further into Asia-Pacific as a “high priority.” Sat in the firm’s London office in the leafy environs of Portman Square, Graham has just flown in from Hong Kong – CPPIB’s base in Asia-Pacific, from where the plan to exploit opportunities in China, in particular, is being hatched. So why is the region now at the forefront of CPPIB’s thoughts?

“We really need to be a global investor,” says Graham. “We need to have the capabilities, the infrastructure and the relationships to invest around the world, and building out our business in Asia is about building a long-term, sustainable business. It’s not about deploying money tomorrow, it’s about creating something for the next 10 or 20 years.”

He says the organization has concluded, given impressive growth rates in Asia-Pacific and the increasing importance of countries in the region to the global economy, that it is imperative to commit there in a meaningful way. “We’ve been doing a lot of research work over the past year trying to understand which markets are accessible and how to build a credit business there most effectively. Bringing together the different credit functions has really allowed us to be nimbler in doing that.”

Currently, Asia-Pacific plays a relatively modest role in CPPIB’s global credit operation. At the end of March, around two-thirds of its portfolio was based in the Americas, with 20 percent or so in Europe and the rest (around 10-15 percent) in Asia-Pacific. In terms of headcount – where CPPIB’s total number of credit professionals around the world is 94 – the breakdown is similar.

Graham, who spends around three months of the year in Asia-Pacific and another three in Europe, expects this balance to change. At a time when many markets in the region are suffering from the US-China trade war – with some cutting interest rates to try to provide a stimulus – Graham is an optimist. He is also confident that CPPIB can identify opportunity in a region where private credit has struggled to establish itself. Of the more than $80 billion raised globally by private debt funds in the first half of this year, less than $1.5 billion was collected by those with an Asia-Pacific focus, according to PDI data.

“The markets are continuing to develop and I would say, having spent several months there, that I think they’re more sophisticated than many people give them credit for when sitting in New York or London. There are some very interesting opportunities.”

CPPIB has set its sights primarily on China and India, though it also takes a keen interest in Australia. It’s a step-by-step approach. “Firstly, we’re very focused on China and then we’ll focus on India, recognizing that they’re very different markets and very different approaches will be required.”

So where exactly is CPPIB seeing opportunities in those two giant but challenging markets? “In China, we see an opportunity in the hard currency or offshore bond market and – at some point in the near future – the onshore bond market, and we are looking at several opportunities in hard asset-backed lending. In India you can probably think of 20 different sub-asset classes but we will be prioritizing the offshore and onshore bond markets, which are accessible to foreign investors, and looking for potential partners to get into some of the special situations within the country. As an institution we have very good relationships with other institutions in different geographies and we really think we can leverage them.”

Arguably one of CPPIB’s advantages is a broad product suite. This means the chances of it finding an opportunity that falls within its area of expertise are greater than for firms focused on a single strategy, such as direct lending or distressed debt. The organisation has six specializations within credit investments: Americas leveraged finance; Americas structured credit finance (financial institutions and bank portfolios); real assets credit (real estate, energy/resources and infrastructure); European credit; Asia-Pacific credit; and public credit.

The reason for creating the credit investments group was to increase collaboration across these different functions and fill any gaps. This, Graham insists, is particularly important when it comes to developing markets. “It’s where we see the greatest benefits of having everyone together because the credit markets aren’t as large as they are in the US and Europe and the distinction between real estate, asset-backed lending and corporate lending is not as distinct.”

The strategy is mainly focused around direct investing, although it does selectively support funds as well. These fund investments allow CPPIB to gain access to geographies or strategies where it does not have the internal capabilities or experience to invest itself. Perhaps the prime example of this was its acquisition of Chicago-based fund manager Antares Capital in August 2015. Describing the rationale, Graham says: “We had been interested in the US middle market for years and had written a strategy paper on it years before the acquisition, in which we concluded that it was an interesting market, but not one that we could access directly because of the depth of existing relationships and the resource requirements for effectively covering the market. When GE brought Antares to market we had done all our homework and knew this was a market we wanted to be in.”

Antares chief executive Dave Brackett says more than a dozen different parties were interested in purchasing the firm during the sale process GE Capital ran four years ago. The suitors included banks, asset managers, pension funds and endowments. At acquisition, Antares managed $16 billion in assets, but the figure has since risen to
$26 billion. “CPPIB found success by leaning into changing market conditions,” says Brackett. “Canadian pensions are widely held in high regard. We’ve benefited highly from the sterling reputation they have.”

Graham, who sits on the Antares board, says it has been run as a separate company that is like “a completion strategy to our internal capabilities that has played out as we had hoped. It also gives us a lot of additional collaboration benefits.” Pressed on the latter, Graham says he is referring to CPPIB’s direct platform occasionally partnering with Antares on unitranche-type deals.

Antares is not the only fund that CPPIB has been involved with. In the US, the pension has an ownership position in LoanCore Capital Markets, a mid-market real estate lender. In July last year, CPPIB participated in A$500 million of seed funding for Australian fund manager Challenger Investment Partners, an investor in mid-market real estate loans in Australia and New Zealand. Plus, in 2015, the pension committed $100 million to Moneda Asset Management, a debt fund manager based in Chile. Graham says CPPIB has also backed other funds focused on China real estate, China special opportunities and broader Asian special opportunities.

He acknowledges, however, that the fund strategy is not as far-reaching as within private equity – an asset class where he says making fund commitments is a “key component of the strategy”. Having said that, he points to a relationship between the private equity fund strategy and private debt that is not immediately obvious: “Through our leveraged finance business in North America and Europe, we have very strong relationships with our private equity GPs as they are a source of dealflow, so we benefit in that way from our private equity fund investing. Moreover, we also provide financing into a lot of sponsor-backed acquisitions, recapitalizations and leveraged buyouts.”

Although CPPIB does not have a fixed target allocation for private credit within its portfolio, performance so far suggests its position on the priority list will not be downgraded any time soon. The strategy has achieved five-year returns net of expenses of 11.8 percent. It has also outperformed its passive alternatives benchmarks such as the leveraged loan index, high-yield bond index, investment-grade bond index and emerging market bond index. It has added C$3.4 billion in excess of these benchmarks over the last five years.

But the question is whether everyone’s returns will be threatened by market conditions that appear to be worsening, in some parts of the market at least. “Every week that goes by there’s probably at least one article in the press about what’s happening in the leveraged finance markets and it’s certainly observable that pricing continues to get tighter in the corporate space and documentation standards, including in relation to covenants, continue to weaken.

“We still see opportunities in the corporate space but I’d say we’re very selective there right now and, coming back to the breadth of our mandate, we’re pretty constructive on real estate lending and we continue to see good deals there as well as in areas such as US financials, structured credit and US consumer loans. The broad mandate allows us to find good relative value.”

For someone with little time on his hands, Graham says being asked about hobbies is the toughest question to answer. Back home in Canada, most of his spare time is spent exploring the great outdoors with hiking, water sports and skiing among his favorite pursuits. These give him plenty of thinking time, no doubt, as he ponders where next to lead CPPIB’s credit charge.