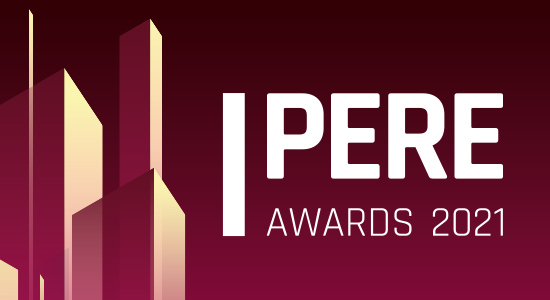 And the PERE Global Award goes to…
The wait is over and the winners of the 16th annual PERE Global Awards have been announced. Today, PERE readers learn which managers, investors, advisers and individuals won across the 69 reader-voted categories and the editorially chosen Lifetime Achievement Award. Despite recent increased institutional appetite for specialist strategies, breadth over depth prevailed in the global categories, none more so than New York heavyweight generalists Blackstone and Starwood, who collected four wins apiece. The former dominated the North America categories too, collecting another four awards, while the latter prevailed in Europe with a further five. Asia was led by fellow US private equity firm Warburg Pincus, thanks in part to its efforts collecting ‘new economy assets’ in the region. The awards yielded its first ESG and proptech category winners, too. See all winners and read our analysis here.

The Russian real estate effect
As stock and energy markets remain volatile amid Russia’s invasion of Ukraine, institutional investors continue to wait for visibility on what the denominator effect will do to their portfolios. Meanwhile, some groups are divesting from Russia in response to the country’s acts of aggression. Norges Bank Investment Management has already decided to remove around $2.83 billion in Russian assets from its $1.3 trillion portfolio. Inflation, already an issue of heightened concern pre-conflict, may be exacerbated, Ronald Dickerman, president of Madison International Realty, told PERE, as the Federal Reserve may not have room to raise interest rates as much as predicted to counter the threat. “They may not be quite as aggressive,” he said.

A home for homes
Blackstone sees a long runway in the US subsidized apartment market. Last week, the mega-manager launched April Housing, a portfolio company that will manage its 90,000-plus affordable housing units. The New York-based firm amassed most of April Housing’s seed portfolio through its $96 billion BREIT vehicle. The biggest chunk came via a $5.1 billion acquisition from the American International Group last year [see our coverage here]. That deal netted 83,000 units alone. The rest came from a series of purchases from Los Angeles-based Cornerstone Group. Alice Carr [her LinkedIn here], the former head of community development banking at JPMorgan Chase, will lead the company, which will focus on apartments financed with low-income housing tax credits. Blackstone has pledged to put $500 million into improving assets within the platform over the next decade.

Befim up in Europe
Brookfield’s takeover of listed European office companies continues with its bid to acquire Belgian real estate investment trust Befimmo for €1.35 billion. Based in Brussels, Befimmo owns an office portfolio worth €2.7 billion and comprising more than 60 properties – including office buildings, meeting centers and coworking spaces – totaling 10 million square feet of space across Belgium and Luxembourg. “Befimmo has built a high-quality irreplaceable office portfolio in attractive European markets,” said Brad Hyler, head of European real estate at Brookfield, in the deal announcement. No stranger to real estate take-privates in Europe, the Toronto-based mega-manager closed on the €3.5 billion acquisition of alstria, Germany’s largest public office REIT, in January.

Circle of life (sciences)
As more and more real estate investors look to take advantage of the capital flowing into life sciences, Ivanhoé Cambridge and Lendlease have partnered to develop and convert properties in up-and-coming markets. The real estate investment arm of Caisse de dépôt et placement du Québec sees an opportunity to enter relatively nascent markets such as Philadelphia and Chicago, while also adding to its portfolio in major US life science hubs, namely San Francisco, San Diego and Boston. The programmatic partnership is set to deploy $500 million of equity primarily in development opportunities. Read more about their strategy here.

Getting with the program
Real estate technology-focused venture capital firm Camber Creek‘s latest fund close is another demonstration of the exponential growth of the proptech capital markets. With a final close of $325 million, Camber Creek Fund IV is double the size of its predecessor, Camber Creek Fund III, which raised $155 million. Fund IV brings the 11-year-old venture capital firm’s assets under management to more than $500 million. Camber Creek’s VC peers, such as Australia’s Taronga Ventures and the US’s Fifth Wall, have also seen strong interest from institutional investors for their latest funds, with rising interest in ESG-related innovations being a top motivator. With that in mind, one can expect both the number and size of the proptech funds to increase for the foreseeable future.

A more direct approach
The biggest US real estate pension has a new top investment professional. The California Public Employees’ Retirement System has tapped Nicole Musicco [her LinkedIn here] to be its new chief investment officer. She replaces Ben Meng, who left the pension in 2020 amid a swirl of controversy over his personal investments. Musicco helped establish the direct investing program at the Canadian pension investor Investment Management Corporation of Ontario before becoming a partner at the private equity firm RedBird Capital. She is reportedly eyeing a similar shift at CalPERS, including a greater focus on real estate and real assets [see the Wall Street Journal’s coverage here].

An expanding partnership
California-based multifamily specialist Fairfield Residential has added another institutional investor to its ongoing partnership with the California State Teachers’ Retirement System. An overseas sovereign wealth fund has joined the pair for its latest $510 million development venture [see the press release here]. Trey Stafford, head of capital markets at Fairfield, declined to name the group, but said the venture marked the institution’s first investment targeting ground-up development in the US multifamily market. The JV will focus on garden style apartments in growing suburbs throughout the country.

Local money
Tishman Speyer is partnering with two foundations and an endowment for a sweeping redevelopment of a former steel-mill site in Pittsburgh. The New York-based owner, operator and developer is joining forces with the Richard King Mellon Foundation, the Heinz Endowments and Claude Worthington Benedum Foundation to turn a 178-acre brownfield site in the city into an “innovation hub” for research in development in robotics, artificial intelligence and life sciences. The three institutions are all based in Pittsburgh.