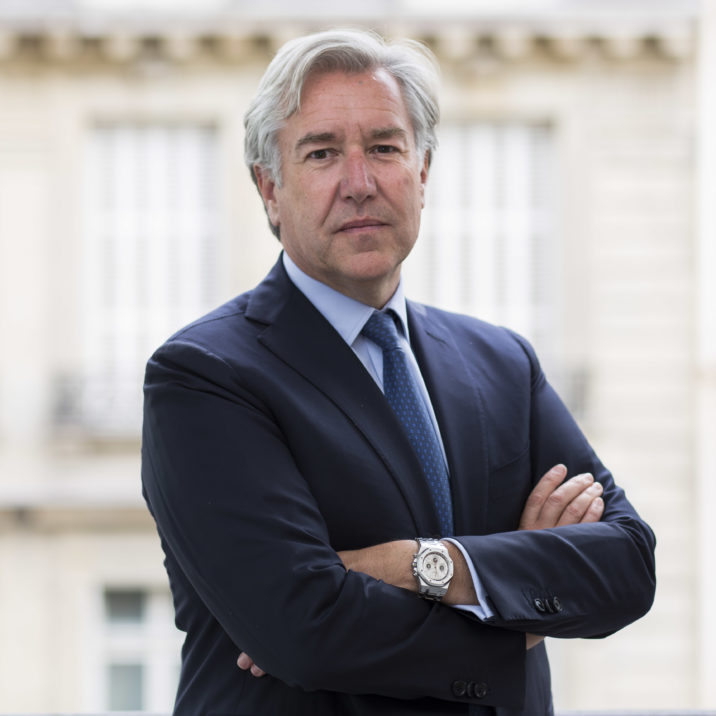 BC Partners is little known in real estate circles. In private equity, on the other hand, it is a marquee manager. In PERE’s sister title PEI’s annual manager ranking, the PEI 300, the London-headquartered firm ranked 26th after fundraising $13.3 billion from institutional investors in the last five years, as per the ranking’s methodology.

If BC Partners had achieved that for real estate strategies in the last five years, it would be ranked fifth in the latest iteration of PERE’s own manager ranking, the PERE 100. Lodged between Miami-based private equity real estate giant Starwood Capital and fellow private equity firm, Washington DC-based Carlyle, in this scenario, it would be one of institutional capital’s top picks for bricks and mortar investing.

Stéphane Theuriau would see such a fiction become a reality. The European real estate veteran of 30 years, who previously held leadership positions at the real estate unit of Wall Street investment bank Morgan Stanley and the listed French developer Altarea Cogedim, was appointed last May with the singular task of growing the private equity heavyweight into a private real estate contender, too. He has a plan to achieve this. “The right way to build a franchise is to effectively give investors everything they need in the space,” he tells PERE at BC Partners Real Estate’s first office on rue La Boétie in Paris’s upmarket eighth arrondissement, in his first official interview since taking the job.

Since his arrival, the 54-year old Frenchman has been filling seats. Including Atarea Cogedim lieutenants Laurian Douin and Thibault Laupretre, who have managing director roles, BC Partners Real Estate has expanded to an 11-strong headcount since Theuriau’s arrival. There are principals operating in London and Hamburg, development and fund executives as well as associates and analysts. That is plenty of manpower already for a platform yet to invest a single euro.

Investments are coming, insists Theuriau. “We’re working on that,” he says. “I would like to be in a position to deploy at least €500 million a year. That’s the objective.” It will happen via a number of strategies, he explains. Theuriau is prohibited from discussing fundraising plans, but PERE is aware a marketing campaign for BC Partners’ first closed-end, commingled fund has been underway since the first quarter and a first closing is expected to happen sometime in the third quarter. It will carry a value-add strategy, which generally targets an internal rate of return of approximately 15 percent and a 1.5x equity multiple, oftentimes achieved by repositioning assets, either at the asset or occupational level, and with the use of moderate financing.

That vehicle could be followed by a permanent capital offering, an open-end fund or private REIT, able to meet institutional liabilities. Separate accounts are also slated to feature, and a credit vehicle is planned as well. In private equity, BC Partners already manages some of the world’s most sophisticated institutional money in the world. Among the backers of its most recent flagship buyout fund, the €7 billion BC European Capital X, for instance, are: Canadian pension heavyweight Canada Pension Plan Investment Board, US pension California State Teachers’ Retirement System and sovereign wealth funds Korean Investment Corporation and Kuwait Investment Authority.

Theuriau believes, for real estate, investors like these need to be serviced in a variety of ways: conviction strategies for higher-risk and reward strategies and liability-matching strategies designed for longer-holding investors. He thinks the two kinds of strategies should sit symbiotically: “If you don’t have one piece, my sense is you’re not credible with the other piece.”

Credibility is, understandably, high on the agenda for Theuriau and his employer. BC Partners is entering the property market at a cycle high point that has lingered on for years now. Protracted low interest rates, provoked by anemic growth, have seen property markets besieged with institutional demand for fixed-income surrogates. That, coupled with occupational disruption across the property asset classes, is effectively eliminating most beta-plays in the sector and placing a greater emphasis on value-added concepts.

In Europe, the best performing managers have queues for their funds and are often oversubscribed (see table). In that sense, BC Partners’ market arrival via a value-add specialist like Theuriau might be well timed. Indeed, managers led by seasoned professionals able to port strong track records are receiving backing. Henderson Park, the London-based manager of former Goldman Sachs and Mount Kellett executive Nick Weber, is a case in point. Without chalking a single exit, the firm corralled almost $3 billion for its debut fund, Henderson Park Real Estate Fund I, including $2.2 billion for the first deal – the biggest maiden fundraise in Europe. Among the reasons cited by investors for backing that fund was Weber’s clearly traceable track record, which was transferred with the blessing of Mount Kellett boss Mark McGoldrick.

Theuriau says his own former boss, Altarea’s chairman Alain Taravella, has likewise given him his blessing to port the performance of the €600 million AltaFund, a 2013-vintage value-add office fund that he ran at the developer, to serve BC Partners’ purposes. “He’s authorized me to use the track record,” he says. Having seen the vehicle through to being 75 percent liquidated, Theuriau was permitted to inherit the “intellectual ownership” of a fund currently generating gross returns above 25 percent, net returns of about 20 percent, and a 2x equity multipleinvestments used gearing no higher than 50 percent.

BC Partners at a glance

“That’s hugely helpful,” comments Anthony Biddulph, chief executive officer at Capra Global Partners, a London-based private real estate capital advisory firm. “If you can persuade investors that the team you’re proposing is effectively the same team responsible for that track record, there’s very little difference between that and offering a follow-on fund from the same shop.”

Also helpful could be BC Partners Real Estate’s first assignment: an asset management mandate in Luxembourg, away from the Parisian offices where Theuriau and his team have built a track record of late. The firm was understood to have been picked to manage Place de L’Etoile, a large, mixed-use development site in Luxembourg City – notably ahead of high-profile developer-fund managers Hines, Tishman Speyer and Lend Lease – by private real estate’s biggest investor by market exposure, sovereign wealth fund Abu Dhabi Investment Authority. The site was originally approved for a shopping mall, but ADIA is understood to be evaluating its conversion into a mixed-use scheme. “We want our clients to see us as a service business with the competence to help them solve a real estate issue they have,” outlines Theuriau.

Jim Garman, who jointly runs investment bank Goldman Sachs’ real estate investing business in Europe, says BC Partners’ ability to convince investors of its capabilities outside of Paris offices, will play an important part in realizing its pan-European ambitions. “I do think Stéphane, Laurian and their team are excellent people to work with; trustworthy, reliable, constructive and creative. Their domain expertise has been Paris for the last ten years. Investors will be watching to see how they take their experience to a broader market.”

Altarea Cogedim’s fund and Goldman Sachs partnered on the redevelopment of the Pascal Towers in Paris-La Défense, a project that required the revitalization of almost 700,000 square feet across two buildings at a cost of about €200 million in equity, split equally between the two partners. “They’ve been creative in terms of adding value to the asset; our teams have worked really well together and have been able to increase the amount of square feet available materially.” Consequently, the asset is currently projecting an IRR north of 20 percent.

Garman praises the work done on Pascal Towers, describing the scheme as “complicated” and subject to “lots of capex.” By Theuriau’s reckoning, such assets should be a prime focus for value-add capital these days. “This is not a business about buying low and selling high. We’re going to get no help from interest rates or cap rate compression going forward.” Instead, repositioning assets is going to be a major pathway to realizing value, he says, particularly in the office sector.

Labelling today’s workplaces as too commoditized, Theuriau is passionate in his belief that many offices are not suitable for today’s occupational demands. Added to that, many landlords, particularly those listed on exchanges, lack the capital to modernize their assets. “The office industry is one of the very few which has become obsessed with offering exactly the same as the competition. All the products are the same; the industry too focused on the cycle.”

“If you compound that with the fact 15-20 percent of classic office jobs will be destroyed in the next 10-15 years, we’re looking at a very bad picture.” Theuriau is focused on place-making, where occupiers have a holistic working experience and landlords will achieve the optimal square foot-per-person ratios – it would be safe to bet a considerable amount of capital BC Partners raises will be funnelled in this direction. He also believes being part of a PE-business with access to CEOs whose own businesses he would notionally seek to accommodate can only be a resource to tap, a differentiator from BC Partners’ non-private equity rivals. “We back retail companies, financial institutions, tech companies. All of that, when making decisions, will be helpful. Of course we need to convince investors on our own merits. But, frankly, I think it’s very helpful at a time when everything is changing, to be part of a broader organization.”

Karim Habra, head of Europe at Ivanhoe Cambridge, the real estate business of La Caisse de dépôt et placement du Québec, agrees with BC Partners’ investment strategy. “We think the Paris proposition is great and like the repositioning and restructuring of assets there, especially offices.” Ivanhoe Cambridge backed another manager, Icamap, which is also keen to redevelop Paris offices via a €750 million joint venture, in February. By its structure, that venture offers the manager less discretion than the kind of funds BC Partners typically runs. “This is a vehicle in which we’re going to be very hands-on. We’re not into putting in passive tickets and waiting for things to happen,” Habra says. But he admits: “We’re certainly invested in [BC Partners’] idea.”

In the first instance, BC Partners’ debut offerings are likely to appeal to investors that are keen to piggyback its expertise as opposed to running alongside. “All the investors I meet want more exposure to real estate,” Theuriau says. “They want real estate yield, ultimately, and on a big premium versus gilts. It’s just many cannot get it.” BC Partners is hoping the very same investors see it as potentially more than just a private equity business, and its fledgling real estate arm as more than a Paris office expert. Theuriau says residential in its various forms will feature in the strategy too. He points to his time leading Morgan Stanley’s European real estate operation in the early 2000s as proof of his acumen across the continent. Whether investors buy that will be seen in the months to come.

If they do, it will not be long before BC Partners is well known in real estate circles, as it is in private equity, and it has a fuller office to show for it.