Logistics has grown to become one of the favored asset classes for investors on the back of its defensive attributes and the underlying e-commerce demand. And there was no one better suited than the industry heavyweight GLP to demonstrate this trend in Asia last year. Within a span of a few months, the firm successfully raised meaningful capital from two of the region’s biggest institutional investors, namely China Life Insurance and GIC Private, an unparalleled feat by many counts.

The firm made its first foray into the value-add-focused logistics strategy in China by setting up GLP-China Value-Add Venture I with China Life Insurance. The vehicle, with $1.6 billion in equity, was quickly followed by the launch of a $2 billion GLP-China Value-Add Venture II in partnership with the Singaporean state investor GIC. The firm also jumped on the India logistics bandwagon by setting up a partnership with IndoSpace, with ambitions of creating a $20 billion portfolio over time.

Meanwhile, it continued its capital recycling strategy in its other key Asia market, Japan and sold assets to its Japan REIT in two transactions totaling $1.04 billion.

Goodwin Gaw has led Gaw Capital, the investment manager he co-founded with brother Kenneth, to become one of the largest managers in the Asia-Pacific region, with $17 billion of assets under management. Headquartered in Hong Kong, the company has a global presence, with offices in London, San Francisco, Los Angeles, Seoul Tokyo and Shanghai, as well as a hospitality platform.

He is also an outspoken believer in China’s growth story; Gaw Capital has refurbished commercial assets, developed residential properties and set up a logistics joint venture among other investments in China.

The acquisition of a HK$23 billion ($2.9 billion; €2.6 billion) portfolio of shopping centers from Link Real Estate Investment Trust by a Gaw Capital Partners-led consortium was the biggest retail deal in Hong Kong’s history. The deal was announced in November 2017 and completed in February 2018. The portfolio covers 2.2 million square feet of neighborhood retail and includes 8,000 car parking spaces. In sealing the deal, Gaw Capital fought off competition from the likes of Blackstone Group and brought together a number of investors including Goldman Sachs.

The Link REIT portfolio, which has a number of small tenants and community uses, is likely to prove a politically challenging investment and Gaw Capital chairman Goodwin Gaw pledged to “adopt a visionary and creative approach to operate the malls, delivering quality service and refreshing them into modern community hubs for local residents.”

Gaw Capital has since expanded its interest in Hong Kong neighborhood retail with the purchase of a further 12 malls for a total of HK$12.01 billion. In the space of just over 12 months, the company has become one of Hong Kong’s biggest retail players.

GIC is one of the world’s largest real estate investors, with an estimated $24.08 billion of assets under management. It has also been one of the most innovative investors, an early mover in cross-border investing and in establishing partnerships with operators.

Last year, GIC established a $2 billion China fund with GLP. Logistics has been an important focus for GIC in recent years and in November it established a A$2 billion ($1.4 billion; €1.3 billion) unlisted trust with Dexus, which will invest in core logistics assets in Australia.
The sovereign fund also took a step into the new real estate economy, investing in a $177 million Asia-Pacific co-working platform alongside Frasers Property and JustCo. It also teamed up with NOVA, a Warburg Pincus-backed China investment manager to create a 4.3 billion yuan ($637 million; €560 million) Chinese rental housing platform. In August, GIC took a “significant minority” stake in Indian developer Provenance Land.

GIC has not been lax in adding assets to its portfolio; last year’s acquisitions include a 50:50 joint venture with CapitaLand to acquire a 50-story twin tower mixed use development project in Shanghai for 12.8 billion yuan.

The fund garnered investment from institutional blue chips such as the South Dakota Investment Council, which committed $300 million, the Illinois Municipal Retirement Fund and the Teachers’ Retirement System of the State of Illinois. Ivanhoé Cambridge, the real estate investment business of Canadian pension manager, Caisse de dépôt et placement du Québec, is also understood to have committed $300 million. Many of the investors had previously invested in BREP Asia I.

Blackstone now has unrivalled capacity to seek large deals in Asia and also has the cushion of a six-year investment period, allowing it to sit out a cyclical downswing. It has committed significant capital to India, where it is expected to launch the nation’s first real estate investment trust, China, Japan and Australia. It has also launched a number of take-private bids for listed real estate companies.

Successful foundation: M3 has enjoyed a long relationship with GLPM3 Capital Partners’ advisory relationship with logistics giant GLP has been one of the cornerstones of its success. The relationship with GLP’s management goes back as far as 1993, when M3 advised Security Capital Industrial Trust, which was renamed Prologis in 1998. GLP, in turn, grew out of Prologis’s Asian operations and M3 has supported the company continuously, advising on $27 billion of third-party equity raised. M3 opened its Hong Kong office in 2008, a year before the launch of GLP.

Last year, M3 acted as exclusive financial advisor to GLP in connection with the formation of GLP China Value-Add Venture I, the logistic specialist’s first China value-add fund, with total equity of $1.6 billion.

M3, in operation since 1991, has offices in London, Austin, Chicago, Hong Kong and Sao Paulo. In 2005, it launched Evergreen Investment Advisors, its principal investment business, which manages $5.2 billion of equity and has invested in 14 real estate operating vehicles.

GLP has grown to become a truly global business in recent years, but the heart of the company is in China. In 2018, the company continued to raise significant institutional capital for the country and break new ground with its investments.

The company last year established its first China value-add fund, with total equity of $1.6 billion raised from China Life, and launched a $2 billion fund with Singapore’s GIC Private. The company also demonstrated its commitment to innovation in logistics property, with the establishment of Hidden Hills, a 10 billion yuan ($1.6 billion; €1.3 billion) private equity fund, which will invest in tech solutions for the logistics business. In another first, GLP was given approval to issue up to 12 billon yuan of onshore ‘Belt and Road’ bonds on the Shenzhen Stock Exchange.

GLP is also at the forefront of sustainable real estate investment in China. Last year, it formed a 50:50 joint venture with Brookfield to create a platform for rooftop solar power generation, utilizing GLP’s 22 million square feet China logistics portfolio. The JV plans to install 300 megawatts of rooftop solar projects over the next three years.

In its first full year of Japanese ownership – it was bought by tech and finance conglomerate Softbank in 2017 – Fortress Investment Group maintained its strong track record in Japan. The firm raised $1.5 billion for Fortress Japan Opportunity Fund IV, hitting the hard-cap and garnering re-investment from more than 80 percent of the investors in FJOF III. It has hit the hard cap for all four of its Japan-focused funds to date.

Fortress’s FJOF series focuses on making investments in distressed and undermanaged properties throughout Japan with a recent emphasis on acquisitions from the Japanese federal and municipal governments and large corporations. Up to September 30, 2018, the funds had deployed total equity of ¥309 billion ($2.8 billion; €2.5 billion) in 69 investments in aggregate, representing 110 transactions, with an aggregate purchase price of approximately ¥595 billion.

The firm’s execution capabilities stem from its 41-strong team of professionals in Tokyo, with support from the Fortress offices in San Francisco and New York. Much of its success in Japan was down to veteran Tom Pulley who has since been made global chief investment officer.

ESR entered the Australian market with a bang last year, acquiring a business and plotting the launch

of its first fund there. ESR hired former Goodman Group executive Philip Pearce to head its Australian business in late 2017 and last year acquired Commercial & Industrial Property for A$102.5 million ($73 million; €64 million). CIP has a A$200 million annual development pipeline but this will be boosted to A$400-A$500 million under ESR’s ownership. ESR will focus initially on Sydney, Melbourne and Brisbane, with more opportunistic investments in Perth and Adelaide.

Talking to PERE last year, Pearce said ESR planned a A$500 million capital raise for its first Australian vehicle, alongside additional co-investment capital. It will most likely be a club-style vehicle with three to four investors. As well as its own Australian business, ESR acquired strategic stakes in two logistics companies, an 18.06 percent stake in Propertylink and a 14.9 percent stake in Centuria.

ESR was formed through the merger of e-Shang and Redwood in January 2016 and is backed by Warburg Pincus alongside investors such as APG, Goldman Sachs and PGGM. The group has $12 billion of assets under management.

Apollo Global Management ratcheted up its India real estate business last year with the acquisition of JP Morgan Asset Management’s real estate operations there. PERE reported in July that Apollo would take control of two private equity real estate funds previously managed by the US investment bank, comprising 15 investments and a staff of 10 people in India. According to PERE data, the two funds were the opportunistic vehicle JPMorgan India Property Fund that closed on $360 million in 2006 and its successor vehicle, the $155 million JPMorgan India Property Fund II.

Apollo’s Asia management team’s turnaround of the Trophy Property Development Fund in China is understood to have encouraged investors in the two JPMorgan funds to agree on the change in management. The firm’s rescue of the Chinese development fund, led by real estate veteran Philip Mintz, meant investors got three-quarters of their capital back. The group’s India real estate business has its roots in the acquisition of Citi Property Investors in 2010. It has subsequently made further real estate equity and debt investments in the country. Apollo’s real assets business has $18 billion of assets under management with the bulk of this – $13 billion – in debt investments.

The firm, which boasts one of the largest international funds and investment management teams in the legal world, opened its first office in the region in 1980 and now has eight offices in five countries, with 400 lawyers.

Clifford Chance has been involved with a huge range of real estate transactions around the Asia-Pacific region, including some of the largest deals in the market. It advised Goldman Sachs on the acquisition of a portfolio of 17 Hong Kong shopping centers from the Link REIT. This HK$23 billion ($2.9 billion; €2.6 billion) transaction was the largest retail property deal in Hong Kong history. Goldman Sachs was part of a consortium led by Gaw Capital Partners.

Clifford Chance also advised Ping An Real Estate Capital on its acquisition of three warehouses in Japan, investments which were part of the existing co-investment arrangements between Ping An and ESR.

Inevitably, a large proportion of the transactions in which the global law firm was involved must remain confidential. However it can be said that Clifford Chance advised sovereign funds, investment managers and institutional investors on transactions across the region. Clifford Chance has a 400-strong team of lawyers working in the Asia-Pacific region, across eight offices in five countries. 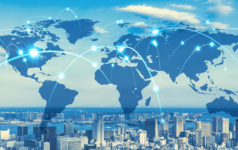