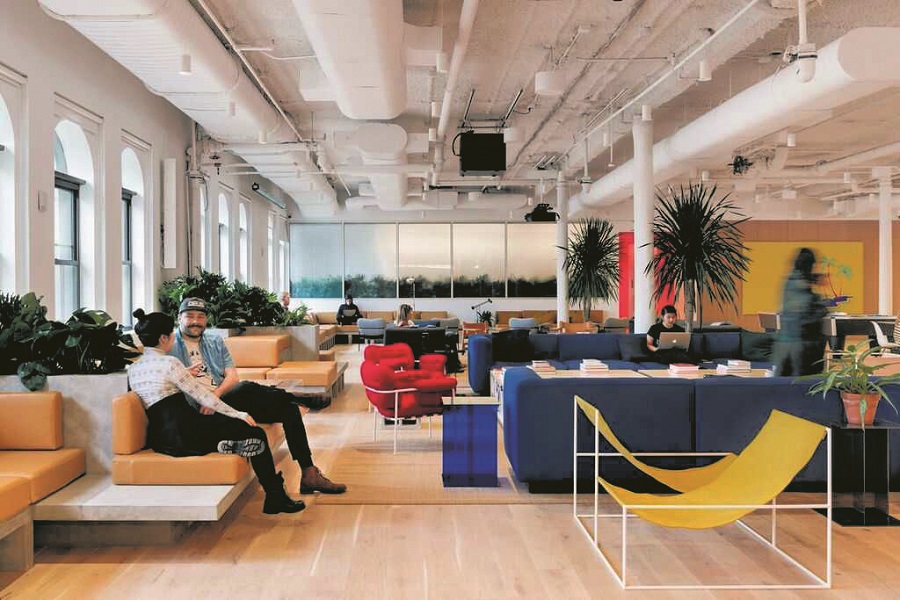 From its start in 2010, WeWork has had its believers and detractors. Few in the private real estate industry believed in its biggest reported $47 billion valuation, says Bill Tresham, the former president of Ivanhoé Cambridge and founder of real estate investment management firm RittenVest. But he says an IPO would not change landlords’ minds about WeWork as a tenant.

“I don’t think people in our business, real estate owners, ever really sign these leases with WeWork on the basis that they’re a ‘tech company,’ which is what got them this crazy valuation,” he says.

Moreover, by Tresham’s reckoning, the vast majority of landlords regard WeWork’s emergence and IPO as a net positive, according to Tresham. For them, the company provides a solution for a growing mismatch between landlords’ preference for long-term leases and tenants’ desire for shorter, flexible occupational arrangements.

As PERE went to press, WeWork’s IPO had been postponed to the end of the year after early marketing. It had chosen the Nasdaq to list its shares. But the prognosis for a successful flotation was becoming increasingly bleak, with its backer, the Japanese conglomerate Softbank, reportedly applying pressure to abandon it, and market appetite for the stock dissipating amid profitability and governance concerns. Indeed, days after marketing began, its $47 billion price tag had shrunk to the $20 billion mark, according to multiple reports. By press time, valuations cited in the media had dipped as low as $12 billion.

“It’s a little unfair because the concept is actually outstanding – it’s elevated the office world to a different level,” says Ralph Winter, who took his own firm CORESTATE public in 2006 and invests in real estate through his own family office, the W5 Group. Winter believes WeWork could have avoided the issues thrown up by its floatation marketing by adopting sounder strategic council earlier on.

“There are things you do five years prior to the IPO, not even considering the option of having your company go public,” he says. He believes WeWork should have floated sooner, well before its costs piled up and the venture capital funding provoked a $47 billion tag. Nevertheless, Winter thinks WeWork, minus its previous ambitious growth assumptions, could operate successfully as a scaled down business producing positive earnings.

Currently, on the basis it requires expansion capital from a well-executed public offering, WeWork’s strategy is challenged, Tresham says. Indeed, the co-working giant’s S-1 form and prior funding rounds have set a revenue multiple closer to many technology companies – traditionally higher than most other sectors – rather than, for instance, the original office-sharing company Regus, now known as IWG.

WeWork was, at one stage, valued at 26 times its 2018 revenue, according to reports. That valuation barely compared with IWG, valued currently at less than 4x revenue, or even Uber, which had an estimated 9x revenue multiple back when it was targeting a $100 billion valuation at its floatation in May.

For real estate and technology consultancy RethinkingRE founder Dror Poleg, a successful IPO would confirm his belief that WeWork is indeed not a tech company, but is also not a “Regus 2.0.” By his reckoning, it should be priced somewhere in between. He believes WeWork is primarily a real estate company, but that does not mean it should be underwritten like IWG, he says.

“You can compare the multiple of Nike to Macy’s or The Gap,” Poleg adds. “Technically, they’re in the same business, but the market looks very different for various reasons.” Notably, the two firms’ opening rates are different. IWG has grown to almost 3,300 locations over 40 years while WeWork has grown to 830 in just nine years – a function of its vast expansion costs. For New York-based BentallGreenOak president Sonny Kalsi, of most concern post-IPO effort will be how WeWork is funded. “The IPO could be pulled and WeWork could have to step back, reorganize and slow their growth,” Kalsi says. Like Winter, Kalsi thinks a re-based WeWork “could be the best thing to happen to them.”

Broadly speaking, the co-working firm’s IPO would be most useful in helping the industry re-evaluate its tolerance for WeWork exposure, PERE sources say. Not only landlords are considering this. Investors are too. For US pension Oregon State Treasury, for instance, assessing the post-IPO situation for WeWork will be key to making any strategy changes. Senior real estate investment officer Anthony Breault is optimistic a WeWork IPO will bring clarity to considerations regarding the business and wider shared office sector.

“In the context of our separately-managed account holdings, we view the IPO as a net positive as we expect it will improve market sentiment regarding WeWork’s business model and credit risk,” he tells PERE.

The pension has, to date, capped WeWork’s occupancy in a building it controls to 20-30 percent, Breault says, adding that, because Oregon’s separate account holdings skew towards long-term holds, it can be patient in evaluating WeWork’s evolution.

Kalsi agrees: though a floatation would not necessarily make WeWork more creditworthy, it would ensure underwriting is easier because US listings require firms to disclose more information, he says.

Hong Kong-based private real estate firm Phoenix Property Investors intends to continue leasing to WeWork, if terms are favorable, regardless of the IPO outcome. WeWork took space at Phoenix’s Tower 535 in Causeway Bay as its first location in the city in 2016.

“We selected WeWork as an anchor tenant irrespective of any potential IPO,” Chu tells PERE. “When we consider possible tenants, we first look at the commercial terms. We also take into consideration whether or not a tenant can provide any synergies to the overall building. I would look at this deal in the same way I did previously.”

Tresham says good underwriters should not be surprised by WeWork’s IPO, regardless of the outcome, insisting that any tenant risk should have been priced into any deal for an asset containing WeWork. Those that signed with WeWork should already be prepared to re-lease the space to another tenant and absorb a small financial hit if the re-letting occurs at a lower rent level.

“WeWork has always been known as someone who pays a very healthy rent and maybe if this happens in a bad moment in the market, you may be re-letting that space at a lower number,” he says. “But is it a lower number that crushes you? No.”

As PERE went to press, WeWork was addressing concerns regarding its operational and governance process in a bid to assuage its doubters. It has a natural deadline of the end of the year related to certain funding arrangements, and so remains motivated. If it happens, a world of landlords and prospective investment partners will be better able to underwrite the creditworthiness of one of real estate’s biggest disrupters. If it does not, the debate raging about its valuation will likely linger on.

WeWork: Path of a serial fundraiser