Among these shifts is the movement of manufacturing facilities out of the main hubs in China, to Southeast Asia and other new markets such as Ghana, Kenya and other sub-Saharan African countries.

The main drivers of these shifts are a rearrangement of supply chains in the wake of the covid-19 pandemic, geopolitical uncertainty and rising labor costs in China, as well as freight container rate spikes. Improved market frameworks, shifts in industrial development policies, and demographic changes like rapid urbanization and population growth are creating significant pull effects for the re-evaluation of locations that may be off the beaten path.

The latter two components of demographics and urbanization, along with market liberalization, are making the sub-Saharan Africa industrial and logistics markets increasingly attractive.

In addition, the establishment of the African Continental Free Trade Agreement (AfCFTA), which came into force on January 1, 2021, is widely expected to provide a major boost to trade and economic integration across the continent by tearing down tariffs and simplifying cross-border procedures and costs within the continent.

South Africa, as the highest-ranking African country, achieves a score of 3.38 (rank 33). Other major economies on the continent score significantly lower; for instance, Egypt at 2.82 (rank 67) and Nigeria at 2.53 (rank 110).

In order to improve that persistently low performance, a combination of hard asset modernization (ports, roads and rail lines) and soft asset upgrades (track and trace technology, digitized warehouses and port operations) are necessary. Most importantly, significant improvements of inefficient procedural arrangements to move goods between countries and regions will be required.

AfCFTA’s importance becomes even more obvious when considering Africa’s highly fragmented market landscape. The African Development Bank has predicted that AfCFTA would lead to a 90 percent tariff reduction, leading to regional trade enhancements between 15 percent and 25 percent in the medium term. However, this may be a pipe dream as more than 70 percent of African countries have populations of fewer than 30 million people and, correspondingly, there are a large number of relatively small economies.

Drilling down further reveals that the majority of intra-regional trade currently occurs within the Southern African Development Community. Implementing AfCFTA across the greater continent will take time, as its implementation and integration in national law and regulations will be the real driver for countries to harness its benefits. However, there is significant economic potential among trading partners and thus a high probability of rapid implementation. 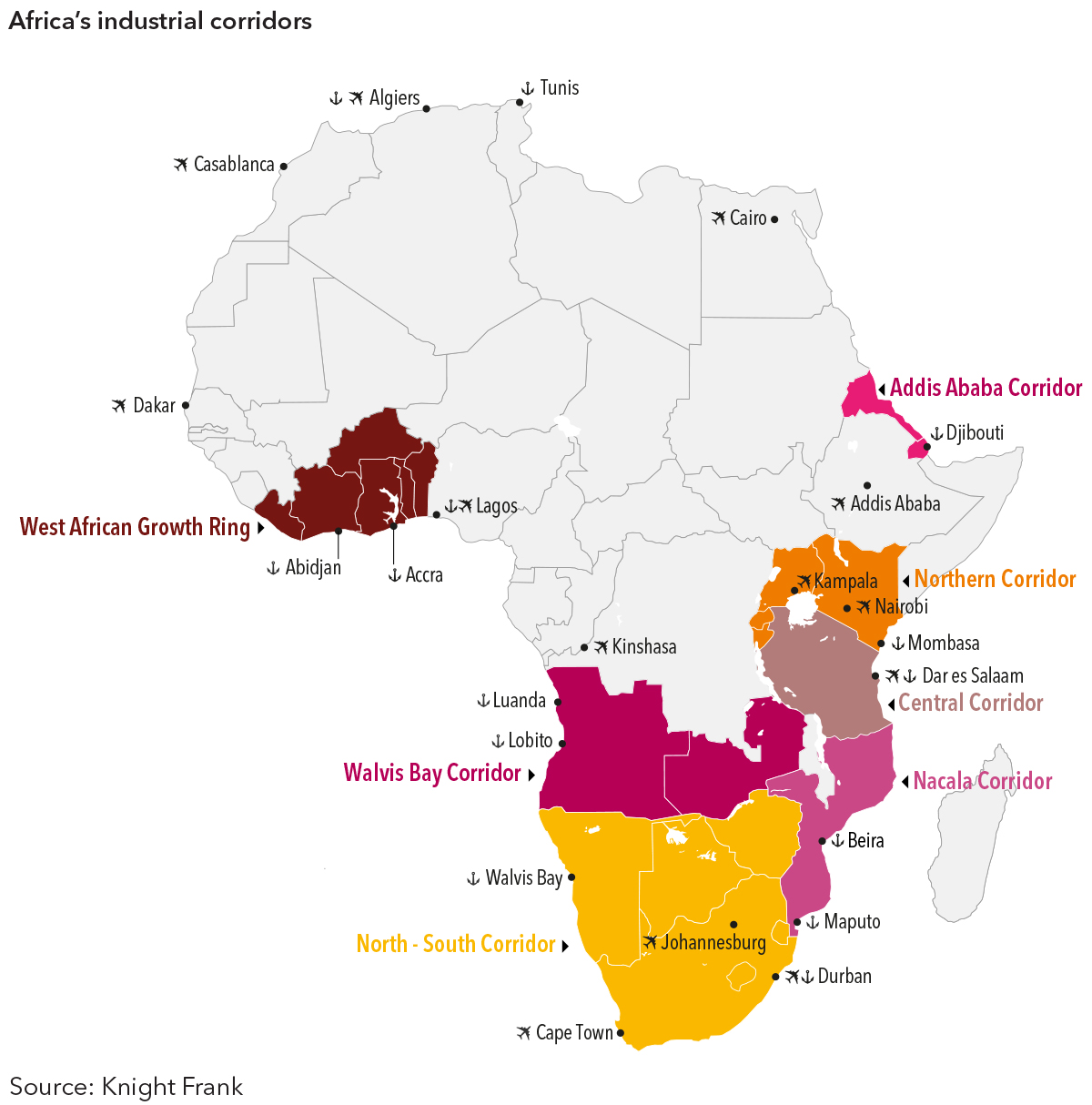 So, does this translate into logistics opportunities for private real estate capital providers? It depends. Africa’s urban population is set to almost triple over the next 30 years to 1.4 billion people, with most of the growth occurring in sub-Saharan Africa.

As demographic growth and urbanization drive productivity gains, manufacturing and innovation clusters are likely to emerge in megacities like Kinshasa, Lagos, Dar es Salaam, Luanda and Johannesburg. Johannesburg is likely to remain a key logistics submarket.

In addition, wealth and spending power expansions across a number of second-tier cities are expected to result in retail-driven logistics demand. According to research provider Euromonitor, cities including Nairobi, Abuja and Douala are expected to experience consumer expenditure growth between 130 percent and 200 percent by 2030, an additional total consumer expenditure between $5 billion and $18 billion.

In terms of the anticipated manufacturing growth driven by AfCFTA-induced regional trade and the manufacturing relocation opportunity discussed above, a helpful starting point is to consider existing regional industrial clusters. Sea-freight for both (intra-) African regional and global export trade is typically anchored by major ports accessible by rail. It is imperative for logistics investors to conduct in-depth connectivity, efficiency and risk analyses of related port and rail infrastructure, since there are often only limited transport alternatives available.

Important data points include the digitization drive for Nigerian ports, as well as significant M&A activity like the CDC Group’s recent joint venture with DP World to operate a key port portfolio in Northern and sub-Saharan Africa.

Apart from transport links, electricity availability and data connectivity are critical elements to keep in mind when evaluating potential acquisitions as well as, given limited land supply in most urban markets, development sites for greenfield investments.

Space requirements are on the rise across most of sub-Saharan Africa, with an overall 13 percent year-on-year increase, most of it driven by agriculture, fast-moving consumer goods and manufacturing occupiers.

Partnering with a reliable developer and/or operator on the ground is key to approaching this market, as is a realistic timeframe. As in the case of most other real estate investments across the continent, patient and flexible capital providers unencumbered by fund lifecycles stand the best chances of success. Given the often-patchy data available, creative demand analysis involving grassroots techniques can provide valuable additional insights to help de-risk logistics investments in the region.

Last but not least, there are ESG considerations, which in most cases exceed the potential typically seen in developed markets. As such, the sub-Saharan African logistics space provides almost unlimited potential for investors looking to marry healthy returns while contributing to incredibly young, dynamic and resilient societies.