This article is sponsored by Realterm.

Among all economic sectors, none has experienced deeper disruption as a result of the covid-19 pandemic than air travel. With passenger numbers collapsing, the booming air freight sector has become crucial to airlines seeking to defend their bottom line.

Supply chain real estate specialist Realterm has carved out a niche as one of the few established players in the air cargo market through its Aeroterm platform, which owns 15 million square feet of largely on-airport property at 36 airports, primarily in the US and Canada.

How has the pandemic affected the air freight sector?

It might sound somewhat counterintuitive, given the sharp economic contraction that took place, but demand for air freight actually soared during the pandemic. E-commerce really took off, and online shopping is a major driver of air cargo volume. However, demand shooting up did not immediately lead to an increase in volume.

Historically, about half of air cargo volume has been carried in the bellies of passenger aircraft. With passenger air traffic down by almost 95 percent at one point, that eliminated almost half of the capacity in the system. Meanwhile, with revenue from passengers virtually wiped out, carriers became much more dependent on cargo to forestall some of that revenue loss.

A lot of passenger aircraft were retrofitted for cargo. They literally took the seats out of the planes to make room. Even in the depths of the pandemic-induced recession, airlines’ air cargo revenue did not fall nearly as sharply as that from passenger traffic, and revenue from air cargo has sharply increased over the past year. The International Air Transport

Association is forecasting growth of 7 percent to 8 percent in 2021 over 2019, the last pre-covid year. Meanwhile, passenger revenue is still around 30 percent lower than it was before the pandemic.

How is air freight’s role in global supply chains evolving?

A shipper has multiple options for how they get their product to the consumer. Usually, the most cost-effective way is to put it on a container ship, for instance between Shanghai and Los Angeles, then offload it onto rail or truck. Typically, air cargo is reserved for high value products, and/or for products that are time-sensitive.

The surge in consumer demand that followed the lifting of lockdown restrictions has created bottlenecks in the shipping industry, with ships queuing to unload because there is no room left on the port. Consequently, some suppliers have shifted to moving their product by air, which has led to a surge in demand.

Bottlenecks do not usually occur in air cargo, because a trip usually takes a few hours rather than days or weeks, and schedules and equipment can be rearranged to accommodate a more efficient flow. However, because air cargo volumes have increased so much, so quickly, we are seeing a little of that congestion spreading to airports too.

During the summer and early fall of 2021, we saw very strong cargo demand growth. There was a dip between October and November, reportedly due to delays at handling facilities.

What do those trends mean for air cargo-related property investment?

Air cargo is an increasingly important element in airlines’ revenue models, and because of that air cargo terminals have become more valuable to them as a way of realizing that revenue. For landlords, that translates into an increased ability among tenants to pay higher rents to secure those properties, as well as a willingness to sign longer lease commitments and a greater propensity to renew leases when they expire.

Meanwhile, the growing congestion at air freight terminals highlights the need for more efficient cargo handling, which creates a need to build new properties or reconfigure existing ones. Many airport infrastructure proposals – to expand runways and taxiways, or improve passenger terminal facilities – were put on hold when the pandemic struck because the revenue stream was no longer there to support them. Government stimulus packages provided some relief on the revenue side through short-term loans and subsidies. But they did not fund infrastructure improvements.

In the US, the failure of the passing of the Build Back Better bill means that airports may be forced to divert funds from developing on-airport properties to more infrastructure-focused goals. That should mean an expanded role for third-party and private investment capital.

What opportunities for investment will be created?

Investment potential depends on three broad macro themes. The first is increasing demand. E-commerce will continue to be the major driver in both the US and Europe. It is expected to comprise about 20 percent to 25 percent of all retail sales in the US by the middle of the decade. Cargo facilities at international gateway airports like JFK in New York or LAX in Los Angeles have limited capacity for cargo growth within their existing terminal infrastructure. That creates opportunities for investing at secondary airports in the US.

Some freight may start to move through Philadelphia instead of New York, for example, before arriving at the same final destination. Secondary airports in fast-growing metropolitan areas like Austin, Las Vegas and Orlando will also require expanded capacity to serve consumer populations.

A second consideration is supply constraint. It is extremely difficult to build new real estate on an airport. To identify growth opportunities, developers have to work with airport authorities, which are usually run by municipalities, but also sometimes by states or private operators. A lot of the time, their objectives do not align well. Because of the scarcity of options for air freight tenants, landlords have more pricing power in setting rents than they would if occupiers had the ability to shop around. The higher rent growth that can be captured from that dynamic makes on-airport investment opportunities more attractive.

A third theme is the functionality of the existing cargo terminal stock. Much of it was built back in the 1960s and 1970s, at a time when cargo volume was much lower and not as time-sensitive, and it is poorly suited to the handling of equipment that is in use today. That creates opportunities to upgrade properties, for instance by increasing clear heights to accommodate automated cargo handling.

How can investors access the air cargo real estate market?

Capital has to be deployed through a fund that is able to operate in this market. For example, Realterm offers its Realterm Airport Logistics Properties (RALP) fund to access this market. We may see some investors that previously exited the sector return. In addition, given the attractive market fundamentals, I am sure there will likely be new funds proposed, especially as development becomes more of an attractive prospect.

High prices for core investments in the broader industrial sector at the moment, and exceptionally strong tenant demand, are making new construction a viable alternative to buying existing properties. There are likely to be infrastructure funds interested in on-airport investment opportunities, as well.

What are the challenges of investing in the sector?

On-airport properties are usually owned through a ground lease, typically 20 to 30 years in duration, so the term remaining on that ground lease is often a major determinant of the attractiveness of the investment.

Development is another way to invest in on-airport properties. Airport authorities rely on public sector financing, and so they rarely have sufficient capital to undertake the improvements they would like to see. They often need a private sector partner to accomplish their goals. An airport authority, often working together with an operator, will issue a request for proposals for a facility that they would like to see built. Developers bid for the project and, if selected, they then enter into negotiations to finalize the financial details.

This process can take years – far longer than what developers are used to in other settings. Investors must have a patient, long-term view to successfully invest in the air cargo real estate market. 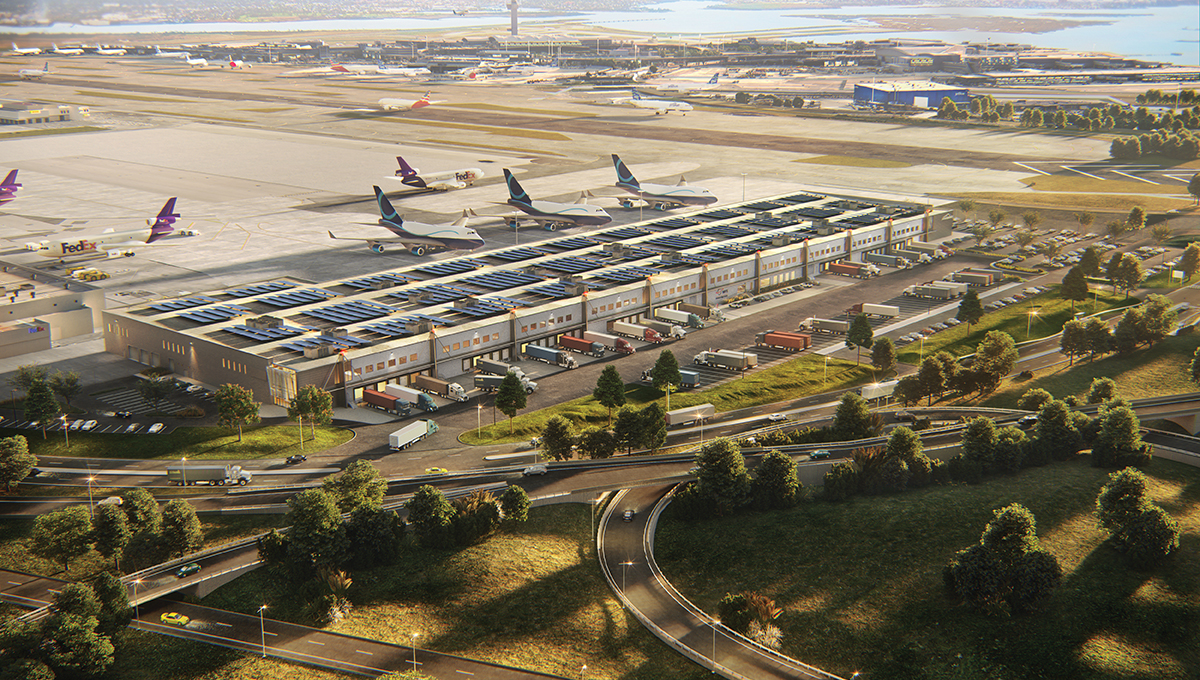 In June 2021, Aeroterm secured a long-term ground rent agreement to build a $145 million cargo center at New York’s JFK airport. Two obsolete buildings on the 26-acre site will be demolished to make way for the 350,000-square-foot project, which will be the first new cargo facility at the airport in 20 years. “It is the kind of high-clear-height property that can accommodate much higher throughput, increasing capacity at a very constrained airport and providing a release valve for some of the intense pressure on air cargo,” says Kane. Construction began in September 2021 and is expected to be completed by the end of 2023.