Developing real estate assets is becoming a riskier undertaking than ever, thanks to
an unabating rise in construction costs.

CBRE’s 2022 US Construction Costs report found that construction costs increased 11.5 percent in 2021, significantly above the 2-4 percent historical trend. That surge is on track to continue this year, with costs projected to rise 14.1 percent by the end of 2022.

The report predicted price surges in some commercial real estate sectors, such as hospitality, which is forecast to experience -0.4 percent cost growth in 2022 but see costs soar by 13.5 percent in 2023.

Rising construction costs have already plagued the private real estate industry for more than a year, thanks to construction labor shortages and supply-chain issues arising from the pandemic.

While those challenges have worsened because of lockdowns in China and the Russia-Ukraine conflict, construction cost increases, meanwhile, have been further exacerbated by energy price increases and higher costs of debt.

The biggest driver of costs has come on the energy side, with natural gas and unprocessed energy materials both experiencing over 126 percent price increases, in large part due to the macro environment. Energy costs in turn drive up transport costs for construction materials, which have a low value-to-weight ratio, according to a report from Oxford Economics.

The other new factor driving up construction costs is more expensive debt as central banks continue to raise rates to combat historic inflation. The US Federal Reserve instituted a 75 basis-point increase to its federal funds rate in both June and July, the highest single increases since 1994. Meanwhile, in July, the European Central Bank raised interest rates for the first time since 2011 by a larger-than-expected half a percentage point.

High construction costs have had a dampening effect on development-related investments. Managers are pivoting to acquisitions in lieu of development, says Josh Patinkin, managing director of US real estate at alternative investments manager Leste Group.

“A lot of investors are very skittish around taking development risks, and there’s just a lot of project management and experience necessary to make these investments work,” Patinkin says. “Institutions tend to shy away from it unless they feel very confident in the team they’ve put around it.”

On the debt side, the moving target of additional rate hikes could make it even more difficult to execute development deals going forward. Construction loans trading at the beginning of the year would have had an average of 10 percent more loan-to-value in a deal and have traded at between 100 basis points and 300bps lower relative to the Secured Overnight Financing Rate than loans currently. Less leverage in a transaction can stop a deal from going ahead.

“No one wants to do a deal at 50 percent of cost in terms of borrowing because no development deal will ever work like that,” says Josh Zegen, managing principal and co-founder of Madison Realty Capital, a New York-based manager that provides equity and debt to development projects.

With higher costs posing greater risk for lenders and other capital providers, “there’s a lot of pullback from institutions for new deals,” explains Zegen.

Construction costs will likely remain high into 2023, thanks to a mismatch between government stimulus-driven construction demand and supply side disruptions, according to the Oxford report.

Such inflation typically results in cost overruns, delays and cancellations for construction projects. “We are already seeing a growing lag between building approvals, commencements and completions in a number of geographies, and also an increasing dropout rate as a growing number of approved projects are delayed or abandoned,” the report stated.

Nominal construction spending and actual construction activity is therefore expected to further diverge over the coming years. This will apply not only to new construction, but also renovation and maintenance of existing assets, according to the report.

However, Oxford Economics also noted that inflationary periods are typically followed by a period of relatively flat prices, since higher wages will help to attract more construction labor and increased prices will encourage suppliers to produce more materials. With supply and demand more in balance, costs are consequently expected to moderate.

Patinkin notes that it is unlikely there will be double-digit percentage drops in cost for developers, but price softening could help some projects to move forward again.
“I’m hopeful that we’ll see near-term construction starts go up,” Patinkin says. 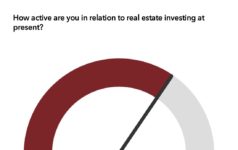