Am I earning the right wage? Is what I do reflected in my pay cheque? No matter what the sector, no matter what point in a market cycle, these questions are common ones pondered by staff junior and senior alike.

The problem for most people working in the private equity real estate industry is that there are very few places to find the answers save perhaps after-hour socials with peers. Private equity style businesses are intrinsically private after all.

That’s why PERE has teamed up with executive search firm Sousou Partners to bring you a comprehensive guide to compensation levels across Europe, North America and Asia and across five levels of seniority.

Like any investment, an individual’s compensation is subject to a variety of circumstances so a definitive guide is impossible. However by providing ranges, median averages and mean averages of compensation levels over the years leading up to, during and after the global economic crisis, we can offer an idea of what analyst, associate, vice president, director and managing director level employees should expect to take home today and how these earnings compare with earnings from preceding years.

Ghada Sousou, managing partner at real estate and infrastructure-focused Sousou Partners, says in general compensation levels today have adjusted to more rational levels after the “mad” months of 2007 prior to the advent of the credit crunch. She recalls: “Looking back, people were over-hired, over-paid and over-promoted.”

She says back then much of employment conversations were predominantly focused on compensation levels. While general compensation levels have regained some resemblance of pre-credit crunch levels, following significant decreases in 2008, Sousou suggests job seekers today are just as mindful of other factors. “Now primarily it’s about things like the opportunity ahead, the stability of the fund, the commitment to the asset class and the ability to go out and raise capital,” she says.

Sousou paints a picture of a private equity real estate recruitment market showing signs of coming back to life following a year of relative stability. Barring a handful of mandates, Sousou Partners saw little by way of activity up until January this year. She noted little movement until the New Year, from which point her firm was far busier. However by April, recruitment drives had slowed again.

Sousou translates this limited burst of activity as the result of firms spending last year analysing what they needed and, following the festive holidays – a universal and mental break for most people – actually implementing their plans.

Her observations over recent months have led her to believe that firms with holes to plug or specific growth ventures to populate currently are hiring.

In particular, Sousou says capital-facing roles such as chief financial officers, investment relations and capital raising executives are in greatest demand although asset management skills are also widely coveted. Perhaps predictably, she says investment professionals are in less demand. “Those guys who spent the last decade sourcing deals are just not being sought after at the moment unless there is a specific need. Today it’s more about professionals with strong fundamental training in bricks and mortar and value creation.”

A significant proportion of private equity real estate firms are currently fire fighting issues from dire performing recent vintages and have either morphed into asset management houses, are winding down or being spun out as is the case at some of the larger institutions. Others are simply altering investment strategies within the real estate asset class, such as shifting from an opportunistic to core return focus. Against that backdrop, other firms are running the rule over these platforms in the hope of locating the right talent to suit their needs.

Other PREI hires include a team from UBS Global Asset Management, the alternative assets arm of Swiss bank UBS, comprising Charles Crowe, Paul Dennis-Jones and Andrew Grigson; Mark Chamieh, a London-based global marketing executive from JER Partners; and most recently, Eric Adler, who was joint-head of Europe at US developer and fund manager Tishman Speyer.

Smith acknowledges more talent has become available recently but he refutes any suggestion of making any discounted signings. “Good people always have options,” he says. “The people we pursued all had options so let there be no illusion I had any leverage over them that allowed me to cut great deals that I’d be happy with but they would regret 10 years from now.”

He adds: “But what is evident today is that if you aren’t able to get your number one choice, there are probably more alternatives as more people are in the market [for jobs].”

Smith believes compensation expectations are generally lower across the seniority spectrum of both base pay and bonuses, the latter of which took a real hammering between 2007 and 2009 (see Payscales: past and present, right). However, for senior staff things are slightly different. “At the senior level what people are most concerned about is what their earning potential is,” he points out. That comes through investment participation and carried interest. For this minority, capital raising capabilities, current and future, are of paramount importance. 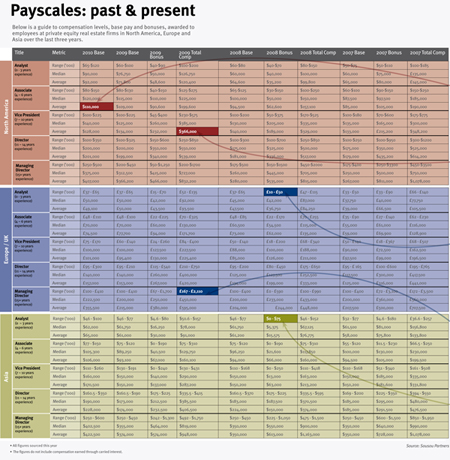 Apollo Global Management is another business in growth mode. Since appointing sector veteran Joe Azrack to lead its real estate platform two years ago, Leon Black’s alternative investment giant has grown from zero people to 20 and was, at the time of writing, just minutia from adding a significant number of employees from the 80 staff-strong Citi Property Investors (CPI), the real estate investment management division of Citigroup, which Apollo is in the final throws of acquiring. The merger will be the second by Apollo this year following the capture of Holdfast Capital, a one-year old Asia business launched by ex-Colony Capital Asia head Grant Kelley. That merger saw Apollo’s ranks increase by seven staff.

Stuart Rothstein, chief financial officer at the firm’s real estate division Apollo Real Estate, would not comment on Apollo’s corporate activity, but he subscribes to the view that good staff are nearly always paid market rates and this applies at his firm too. “That comes both relatively and absolutely,” he says. “Relative to the market but absolute in terms of where they would fit into Apollo and their peer group within Apollo.”

Rothstein says the firm has seen new joiners pay significant attention to the “soft provisions” in their contracts as well as their remuneration packages. He refers to items including notice provisions and non-solicitation and non-compete agreements. In addition to these elements, Rothstein also spends time considering items like ex-patriot packages which are commonplace among global platforms. Some firms make provisions for things like schooling and cars, however Rothstein says Apollo is more focused on helping out with accommodation. “We don’t want to be sorting through multiple layers of invoices on a monthly basis,” he explains.

Adam Calman, principal at real estate consulting and investment management firm, The Townsend Group, also pinpoints notice periods as an area important to prospective staff. He says: “If candidates are being asked to risk tenure in a place either through vanishing promote or lower bonuses then they want longer notice periods. Whatever it was in the past, they want something longer today.” Calman says he has seen notice periods offered of between one month and a year.

Townsend is another business that has been in opportunistic recruitment mode. When ING Real Estate Select, the multi-manager business of ING Real Estate Investment Management began a consolidation exercise earlier this year merging it’s offices in London and Hong Kong with those in The Netherlands and Singapore, the expanding Cleveland-based business saw an opportunity to recruit.

Townsend picked up veterans Nick Cooper, Damien Smith and Nicholas Wong, along with two others. While he admits the hires were opportunistic he states: “I have only ever hired a team when they’ve been disgruntled or when there’s been a significant corporate event happening.” He describes “nicking a team per se” as a “pretty poor show” but admits it does happen elsewhere in the marketplace.

In terms of compensation, he says: “Good people are often worth what they think they are worth. Okay you’d probably not get a signing bonus these days but we’re certainly going to be paying market salaries and market bonuses. You’ve got to do things that keep your platform intact otherwise you won’t sustain a viable business.”

Sousou says while bonuses are not off the table, in light of recent widespread media and public scrutiny, base pay has risen, particularly at senior levels and often at the expense of bonuses. This, she says, has been particularly evident at investment banks which attracted much of the glare. Private equity real estate groups, for the most part, followed suit and adjusted the structure of compensation to resemble the changes made by the investment banks.

Some banks with private equity real estate platforms altered their compensation structures to both deflect scrutiny and retain their stars, however often those staff still intent on finding new opportunities elsewhere found the going tough. Sousou explains: “At the height of the crisis many of our clients wanted to avoid those firms with the spotlight on them. Their track record was tainted and so their ability to fundraise would be hurt. It’s important to note, anyone active in 2006 or 2007 has a track record issue.”

But she says views are now different. Employers are now differentiating between those executives able to play out their own judgments then and those without the authority to do so. “There were certain firms where even the managing director may not have had the authority and so not much say in terms of how capital was deployed,” she explains.

Now that much of the dust has settled following the downturn, more employers are recognising and analysing the context surrounding an individuals’ performance during the last frothy years of the last cycle and into the downturn. While recruitment today is largely restricted to essential hires, when it does return in earnest job seekers in private equity real estate should feel warmed to know that. Furthermore, while the market is rejuvenating it would seem compensation levels are on course to compare with healthier times.