From the New York event’s scene-setting, opening interview with Related Companies founder Stephen Ross, through the panels that succeeded it, the elements characterizing tomorrow’s most attractive office space were regularly dissected. If we were to construct an office of the future using only what was said on PERE’s American stage, here’s what it would include:

Given increasing preferences by office occupiers for flexible working conditions for staff, there’s rarely a need for 100 percent-capacity space. At Hudson Yards, Related Companies’ 30-acre headline development in the Big Apple, for example, tenant Boston Consulting Group, the consultancy firm, has taken 60-percent capacity space, safe in the knowledge that the other 40 percent will always be on the road or otherwise working remotely. This is where hot-desking comes in: employees check-in the night before heading to the office to signal their need for a desk. Upon arrival, they’ll grab desk accoutrements from lockers and head to assigned desks. Even BCG’s CEO does not have an office.

The proliferating use of online cab services has prompted developers to reduce the number of supplementary car parking spaces. One panelist even suggested the advent of automated cars could see office car parking spaces eliminated entirely.

Don’t be surprised to see the office empty as its occupier’s workforce assume less traditional working hours. As one panelist remarked, occupiers, particularly those brimming with millennials, may well not be utilizing their property at 9am. Come back at 9pm, on the other hand, and the space is a din of activity. Such engagement with the workplace is one indicator that a development declaring a ‘live-work-play’ culture is getting it right.

The office of the future’s common parts-to-workspace ratio is markedly different to its predecessor. One panelist highlighted how the queues for elevators and toilet cubicles regularly seen at New York’s Bloomberg building, only a 15-year-old office, for example, is a thing of the past. Tomorrow’s office will have way more common space and common amenities. Spare a thought, however, for a city’s outmoded office space in which the capital expenditure to retrofit outweighs the potential investment value.

If you follow the logic that the individual no longer needs his or her desk, then why does he or she need a phone? Employees can just use their own cell phones. That’s what is happening at VaynerMedia, another of Hudson Yards’ tenants, which expressly asked for no hardline phone lines to be installed, assuming staff’s own cellphones will suffice. Unsurprisingly, the same firm is also using far less space, 100 square feet per individual, a fraction of what firms of a similar ilk have used in the past. The firm has also taken seating to the next level, using benches over individual chairs.

In perhaps the most telling anecdote of the day, Ross’s lieutenant, CEO Jeff Blau, relayed the firm’s experiences pitching Hudson Yards to a multitude of tenants. While their property officers and chief financial officers were avid listeners to the firm’s real estate data-heavy pitchbook, it was a different story for the CEO. Detecting glazed eyes, Blau would ask what is the number one concern for their business. The response would invariably be retaining talent. Understanding this led to a change in approach and the upshot would often be a walk-through of an office building looking something like PERE’s creation above. 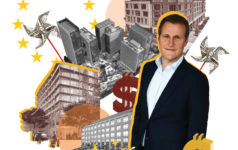 How Tishman Speyer has spent $12bn during covid 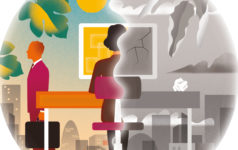