Ventas launched its flagship core open-ended fund in February 2020, a perpetual life vehicle focused on investments in core and core-plus life science, medical office and senior housing real estate in North America. As of May 2022, it has raised $2.1 billion of institutional investor capital for the vehicle.

Blackstone launched its third-series Asian real estate vehicle in June 2021, holding an initial first close at $4 billion for the fund in October 2021. It is aiming to raise $9 billion for the fund, 30 percent more capital than its second-series vehicle, which had confirmed $7.1 billion in capital commitments at its final closing in April 2018.

JP Morgan Asset Management launched Star Lake IV in November 2021. Star Lake Fund IV is a fund-of-one that invests in a variety of value-add real estate assets that can generate a 13 percent internal rate of return.

Cortland launched its flagship open-ended fund in December 2018 with a focus on acquiring and operating market-rate, well-located multifamily assets with durable, stable, recurring income and strong capital expansion in US growth markets. As of May 2022, Cortland has raised $2.15 billion of institutional investor capital for the vehicle.

NYSCRF allocates 9 percent of its investment portfolio to private real estate, which comprises $25.17 billion in capital.

As illustrated below, NYSCRF’s recent private real estate commitments have tended to focus on North American value-add vehicles in the residential sector. 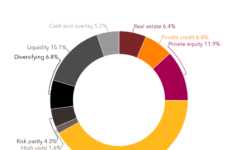 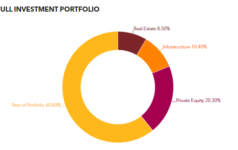