Delegates at PERE’s real estate conference in Tokyo have questioned whether the Japanese property market reached the pre-global financial crises peak. To some, the asset price inflation and the excess liquidity, both from domestic and international investors, chasing limited properties in Japan in a negative interest rate environment is reminiscent of the previous crises.

According to some speakers at Thursday's event, a new era is emerging in Japan that may be different from previous peaks, but has its own share of risks nonetheless.

“Whenever people start saying this peak is different from previous peak, that is sign that we are nearing the peak,” said Hidetoshi Ono, managing director of Japan Real Estate for Manulife Insurance. “The question is does the cycle still exist?”

Taisuke Miyajima, chief executive officer, president for Kenedix, spoke of the trillions of dollars of new money, largely from domestic Japanese institutions looking to diversify their bond-heavy portfolio, which is set to enter the market. This demand is expected to further inflate the prices of properties and push down yields further.

“The only thing that can change this market environment in the medium term will be some external shock like the Lehman Brothers collapse, or a breakdown in global capital markets. Otherwise Japan would continue like this. Abenomics is expected to be in place for at least another two years and the Bank of Japan has no option but to continue the current monetary policy,” remarked one institutional investor who spoke on the condition of anonymity.

According to Ono, the yield compression has made it a challenging time for insurance companies, most of them who do not use leverage, to find the right core deals at the right price in the market.

“In the past we were looking for longer term core returns of 5 percent. But in this environment, with plenty of capital chasing too few deals, this is difficult to achieve and we need to manage expectations and expand investment targets,” he said.

Kevin Colket, managing director at Starwood Capital Group, added: “We [real estate] have been beneficiaries of huge asset inflation from low interest rates. That is largely here to stay. Yields are so low around the world and that has made investing difficult. And outside of China, it has all become a yield play. It is the new normal.”

However despite the macro and currency risks of investing in Japan, Colket was of the opinion that the country is still safe relative to some of the other global economies. Despite the appreciation of the yen, other structural drivers including a growth in inbound tourism would continue to drive growth in the hospitality sector for instance. The rental properties sector is another attractive investment opportunity. 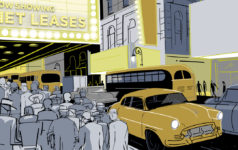