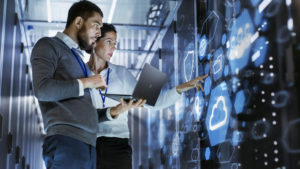 The firm has allocated an initial $1 billion to the new initiative out of KKR Global Infrastructure Investors III, which closed on $7.4 billion in September 2018.

As the platform grows, the buyout firm may support GTR with additional equity commitments, KKR said.

“In Europe in particular we see a market where [there] are many different regions, and cities, and countries that all need rapid robust infrastructure development to fulfill that growth,” Peisch said.

“We feel like we have a very differentiated team and product offering focused on the largest technology companies,” he added.

KKR’s GTR has teamed up with Mercury Engineering, a European engineering contractor with deep experience in data center construction, to design and develop a data center product.

For KKR, partnering with an executive team to build and scale a new company from scratch is not its typical MO. But this approach made sense when it came to investing in the data center category, Peisch explained.

“We spent a lot of time looking at a number of different types of transactions, including more traditional – what people think of KKR’s corporate acquisitions of large existing companies,” Peisch said.

“When we stack together the GTR management experience and the business opportunity, it feels very much like we are investing in a credible experienced business.”