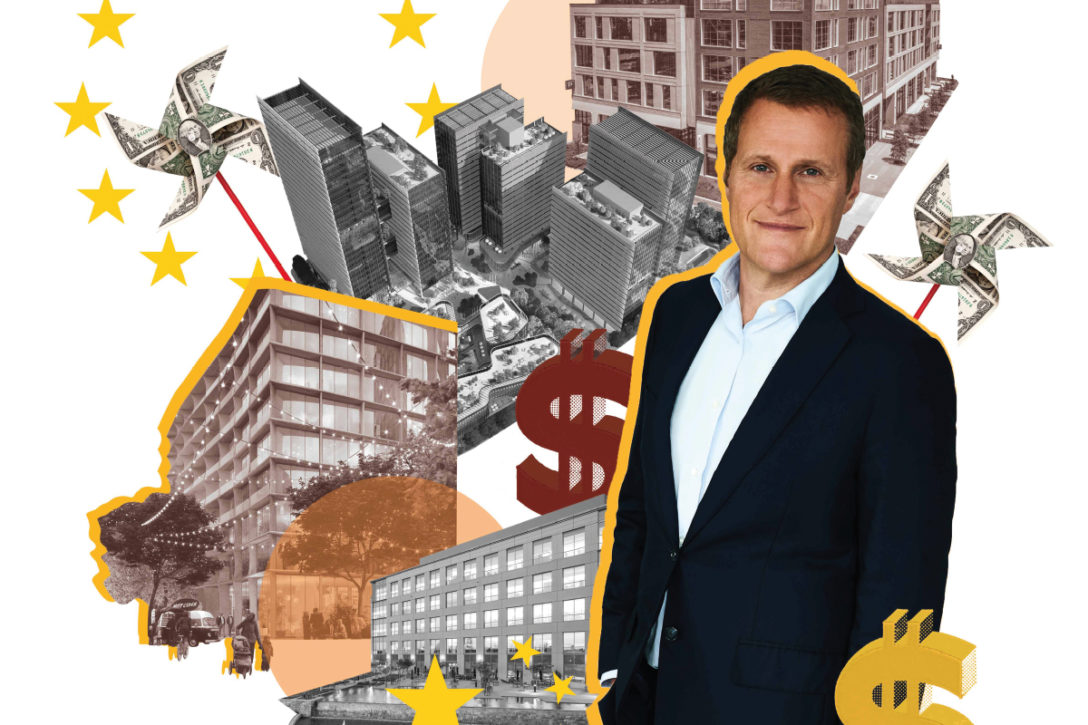 While the rest of the world is still trying to get a read on offices in the pandemic era, Rob Speyer’s view on the sector could not be clearer.

“What I believe with strong conviction is that offices will be a critical ingredient in the workplace equation,” the president and chief executive of Tishman Speyer tells PERE. “And virtually every CEO I talk to agrees with that premise.”

The New York property scion has put his own money – and his investors’ – where his mouth is. Since last year, he has overseen the acquisition of $6.3 billion of office space, more than half of a $12.3 billion global spending spree during the pandemic.

“Over the last year, it’s been one of the most active and acquisitive periods of our company’s history,” Speyer says from his office in Rockefeller Center, one of many iconic properties in the family-owned firm’s extensive portfolio.

Some acquisitions came at deeply discounted prices, Speyer says. But all align with his long-term vision of positioning his firm “at the intersection of real estate and innovation.” And that goes beyond traditional offices. Tishman has scaled its commercial laboratory business, deploying $2.6 billion into the space after raising $1 billion for its inaugural life sciences fund. It has also poured $790 million into real estate technology start-ups, bringing its early-stage proptech portfolio to 17 companies.

Since joining the business in 1995, Speyer has grown Tishman’s private equity arm from $11 billion of assets under management to more than $60 billion today. That ready access to institutional capital – in both discretionary funds and programmatic joint ventures – paved the way for the company’s rapid deployment during the pandemic.

“We didn’t anticipate covid. No one did. But we were ready for it,” Speyer says. “We evolved our business where we had a clear strategy and opportunities that fit squarely in that strategy. So, we’ve been able, during covid, to accelerate many of the initiatives that started several years ago.”

Normally press-shy, Speyer sat down with PERE to discuss his firm’s spending spree, detailing how and why it put $12 billion to work in what for most was a stagnant global market.

Speyer has been active up and down the Golden State. In San Diego, Breakthrough Properties – a joint venture between Tishman and Los Angeles-based life sciences investment firm Bellco Capital – scooped up a 9.9-acre development site last October and a three-building office portfolio in April.

“Silicon Valley remains one of the great natural resources in the United States,” he says. “It’s going to produce the world’s leading talent and therefore enormous real estate demand.”

Tishman is partnering with Major League Baseball teams in both cities to develop stadium-adjacent mixed-use neighborhoods. Last summer, it joined the San Diego Padres in the $1.4 billion East Village Quarter project, which aims to turn a surface parking lot into an office corridor for tech and biotech tenants. In San Francisco, Tishman is partnering with the Giants for the $2.5 billion Mission Rock neighborhood, which will include laboratory space, traditional offices, retail and apartments.

Speyer says the seeds of his company’s tech-focused identity were planted in San Francisco a decade ago. In 2011, the local real estate market was still reeling from the global financial crisis, but prominent firms from throughout Silicon Valley were scrambling to plant their flags in the City by the Bay. Figuring the market would need more space to meet demand, he forged ahead with a pair of speculative, all-equity office projects: Foundry Square III and 222 Second Street.

“That was a very counterintuitive bet in 2011,” Speyer says. “It was also a couple of the best investments we’ve made over the past decade.”

Tishman leased the entire 450,000 square feet at 222 Second Street to LinkedIn in 2014, two years before it opened. It sold Foundry Square III for $350 million in 2017, more the double what it paid for the property five years earlier.

Speyer’s firm has been active globally too. In July, it entered the Portuguese office market, acquiring a building in Lisbon through its European Core Fund. It also bought three office properties in Paris, an office campus in London and a residential tower in Vienna.

But the firm is American at heart, and its home country has remained its most active market. Speyer says this is because the US is home to “the greatest innovation economy in the world.”

In July, Tishman filed plans for a 900,000-square-foot project in Boston. The Harvard Enterprise Research Campus will be centered on lab space, but will also feature apartments, a hospitality component, a conference center and retail.

In Washington, DC, the firm acquired a mall with the intent of redeveloping the site with more of a residential focus. Globally, Speyer says the firm has amassed 12,000 rental housing units during the past decade. Since last year, it has made $2.4 billion of acquisitions in the sector and launched a platform focused on affordability.

“It was something we identified as both a growing need and a logical outgrowth of our business,” he says. “We have teams on the ground in many of the key residential markets and it was logical to put our teams to work on residential deals.”

“I’ve lived in New York my entire life, 51 years. Five times people have predicted the doom of this city and five times they’ve not only been wrong, they have been profoundly wrong”

Speyer also is bullish on his hometown. His firm has not made any acquisitions in New York during the pandemic, but is in the process of bringing two new office towers to the market. One of these is the Spiral, a 2.8 million-square-foot skyscraper in the blossoming Hudson Yards neighborhood. The building, which topped out in January, is a little more than 50 percent leased, but Speyer says activity is picking up and he has no concerns about the long-term viability of the property or the city as a whole.

“I’ve lived in New York my entire life, 51 years,” he says. “Five times people have predicted the doom of this city and five times they’ve not only been wrong, they have been profoundly wrong.”

But Speyer’s firm is not putting all its eggs in the gateway basket. It has hedged its bets by adding exposure to some of the country’s rising secondary markets. Most notably, it has entered Austin, Texas, the tech relocation capital of the covid era, by acquiring a pair of newly built office buildings on the city’s east side. One, which was 20 percent pre-leased when the deal was agreed, ended up being fully pre-leased by the time the acquisition closed.

“Most innovation economy companies have to expand their geographic footprints to help grow their businesses,” Speyer says. “So, we have invested in cities like Austin, Bellevue, Washington and Nashville, where innovation economies are expanding to access a new talent pool. That’s been an important strategy and it will continue to be.”

Tishman has made one acquisition in China this past year. It partnered with the industrial group Shanghai Dowell Trading to acquire an extend-stay hotel from Singapore-based Frasers Property for 1.6 billion yuan ($246 million; €210 million) in January. The firms will reposition the Beijing Fraser Suites into apartments.

Since entering the Chinese market in 2006, Tishman has grown its portfolio there to 40 billion yuan. In 2012, it became the first non-Chinese real estate company to raise a domestic, renminbi-denominated fund. It has since raised six more, with its latest being used for the Beijing hotel acquisition, PERE understands.

After expanding in Europe in the 1980s and Latin America in the 1990s, Speyer says China was “a logical next step.”

“China is the second-largest economy in the world and will be the largest economy soon,” he says. “We saw an opportunity to help our customers in China by satisfying their real estate needs and also developing some important domestic relationships. We’re very optimistic about China and we’re very optimistic about Tishman Speyer’s prospects in China.”

Acquisitions aside, the firm had its hands full in the country with several large-scale developments. In the southeastern city of Shenzhen, Tishman is building an office complex for the electronics manufacturer Lenovo Group. Meanwhile, in Beijing, it is converting the country’s oldest steel mill into a venue for the upcoming 2022 Winter Olympics.

In July, Tishman leased and sold 2.5 million square feet of newly developed office space in Shanghai to ByteDance, the parent company of social media platform TikTok. Speyer says the deal, which was three times bigger than Tishman’s next-largest transaction, speaks to the scale of opportunity in the country.

“ByteDance is exactly the kind of company we want to do business with, not just in China, but across our global platform,” he says. “They’re a global leader in innovation and that’s exactly who we want to be doing business with and learning from.”

Tishman’s China team spent a year negotiating the deal with ByteDance. At the time, president Donald Trump was attempting to ban TikTok from the US, citing security concerns. He also pressured ByteDance to divest from the platform.

Existential questions persist in the real estate sector, particularly around gateway city centers and commodity offices. But Speyer pays little heed to doomsday predictions about the market at large. “I focus like a laser beam on what we’re doing,” he says. “I don’t allow myself to get distracted by what others are doing. That’s the best way to stay innovative.”

That is not to say he expects a return to pre-pandemic office usage. Speyer anticipates a year-long experimentation process, in which employers identify the level of flexibility that best suits them. And if there is a consolidation, he expects it to benefit the properties that are most attractive to end users, a scenario for which he has spent years preparing.