The ranking tracks discretionary equity committed to real estate through cosssssmmingled funds, separate accounts, joint ventures, club vehicles and direct acquisitions. A full methodology – and the entire ranking itself – can be found here.

Now, we kick off our countdown with the investors that round out the ranking, from 50-41…

Teachers’ Retirement System of the State of Illinois

Rounding out the Global Investor 50 is the Teachers’ Retirement System of the State of Illinois. In the last year, the pension bet on real estate’s biggest names and its rising stars. Over the year, TRS wrote checks to Blackstone and the Carlyle Group’s opportunistic funds – for the former’s latest Asia fund and the latter’s most recent US vehicle. In February, TRS committed $100 million to Chicago-based Oak Street Real Estate Capital for the firm’s fourth core-plus fund, and $40 million for Conshohocken, Pennsylvania-based Exeter Property Group’s latest value-added vehicle.

Next on our list is the American International Group, which has $7.18 billion committed to the property asset class. AIG Global Real Estate’s domestic portfolio is broadly diversified by region and property type, with the US investment teams working out of offices in New York, Los Angeles, Atlanta, San Francisco and Stowe, Vermont. In Europe, the investor’s portfolio is focused on development, core-plus, and value-added acquisitions, including in Eastern European markets such as Poland. For Asia, AIG works opportunistically and the jewel in its portfolio is the Shanghai Centre, a mixed-use development encompassing 472 premium-serviced apartments, 323,000 square-feet of prime office space, a three-level retail plaza and an exhibition atrium.

MPK Migros Pensionskasse is the $22.9 billion pension fund for Switzerland’s largest retailer, Migros. The fund distinguishes itself from its Swiss peers due to its large real estate allocation. MPK invests 40 percent of its assets to fixed incomes, 30 percent to equities and 30 percent to real estate, of which a quarter lies in Swiss property. The fund manages its domestic assets in-house but invests overseas through funds.

Its preference is to acquire residential and commercial assets as well as development sites, with ticket sizes ranging from €20 million  to €100 million. It is understood  MPK has no plans to change its real estate allocation or cap in 2018  but reviews its strategy every three years.

Real estate is set to be a beneficiary of the March announcement by Denmark’s largest private pension that it plans to triple its investments in alternatives within three to four years. PFA Pension already has $7.2 billion committed to the asset class, across direct investments in its domestic market and via funds, joint ventures and club deals for international real estate. Recent notable commitments include the $150 million-plus check it wrote for Morgan Stanley Real Estate Investing’s maiden core property fund in Asia last year. It was also part of a Danish institutional investor club that acquired the largest portfolio of prime logistics properties in the Nordics for approximately €650 million in 2015.

The State Teachers Retirement System of Ohio has just made it into this year’s Global Investor 50, despite targeting dispositions between $400 million and $800 million in its direct portfolio. The pension system achieved that goal, even while selling $650 million in the 2017 fiscal year, with $50 million in the disposition pipeline. Sales this year included a $65 million mall in Bensalem, Pennsylvania, a $474 million office in San Francisco, a $69 million office in Atlanta and a $79 million apartment in Redmond, Washington. The investor said the sales were due to it being overweight in real estate and the market being favorable to sellers. STRS also identified $300 million in further dispositions for the next fiscal year, freeing up capacity for acquisitions.

Korean pension giant Samsung Life Insurance has 4 percent of its 215 trillion won ($188 billion; €160 billion) total assets under management allocated to real estate. The investor makes its property investments through subsidiary Samsung SRA Asset Management, which also manages third-party capital for a global core/core-plus property fund. The insurer’s marquee transaction in 2017 was the Commerzbank Tower in Frankfurt. It acquired Germany’s tallest building through an individual mandate with Augsburg, Germany-based real estate investment manager Patrizia Immobilien. The deal value was not disclosed but was reported to be as much as €800 million. Samsung was also reportedly the preferred buyer for a €380 million office building in Brussels.

The £46 billion ($61.2 billion; €51.8 billion) BT Pension Fund invests in private real estate through its investment management arm, London-based Hermes Investment Management. Founded in 1983, Hermes has sought to create a third-party client base on behalf of the fund, and this base now represents almost half of the company’s revenues. Hermes’ preferred route to investment is through joint ventures, as demonstrated though its recent JVs with CPPIB and Redevco. There have been recent direct outlays too, including a purchase of three City of London-based office assets for just shy of £100 million last summer. As of June 30, 2017, the fund’s real estate allocation was 12.4 percent, a figure it is looking to slightly reduce.

The $68.9 billion Virginia Retirement System’s real estate portfolio is diversified across the four main food groups, as well as significant holdings – 3 percent of its real assets portfolio as of Q2 2016 – in hotels. VRS had 82 percent of its real assets portfolio invested domestically as of Q2 2016, with 8 percent in Europe, 6 percent in Asia and 4 percent elsewhere. Its largest managers are a who’s who of the real estate space: Blackstone, Clarion, JPMorgan, LaSalle Investment Management, Morgan Stanley, PGIM and the Pritzker Realty Group round out the top names. New commitments in the last year included $125 million to Washington, DC-based Carlyle Group’s eighth opportunistic fund and €75 million to London-based Tristan Capital Partners’ fifth European core-plus vehicle. Both vehicles invest across property types.

Helvetia is one of Switzerland’s largest insurance companies, with a history stretching back to the mid-19th century. The SFr47 billion ($48.2 billion; €40.8 billion) firm has so far committed $7.67 billion to private real estate. Helvetia only invests in its home market and does so through its two main platforms, one focused on French-speaking areas of Switzerland, the other covering the rest of the country. Since 2010, the firm has principally focused on residential and office assets in the major cities of Geneva, Zurich and Basel. This year Helvetia has committed around SFr600 million to the asset class via the two platforms. At present its real estate allocation is 14 percent, but there is room for this to increase to its target of 20 percent.

The New York City Retirement Systems is a $185 billion pension fund representing the city’s board of education, fire and police departments, teachers’ retirement system and city employees’ pension fund. The pension fund manager has committed $7.99 billion to private real estate as of May 2017, the majority of which comes in the form of limited partnership interests in funds. In the last year, NYCRS has committed to Blackstone’s flagship global opportunistic strategy, as well as to its European opportunistic fund, among 12 other commingled private real estate funds. The investor also makes lower risk investments via fund managers and committed to LaSalle Investment Management’s North America-focused core vehicle, LaSalle US Property Fund. 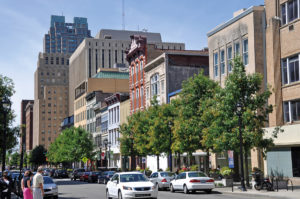 North Carolina Department of State Treasurer, which manages $120.1 billion in retirement and fringe benefits of the state’s public employees, including for the North Carolina Retirement System, has been a backer of real estate funds for some time. Its most recent real estate commitments include a $200 million earmark to Blackstone Real Estate Partners Europe V and $100 million to Crow Holdings Retail Fund II. In Asia, the investor committed $100 million to AG Asia Realty Fund III, managed by Angelo Gordon. However, the portfolio make-up of the investor is changing. In March, the pension administrator said it is considering reducing the stakes in private real estate investment funds and shifting more to separate accounts to reduce costs.