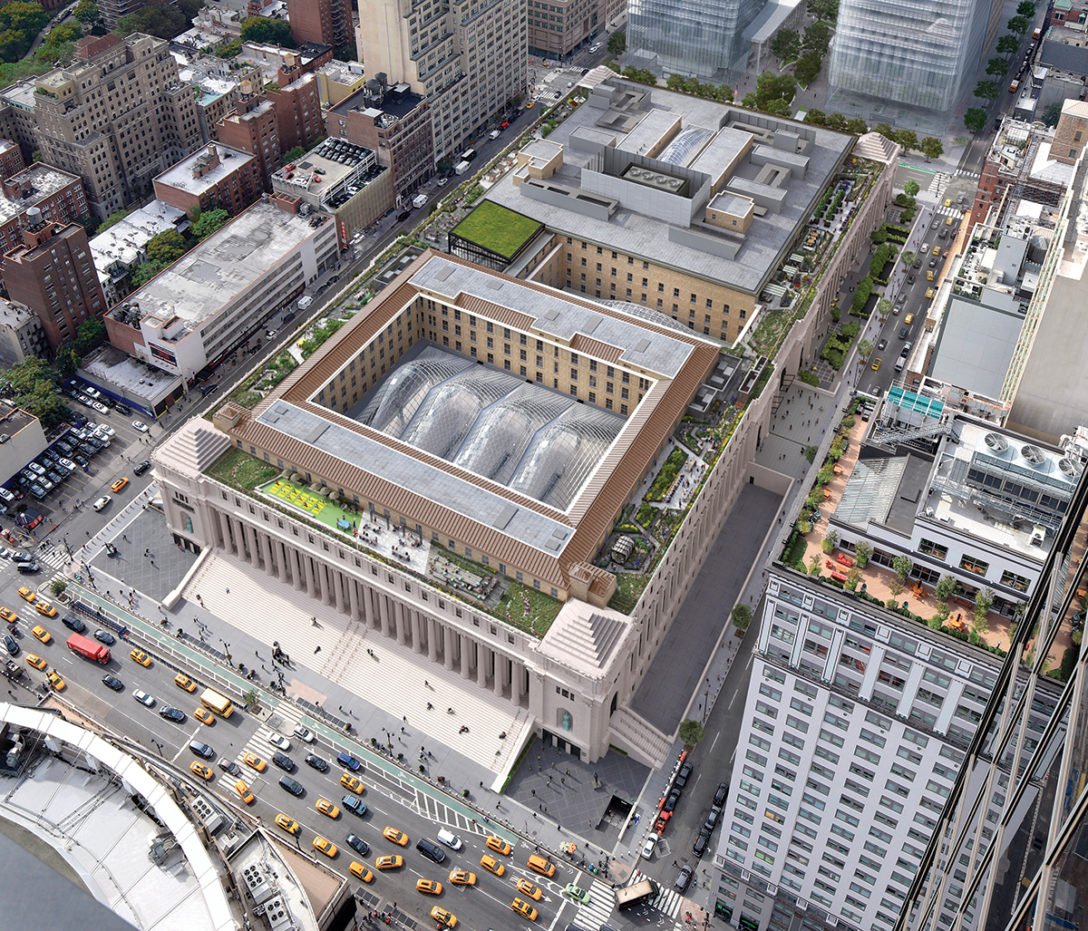 Once a dead zone of forgotten warehouses and railroad tracks, Manhattan’s Far West Side has since been transformed into a mixed-use neighborhood of modern skyscrapers. Pre-covid-19, the district, now known as Hudson Yards, was the beating heart of the city’s office market.

A stone’s throw from these glass and steel behemoths sits an icon of old New York: the Farley Building, a five-story complex with a pillared façade of polished stone. Like them, private investment is thrusting this landmark post office with its Beaux-Arts exterior into the 21st century.

A joint  venture between Vornado Realty Trust, a listed real estate investment trust, and locally-based The Related Companies, one of two institutionally-backed firms behind the broader Hudson Yards development, acquired the property from New York State through a 99-year lease in 2017. They committed more than $1 billion to making it a Grade-A, creative office building. The investment paid off when Facebook signed a 730,000 square foot lease in early August.

Opened in 1914, the property spans two full city blocks and was first known as the Pennsylvania Terminal before being renamed the General Post Office. In 1982, it was dedicated to the New York politician and former postmaster general, James Farley.
It was designed by the renowned architecture firm McKim, Mead & White, the group also behind the original Pennsylvania Station, located across from the post office, and other prominent structures in New York, New England and Washington, DC.

Engraved into the cornice of the Farley Building are the words: “Neither snow nor rain nor heat nor gloom of night stays these couriers from the swift completion of their appointed rounds,” a phrase that became the unofficial motto of the US Postal Service, which continues to operate in the property.

The reimagining of the Farley Building began in 2016, when the state endeavored to build a train hall to access rail lines beneath the sprawling complex. The following year, Vornado and Related signed onto the effort, initially committing $630 million to the office and retail components of the project via a 50-50 joint venture. In 2018, Vornado, which has two other nearby developments, bought most of Related’s share, increasing its equity share to 95 percent.

By the end of last year, Vornado had spent approximately $600 million on converting the century-old building into contemporary office space with high-ceilings and open-floor plans.
It has budgeted another $430 million to complete the job. When done, the property’s 740,000 square feet of office will be supplemented with 120,000 square feet of retail and 70,000 square feet of landscaped outdoor space on the fifth floor.

Enter Facebook, which leased 1.5 million square feet in Hudson Yards proper last fall and had been interested in the Farley Building for about a year. At one point, the social media conglomerate was said to be in competition with Apple to occupy the property.

Despite the uncertainties foisted upon the office sector by the pandemic – and Facebook’s own commitment to let employees work from home permanently – the company’s desire for the space remained steadfast. Robert Cookson, the company’s vice-president of real estate and facilities, said the property will be a hub for the its tech and engineering teams.
And so through snow, rain, heat and gloom of heavy renovation, the Farley Building lives on.