“If you think about our real estate portfolio and why we have confidence looking forward, it’s because we’re 40 percent allocated to the best sector in real estate globally.” 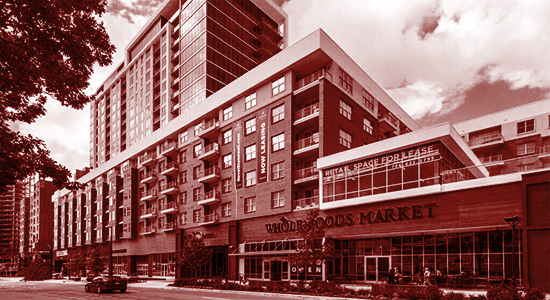 SPAC at it again
SmartRent is the latest proptech startup to go public through a merger with a special purpose acquisition company, or SPAC. The Arizona-based firm, which specializes in smart home technology for rental housing units, was acquired by the proptech venture capital group Fifth Wall in a $2.2 billion deal. To finance the deal, Fifth Wall used $345 million from a so-called blank check firm it floated earlier this year. Backed by Amazon, SmartRent has also pulled in financial support from some of the biggest names in private real estate, including Starwood Capital and Blackstone – which invested through its hedge fund solutions business, Blackstone Alternative Asset Management. The homebuilder Lennar and single-family rental specialist Invitation Homes have also invested in the platform, indicating its appeal beyond multifamily dwellings. The merger with Fifth Wall’s SPAC eclipses Tishman Speyer’s $1.5 billion SPAC acquisition of the building software firm Latch.

A familiar route
Mapletree Investments, the state fund-owned investor, has a significant track record raising public equity in its home jurisdiction of Singapore for real estate strategies. It has floated four REITs to go along with its six private real estate funds, according to Bloomberg. The news wire said student housing is next with plans, private for now, to raise about $1 billion for the strategy, citing “people familiar with the matter.” If the firm, which is owned by Temasek, is successful, the REIT would represent its biggest listing since 2013 when it raised $1.4 billion for the Mapletree North Asia Commercial Trust. Student housing is a sector Mapletree knows well, particularly in the UK, where it has 50 assets comprising 22,000 beds. Including projects under development, its total student accommodation assets under management amount to approximately S$3.6 billion ($2.72 billion; €2.25 billion).

Taking ownership
San Antonio-based manager USAA Real Estate has acquired full ownership of New York-based real estate investment firm Square Mile Capital Management, continuing the wave of M&A activity taking place in the real estate industry. Square Mile Capital has more than $8 billion in assets under management. Following the takeover, the company’s co-founder Craig Solomon will continue leading the business as chief executive in addition to being on the board of USAA Real Estate. Meanwhile, Jeff Citrin, the other co-founder, will serve in a senior advisor capacity and remain on the investment committee for the legacy funds. USAA Real Estate’s strategic partnership with Square Mile first began in 2012 when it took a 49 percent non-controlling interest in the firm.

Down year
Confirming PERE‘s own Q1 fundraising report, which shows a falling number of fund closings, a survey from INREV, ANREV and NCREIF tallied just €123 billion of capital raised across non-listed vehicles in 2020.

A data center foray
As demand for digital capacity continues unabated, a growing number of institutional investors are upping their exposure to data centers. The latest example is the Dutch institutional real estate manager Bouwinvest Real Estate Investors, which has invested €50 million in Sabey Data Center Properties, a US-focused data center owner, developer and operator. Bouwinvest made the investment indirectly through National Real Estate Investors, a Washington, DC-headquartered manager. This is the first US data center investment by Bouwinvest, which manages around €13.4 billion in real estate assets globally. As Bert van den Hoek, senior portfolio manager for Bouwinvest’s North American investments points out, the foray underscores the growing importance of data centers as an “emerging real estate asset class in the extension of the ‘core’ risk definition of income-producing properties.”

Retail repositioning
When one of Europe’s best-known retail property REITs makes a hire to facilitate use changes for its real estate, it is worth noting. Hammerson, the London-listed property company known for its retail focus, has hired Harry Badham (his LinkedIn profile here) from AXA Investment Managers for the newly created C-suite role of chief development and asset repositioning officer. Badham will oversee development teams working on ‘destination repositioning’ across Hammerson’s UK, Ireland and France holdings. Having cut his teeth on a mix of workspace, retail, leisure, civic and residential projects including 22 Bishopsgate and 6 Pancras Square in London, Hammerson CEO Rita-Rose Gagné (her LinkedIn profile here) sees the appointment as an ideal way to maximize value at a time when its main retail offering is experiencing serious headwinds. Converting retail to alternative uses is the focus of PERE’s incoming cover story. Be sure to look out for it from May 1.

Sign of the times
Is the end of forbearance nigh? For perfectly solvent occupiers using government protection measures to avoid paying rent, quite possibly so. AEW’s UK REIT announced the successful outcome of legal action taken against “two well-funded national tenants” to recover rent arrears. The REIT, managed by manager AEW, said following the ruling it was “confident of further recovery given the outcome of its successful application to the court.” It will seek to recover legal fees incurred too. The claims in this instance amounted to just £1.2 million ($1.6 million; €1.4 million), but more, and bigger, claims are in the offing. “AEWU has always made it clear that it will take legal action against tenants if required, particularly well-resourced companies that it believes are able to pay their rent and have sought to take advantage of government legislation intended to protect financially vulnerable tenants,” the manager, which manages many private vehicles besides, said.

CPPIB pushes into Korean logistics
The Canada Pension Plan Investment Board has decided to make a bigger bet in Korea’s logistics market after the successful exit of its previous investments. The investor and ESR will jointly invest another $500 million into their 2018-vintage Korea Income Joint Venture. The pair has sold six assets in the joint venture via the $650 million ESR Kendall Square REIT IPO last year. Korea’s rapid e-commerce development allowed the logistics sector to perform well in the public market despite the relative youth of the property type and the disruption caused by the pandemic. As of the end of last week, the stock price of ESR Kendall Square REIT has climbed more than 22 percent since its debut in December 2020.