“If changing assumptions and inputs pre-covid, during covid or post-covid produce results in analysis that cause us to pause, we will. But all the key data inputs and trends underlying our decision-making are being accentuated under covid, and they are giving us conviction in our prior aims” 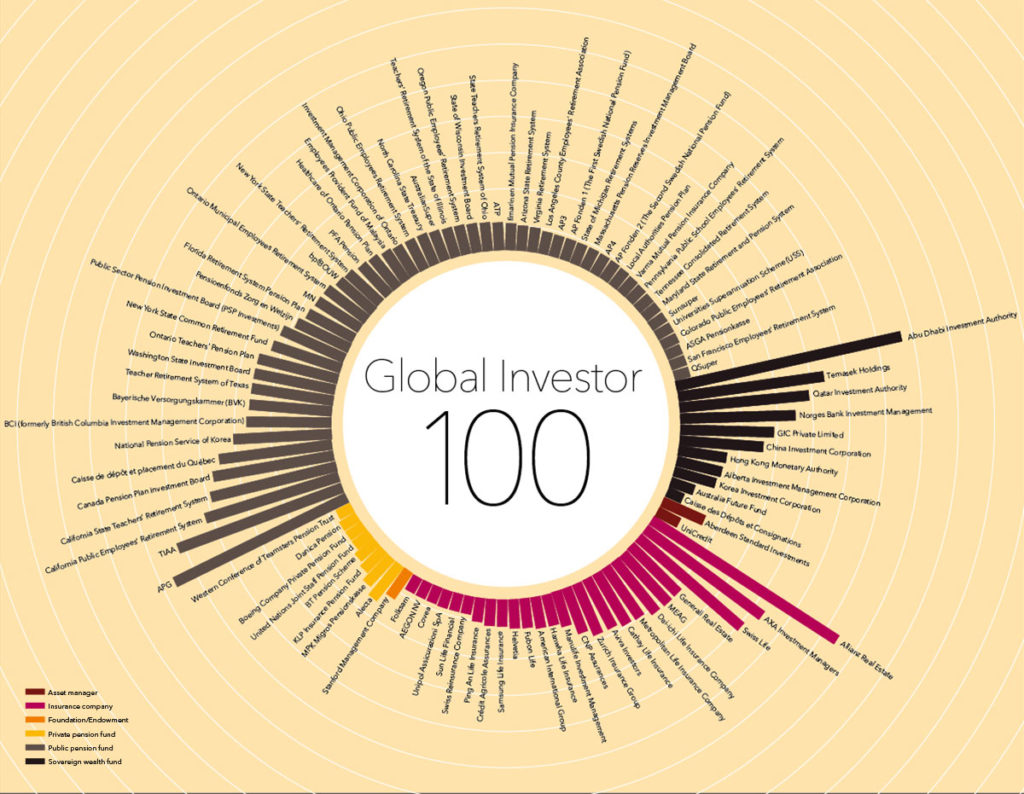 The widespread uncertainty and volatility from covid-19 have not been enough to stifle institutional appetites for real estate this year. The top 50 investors in PERE’s annual ranking have allocated $1.1 trillion to the asset class during the past 12 months, up from $1 trillion in 2019. And that figure is not the only one to grow in 2020: this year’s Global Investor showcase has doubled to 100 institutions.

Abu Dhabi Investment Authority keeps its number one spot with Allianz Real Estate nudging out APG to take second place. Notably, the Canada Pension Plan, a mainstay in the top 10 since 2015, slipped to 11th place after its real estate assets dropped in value by 7.5 percent year-on-year.

Colony Capital is getting out of the hospitality business, having agreed to sell the bulk of its holdings in the sector – five portfolios and a roughly 55 percent interest in another portfolio – to hotel investor Highgate in a $2.8 billion deal. All told, the portfolios comprise 22,676 rooms across 197 hotel properties. The sale is due to close during Q1 2021 and will leave Colony with one other hotel portfolio, which is currently under receivership.

Colony chief executive Marc Ganzi called the portfolio sale “a significant milestone in Colony’s digital transformation.” B Riley FBR analyst Randy Binner said in a research note that the transaction was one of several measures that “are setting the table for the emergence of a purely digital investment platform in 2022-23.”

This follows the warehouse specialist’s rapid expansion into adjacent industries after its 2018 privatization. Previously, it ventured into logistics-related private equity with the launch of its $1.6 billion Hidden Hill Capital fund in 2018. That year it also hired Xiaozhou Zhao, the head of Alibaba’s internet data center department, to build its data center business in China.

A survey out last week of 100 real estate CEOs by Chicago-based executive search firm Heidrick & Struggles found that while many C-suite occupiers think diversity and inclusion are critically important, few enforce that view.

‘The new normal’ has become an inescapable catchphrase during the pandemic, especially within the real estate industry as it attempts to grapple with altered demand for office, retail and hospitality in the years ahead. KKR took the issue on in a white paper released last week, aptly titled The New Normal. In it, the private equity titan argues it is not time to call it quits on cities, but to look for a dispersion of economic activity in what has been described as a ‘hub and spoke’ model, with midsize cities taking on a bigger role, particularly in the southern and western US.

Have thoughts on this matter? We know you do. Send a note to Kyle Campbell at kyle.c@peimedia.com with your view on how top real estate markets will recover post-covid

Is single-family the new multifamily? For some, it is even better. US rental homes have, for years, quietly benefited from the same secular trends as apartments: namely, a housing shortage and the rising cost of ownership. But this summer, the sector blew up. JP Morgan Asset Management started a $625 million build-to-rent venture, Brookfield launched a $300 million single-family fund and Blackstone invested $300 million into Tricon Residential, a top operator in the space. This rush of capital follows the wave of renters fleeing big cities during the pandemic in search of greener pastures and landing in rental homes.

Here is the edge: institutions own just 2 percent of the rental homes in the country, so the competition is limited, and the expansion opportunities are many. As Dana Hamilton, senior managing director at Pretium Partners tells us, this results in “a 100 basis point-plus additional yield for similar risk” to multifamily. Look out for more extensive coverage of this topic from us later this week.

European investors are increasingly keen on real estate that doubles as standalone operational assets – think care homes and student accommodation. Allocations to these niche property types outstripped traditional groups such as residential and mixed-use between 2005 and 2019, according to a report by INREV. The current allocation to these specialty assets stands at 11.8 percent, INREV said. But the proliferation of shorter leases in traditional sectors will be one tailwind behind that number growing notably in the future.