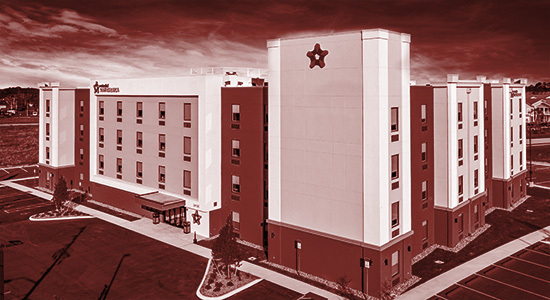 Playing defense
Extended Stay America’s boards of directors jointly outlined their reasons why they “strongly support” Blackstone and Starwood Capital Group’s $6 billion joint takeover of the company in a proxy statement last week. Below are the key points in response to shareholders that opposed the pricing and timing of the deal, which is the largest hospitality play since the pandemic:

Cold reception
Invesco Office J-REIT, the Japanese office real estate investment trust of US manager Invesco, has responded to Miami Beach-based private equity real estate giant Starwood Capital Group’s April 6 takeover bid. In a notice published last week, the REIT called the tender offer “highly coercive,” noting Starwood has “suddenly and unilaterally commenced the tender offer without any prior consultation.” Hostile takeovers or privatizations of REITs in Asia have proven to be difficult historically as many REITs are sponsored either by the government or major developers that may not want to surrender control. If Starwood ultimately succeeds in its takeover attempt, it will become the first company to delist a Japanese REIT in the past five years.

Going bigger on industrial
Partners Group’s sale of a $1 billion US industrial portfolio, announced last week, was notable for both its scale – consisting of 8.6 million square feet across 88 industrial properties – and its high-profile buyer, which is understood to be AIG Global Real Estate. But the portfolio – assembled from three investments made between July 2018 and August 2019 – was just a small piece of the industrial pie for the Zug, Switzerland-based private markets investment manager. Even with this large exit, Partners Group has still approximately 43 million square feet of industrial real estate globally, including 15.3 million square feet in the US. The firm also intends to grow that sector exposure, Mike Bryant, Partners Group co-head of private real estate told PERE: “Bigger picture, we will continue to invest in US industrial real estate in the near and longer term, particularly where we believe assets have transformational potential.”

Pandemic loss
US commercial real estate investment volumes declined steeply across most property sectors in 2020, according to data from RCA.

A not-so-niche-sized fundraise
Investors continue to jostle for market share in data centers. Last week IPI Partners, a Chicago-headquartered investment firm, announced a $3.8 billion final closing of its second data center fund, IPI Partners II. With investor demand far exceeding the fund’s original $1.5 billion capital raising target, the vehicle has become one of the largest ever commingled private real estate funds focused on the niche asset class. IPI Partners II is being invested in the acquisition, development, leasing and operating of data centers and related assets serving the digital capacity needs of technology companies globally. IPI has managed to raise more than $5.25 billion in total equity capital commitments since its formation in 2016.

A more profitable year for flex office
Although 2020 was a challenging year for flexible office providers as they grappled with discounted prices and reduced occupancy levels during the pandemic, operators were still more profitable than they were a year ago, according to a report from Workthere, the flexible office business of property consultancy Savills. Eighty-three percent of respondents in Workthere’s latest survey of flex office firms reported being profitable, up from 79 percent last year. The report suggested this higher level of profitability was the result of operators cutting costs either through the negotiation of rent holidays or by moving from a lease to a management agreement. Asia and Europe represented the most profitable regions, according to the report. In Asia, where rent holidays were less common but management agreements more popular, 71 percent of spaces had profit margins of more than 10 percent, compared to 44 percent in Europe.

Curtains at GIC for Cosgrave
Madeleine Cosgrave (her LinkedIn profile here), head of Europe real estate at GIC, is leaving the role after 22 years with the Singapore sovereign wealth fund, according to React News. The curtain will come down on the career of one of European institutional real estate’s highest profile female executives, at least as far as full-time work is concerned. The UK commercial property news service reports that Cosgrave, who leaves at the end of June, will pursue work as a non-executive director. But where there is an ending, there is a new beginning. Cue Tracy Stroh (her LinkedIn here), another 20-year veteran at the organization, as her replacement. Stroh has held senior roles at GIC in all three major regions.

Hodes Weill continues hiring spree
Hodes Weill has appointed Michael Mendelsohn [his LinkedIn profile here] as principal, the latest in a series of strategic senior-level hires by the advisory firm to expand its global distribution platform. Mendelsohn, who will be based in New York, was previously a principal at Blackstone, where he spent a decade working in business development, capital raising and client engagement for the New York firm’s private and public funds. At Hodes Weill, he will be responsible for covering institutional investors and consultants in North America. The firm has made other similar hires in recent months, including bringing on Rima Batal (her LinkedIn here), Yoshiko Nakamura (her LinkedIn here) and Alexander Sadighi (his LinkedIn here), as vice-presidents to cover European and Middle Eastern, Japanese and North American institutions.

Mubadala’s Australian logistics debut
Abu Dhabi sovereign wealth fund Mubadala has reportedly made its entry into Australian logistics as the country’s real estate market has been become increasingly globalized. To make its debut, the investor has teamed up with KKR and logistics platform LOGOS for a $1 billion joint venture to invest in developments in the country. The investor’s foray into the market has further proved Australia’s appeal to global capital, as one of only two countries in the Asia-Pacific region with AAA credit ratings from all three credit rating agencies. Approximately 50 percent of Australia’s buy-side real estate transaction activity – predominantly in the office and logistics sector – in Q1 2021 came from foreign capital, the highest quarter-on-quarter percentage since 2009, according to CBRE.